The council also approved a memorandum of agreement with the International Brotherhood of Electrical Workers adding $8.50-per-hour to the base wage for journeyman metermen and electricians.

The bird-baiting ordinance passed in first reading. Two people spoke in  opposition during public comment. Martha Thomas is co-owner of Sourdough Tours, which started baiting eagles at its property near The Plaza mall this summer. 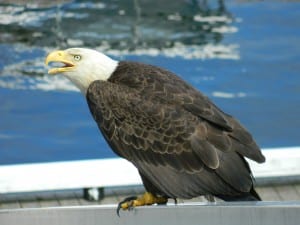 Thomas said the ordinance starts the city down the wrong path. It began with a complaint about eagles.

After Sourdough Tours started eagle baiting, residents in the nearby Cedar Point condominiums complained to the city about increased eagle feces; and others expressed concern about safety.

That and worry over “copycat” tours adding to the problem prompted the council to move forward with an ordinance. It’s based on one adopted in Homer, and calls for a $500 fine for each violation.

During council discussion, the only member to speak against the ordinance was Julie Isom.

“I hate the idea that a company is actually feeding the eagles for profit, but I’m not going to support a law against it,” she said.

The bird-baiting ordinance passed in first reading 6-1 with Isom voting no. It will come back for a second vote.

Also Thursday, the council heard from city employees who asked that raises for some Ketchikan Public Utilities employees be extended to all city and KPU staff. City employees submitted a letter and petition with that formal request.

“The issues of competitiveness in the job market and retention of skilled labor are problems that are citywide, not exclusive to one department as highlighted by the fact that there are more than 20 positions vacant throughout the city,” he said. “The city council has informed us they want to commission another wage study before addressing the issue at hand. However, an exception was made for power linemen. The employees are requesting that the city council treat all employees the same.”

During council discussion later, members agreed that the piecemeal approach is not ideal. Here’s Mark Flora.

“Not to say that these folks aren’t worth their bump, (but) we had a room full of people who made it pretty clear that the way this process is unfolding is exactly the kind of thing that kills morale and drives wedges between people,” he said.

Flora also expressed concern about how to pay for wage increases.

The council also held a public hearing Thursday on a community development grant for Women In Safe Homes to potentially take over and renovate the former Ketchikan Regional Youth Facility. Several people spoke in favor of that proposal.

The hearing is a required part of the state’s process to qualify for the grant.