The second annual Prince of Wales Island-Wide Arts Extravaganza is coming up on Sept. 15th. Last year’s event attracted more than 100 artists and 300 visitors to Kasaan. This year, it will be in Craig.

Prince of Wales Island is a big island with many small communities. And those communities contain many creative people. 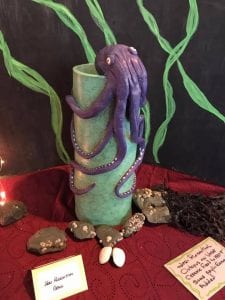 A list of artists contributing to this year’s POW Arts Extravaganza includes residents of Craig, Klawock, Kasaan, Thorne Bay, Hollis, Coffman Cove, Hydaburg, Naukati, and Port Protection. They will all be in Craig for the big fair, filling that community with art, music and more.

Cat Klinkert is one of the organizing volunteers, an artist and a business owner in Craig. She said the fair is a great way for island artists to market their work.

“It’s very difficult living on an island to get places and to get out there and have people see your artwork,” she said. “This is one place where we could all get together, where we could see each other’s artwork and also promote our artwork.”

Klinkert makes jewelry, sand paintings, baskets and more. She said she’s been creating since she was a little girl.

Annette Sharpe is another volunteer helping to organize the arts festival. She got involved in part because the fair will showcase her father, Stan Marsden’s Healing Hearts Totem Pole. It was carved in memory of Sharpe’s brother, and to celebrate a drug and alcohol-free lifestyle.

A table will be set up during the fair for people to paint rocks, she said. After people paint their rocks, they can “bring them down to the totem pole in memory of somebody or something. And maybe we’ll pass out some roses and remember the healing heart and why it’s here.” 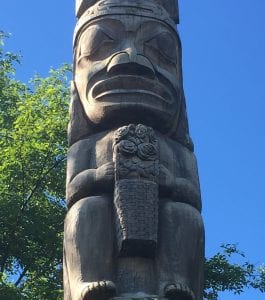 A figure on the Healing Heart Totem Pole holds a basket of roses. (KRBD photo by Leila Kheiry)

Roses are included in the totem pole’s design. Sharpe said her father added them to the carving after someone left a gift.

“Somebody had put flowers on the totem pole when the healing heart was being carved,” she said “Real roses. So, it’s a traditional thing for the totem pole, maybe in memory of somebody that you’ve lost or that you want to remember.”

Gretchen Klein was one of the main organizers of the POW Arts Extravaganza last year, and then again this year. She said the previous art fair was attended by POW residents, and people from Ketchikan.

“The ferry is a quick trip over,” she said. “You can spend the weekend here on Prince of Wales Island and enjoy seeing the different areas.” 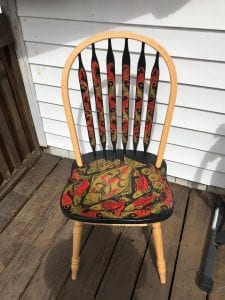 Klein said the day will be filled with art, even before the event officially begins. Some artists are offering workshops the morning of the fair, she said, including a fused-glass jewelry class, and a painting class.

The fair itself is at the Craig Tribal Association building, and doors open at noon.

“And then from 1:30 until 2:30, the Good Food Natural Health Club will be there and they will be doing demonstrations on all the amazing foods they’ve been doing throughout the year on the island,” she said. “So there’s a lot going on. And of course for the artists, there are prizes.”

The good food club is sponsored by the Prince of Wales Health Network and promotes healthy eating.

Klein said they plan to offer as much locally produced food as possible. She said there are prizes for artists, including a grand prize of $500.