Ketchikan artist teams up with paleo-botanist for 2nd fossil book 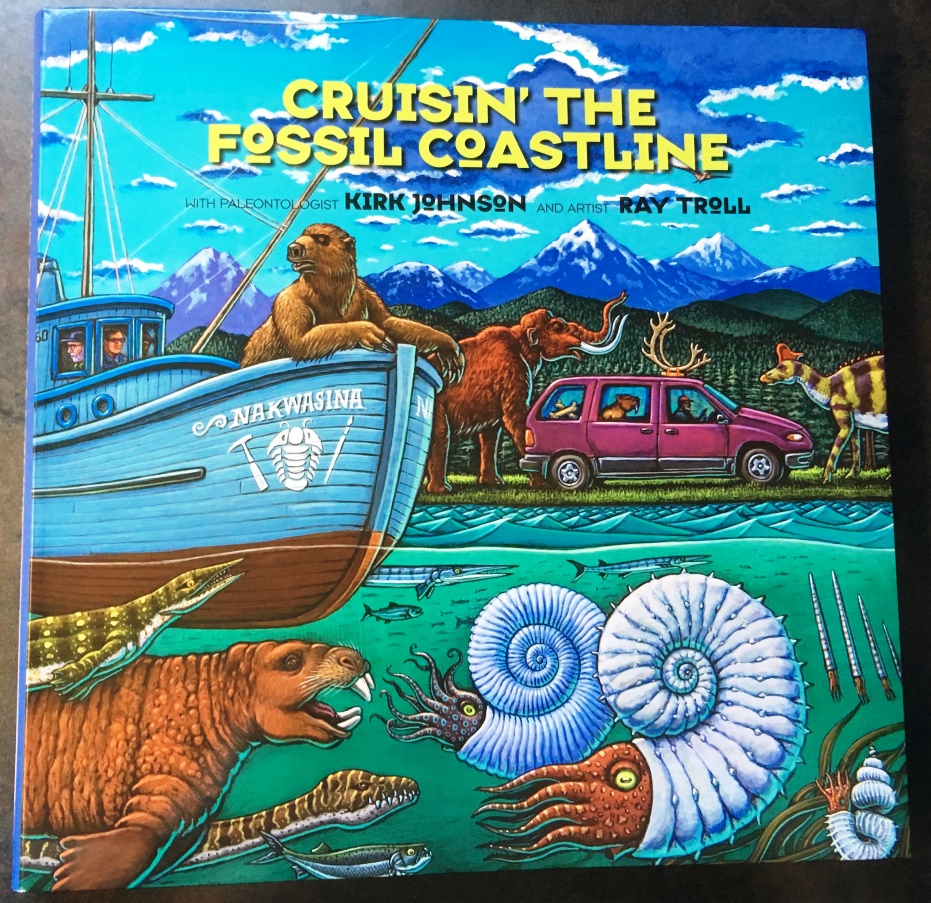 Ketchikan artist Ray Troll has again teamed up with his partner in paleontology, Kirk Johnson, for a new book, the just-released “Cruisin’ the Fossil Coastline.”

“That one was basically the Rocky Mountain States,” Troll said. “Kirk was at the Denver Museum at the time. And this new one is all the way, all the fossil life, we could encounter traveling the West Coast of North America from San Diego all the way to Prudhoe Bay.”

That’s a long distance, with literally tons of fossils along the way, so it makes sense the book took 10 years to complete. While the book is a seamless tour up the coast, the actual journey was broken into a series of trips.

“Kirk estimates – he’s the scientist guy, he keeps track of stuff – about 250 days that were actually spent on the road, so a good chunk of a year that we were traveling to all these spots,” Troll said. “And then, probably about 10,000 miles were covered altogether.”

The result is about three pounds worth of book.

“The day that the book came, I was just overwhelmed of course,” Troll said. “But only then when I opened up the package, I realized that, wow. This is kind of a brick! There’s a lot. There’s a lot in here.” 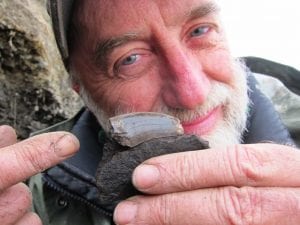 What’s in there is a whole bunch of new, original, full-color artwork by Troll, illustrating Johnson’s vivid descriptions of life along the West Coast billions (with a B!) of years ago.

I spoke to Johnson by phone from Washington, D.C., where he is the director of the Smithsonian Institution’s National Museum of Natural History. Like a good paleontologist, his tale of the new book goes all the way back to the beginning.

“I knew about Ray Troll from the early ‘80s. I grew up in Seattle and was in the fishing industry down in Seattle and we started seeing these crazy T-shirts coming out of Ketchikan,” Johnson said. “So I had the Spawn Till You Die and Humpies from Hell shirts. I worked at a cannery in the San Juan Islands.”

Johnson later saw some of Troll’s fossil imagery, and decided it was time he traveled to Ketchikan to meet the artist. That was 1996, and the meeting spawned a close friendship and 20-plus years of collaboration linking science and art.

Johnson said after the first book was completed, he decided he wanted another “Troll Project.”

“So we, both being West Coast people, thought what a cool idea to travel the West Coast from top to bottom,” he said.

Or, bottom to top. Depending on how you look at it.

They started in Southern California, with a visit to the La Brea Tar Pits, and headed north. Troll said the research was funded through a Guggenheim fellowship, which covered all the travel.

And, yes, the book took 10 years, Troll said, “but for me, it was really more of a lifelong kind of journey. If you do end up reading the book, there’s kind of this culmination as we go – and we literally did start in California and worked our way, slowly worked our way up the coast. So, we began to do this series of trips. By the time we got to Southeast Alaska, we got on the boat, traveled through the islands here to various sites, and went further north. But it kind of culminates on the Colville River.” 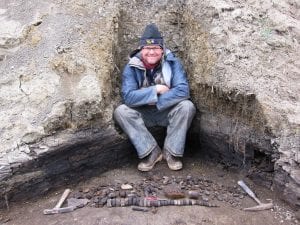 That’s WAY up north. And that’s where Troll fulfilled a childhood dream that he’s held onto long into adulthood.

“There I was, digging a hole, happy as a little clam, and finally found a Tyrannosaur tooth. An Alaskan Tyrannosaur tooth,” he said. “And it really was just the culmination of a lifetime dream to actually find a chunk of a Tyrannosaur, and to find one in Alaska, too.”

A photo in the book shows a close-up of Troll holding that special tooth, with tears of joy in his eyes.

“I was 58 years old at the time, but still, you can see the beating heart of a 5-year-old within me there,” he said.

You don’t have to go that far north to find fossils in Alaska, though. Johnson said a parallel moment for him was on a beach near Sitka. A film crew was there, getting footage for a Nova special called The Making of North America. Johnson said he was trying to find a fossil leaf on camera, and it just wasn’t working out.

“The tide was coming up and things were looking pretty bleak,” he said. “Ray was kinda ribbing me about it. He was like, ‘You can’t find anything’ We’d split the rock, he’d be like, ‘Big nothing!’ Then we cracked open this rock and it had an entire fossil palm frond on it. And I didn’t even know there were fossil palms at that place.”

Troll made his name as a fish artist, but said his first and lasting love always has been dinosaurs. He hopes to share that through this new book, along with a little knowledge about the planet we all call home.

“But what drives them? What is that all about? How do we survive as a species? What are we doing to the planet?” he said. “But really, to understand the world today and to know what to expect tomorrow, a lot of the answers are under our feet. We need to look to the past to understand the present as we move into the future.”

And for Johnson? What does he hope people take away from the book?

“Most people haven’t really thought about why the West Coast is the way that it is,” he said. “And I think it’s a pretty accessible book and you can poke into it, and I think it has the potential just to kind of bump up people’s awareness about the place they live or visit.”

Now that this book is done, is another one stewing? Johnson said maybe in about a year, he’ll decide it’s time for another “Troll Project.” After all, there’s no shortage of natural history for the two friends to explore.

Troll will be giving a power-point presentation and signing copies of the new book Sunday, Sept. 16th. The event starts at 3 p.m. at the Ketchikan Public Library.