Clearcuts and old-growth forests are part of the view on Prince of Wales Island. (Nick Bonzey, Flick Creative Commons)

About 45 members of the public attended the standing-room-only meeting held downstairs at the Southeast Alaska Discovery Center.  Representatives from the Forest Service and the state were on hand to discuss the status of the Roadless Rule and answer questions.

Deputy Forest Supervisor Troy Heithdecker explained the meeting would not be recorded but people could submit written comments. 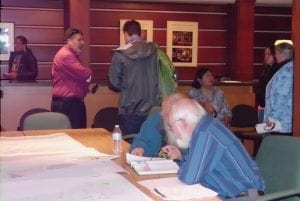 Discussions continue at the end of a Roadless Rule meeing held in Ketchikan September 17, 2018 (KRBD staff photo by Maria Dudzak).

“What we’re here for is to listen to you, listen to the public, the people of Southeast Alaska. We’re here to share some information on the process, on where we are with the process, how you can provide your feedback and stay involved and be informed throughout this process. We’re here to listen to you, to learn from you. And hopefully you can learn some things about us and our cooperating agency, working with the state, on how we’re going to go through this process.”

Several in attendance were upset comments were not being recorded, including Norbert Chaudhary.

“When you say you’re going to listen to us, you’re actually not. It’s going to be in one ear and out the other. There’s no documentation of what people will be saying here this evening.”

Heithdecker reiterated that comments wouldn’t be recorded, but written comments were being accepted that evening or people could submit written or online comments later.

The current rule prohibits road construction and timber harvest, with some exceptions, in areas inventoried as Roadless. The State of Alaska petitioned the Secretary of Agriculture to receive a full exemption from the rule.

Heithdecker says, in Alaska, the Roadless Rule has been under litigation almost continuously since 2001, and a one-size-fits-all plan for national forests throughout the country doesn’t seem to work.  He says the current administration wants to find a long-term solution.

Nicole Grewe is the regional economist with the Forest Service in Alaska. She says to be most helpful, comments should identify specific geographic areas and provide a narrative.

“So with any rezone or land reallocation, there’s a geography component – where, how big, what are the boundaries, what’s most important to you, which piece of land? And for those places that are important to you, what type of activities should be allowed in that area, and what should not be allowed?”

State forester Chris Maisch says the Forest Service and state are in the process of forming a citizen’s advisory committee. The committee will provide up to three options for a state-specific roadless rule.

Maisch says the application deadline to serve on that committee was September 14th, but it was a ‘soft deadline,’ and the team was still looking for more applicants to represent several interest groups including mining, tourism and tribal interests.  Maisch says agencies are working on a tight deadline to get a proposal to the governor by the end of November.

Several in the room commented that Monday night was the first time they heard about the proposal or formation of a committee.  Chaudhary feels a decision has already been made.

“You say you’re trying to keep on a deadline and it’s a soft close and you want to keep this thing moving along. It sure sounds to me like the state and the feds are (in) collusion.  It’s already preordained what the decision is and you guys are just pretending to go through a process here. (Maisch) I respect your decision, but I’d also disagree with you. (Chaudhary) Okay.”

Nora Dewitt is a council-member with the Organized Village of Saxman. She says the council is concerned that there haven’t been meaningful conversations with tribes or adequate public notice. Dewitt says the roadless issue is a matter of life to the Native people.

“Because right now, our lands are in crises. Look at the fishing season that we had. How many of our fishermen ended up in the red? How many of our villages didn’t get the adequate fish that the y needed to preserve?”

She says not just Saxman, but all tribes in the area should be consulted.

Eric Nichols, who works in the timber industry, says more than 90-percent of the Tongass is off limits to land development.  He says the real issue is determining how to proportion the Tongass.

Nichols believes the Tongass needs to be opened to help support the timber industry.

Heithdecker asked people to break up into small groups and continue discussions. He says the final decision will ultimately be made by the Secretary of Agriculture, but now is an opportunity for Alaskans to provide input on a plan that works for the state.

The 45-day comment period on the notice-of-intent ends October 15th. The state and Forest Service are seeking site-specific suggestions. The citizen’s advisory committee is tasked to submit its recommendations to the governor and state forester by November 30, 2018.