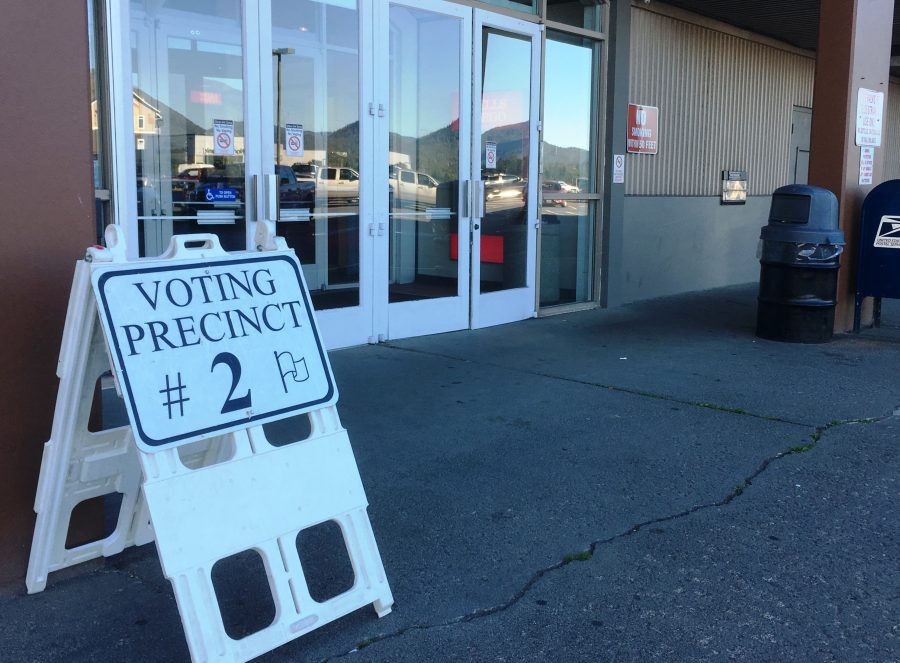 The Plaza Mall is the voting location for the City of Ketchikan’s largest precinct. (KRBD file photo by Leila Kheiry)

With more than 500 absentee and questioned ballots still to be counted, Ketchikan Gateway Borough Assembly incumbent Felix Wong appears to have retained his seat with 1,107 votes. Sven Westergard was in second place with 949 votes, so he appears to have won the second seat open on the assembly.

“It’s been an honor and it’s a role that I’ve never taken lightly and I continue to seek to do my best,” he said.

Westergard works for Ketchikan Public Utilities and is a newcomer to local elected office. While he is unofficially the winner of one of the two seats, he noted the number of absentee and questioned ballots still to be counted.

If he officially wins, Westergard said he’ll be ready to start work.

“Just try to get the lay of the land. Try to see what we can do about the housing,” he said. “Try to get some ideas on how to use borough land … to help small businesses, try to get some more money in this town. Get a good baseline for our future.”

For Ketchikan School Board, incumbent Matt Eisenhower appears to have been re-elected with 1,237 votes. He said he’s excited to get back to work on the board.

“We’ve got a new group of people who are excited to be on the school board and I know and I’m convinced that some wonderful things will change,” he said. “I think it’s going to be a different season moving forward. I’m grateful for that opportunity.”

The school board has had a tough year. The top issue facing the board is ongoing and contentious teacher-contract negotiations.

There were three open seats on the board. The next two top vote-getters Tuesday were Sonya Skan with 1,089 and Rachel Breithaupt with 1,064. However, Bridget Mattson was a close fourth with 1,004 votes.

Those numbers and potentially who has won a seat will be affected by Wednesday’s Canvass Board count of absentee and questioned ballots.

Breithaupt just last week was appointed to a one-year seat on the school board following a resignation. If she does win one of the three-year seats she can choose between the appointed seat and the full term. Breithaupt has said she will choose the full term, and then help the board appoint someone new to the one-year seat.

She said that since her appointment, she’s been having many encouraging conversations.

“I believe the people involved in schools and the school board, and I believe that the superintendent, want the best education our kids can get,” she said. “That includes healthy, happy and appreciated educators and support staff.”

Lana Boler had been appointed to a vacant school board position in February and was running to retain that seat. She was in fifth place by the end of Tuesday’s count, with 689 votes.

For the City of Ketchikan, unofficial results show that incumbent Ketchikan City Council Member Janalee Gage has won re-election with 691 votes. There are two council seats open this year, and Sam Bergeron appears to have won the second seat with 600 votes.

“It seems like the last two weeks have been so busy I haven’t been able to think,” she said. “It’s nice that it’s kinda over. But it’s not over, because I’ve got three years to go.”

Gage said port development is a big, ongoing issue. She also wants to look into recycling options for the community.

Bergeron served previously on the council. He ran on a campaign of tax relief.

“Local government needs to wean itself off of taxing food,” he said. “It’s unethical. It hurts too many people who are struggling in our community. I’m hoping I can incrementally take baby steps and year by year add more things to the list.”

Others running for council were Spencer Strassburg (355 votes) and Dragon London (298).

The City of Ketchikan also has a new mayor. Bob Sivertsen, who had just completed a term on the council, was unopposed in his bid for mayor. He takes over from longtime Mayor Lew Williams III, who chose not to seek re-election.

“You know, I just kinda follow Lew around,” Sivertsen said. “When Lew was appointed as mayor, I was appointed to his seat on the council. Now, I’m following him into the mayorship.”

Sivertsen said he looks forward to the new position. He won’t be able to vote at the council table anymore, except to break a tie, but Sivertsen will be “guiding the ship,” as he put it.

The Canvass Board meets Wednesday to count all outstanding ballots. Those results usually are available late that afternoon.