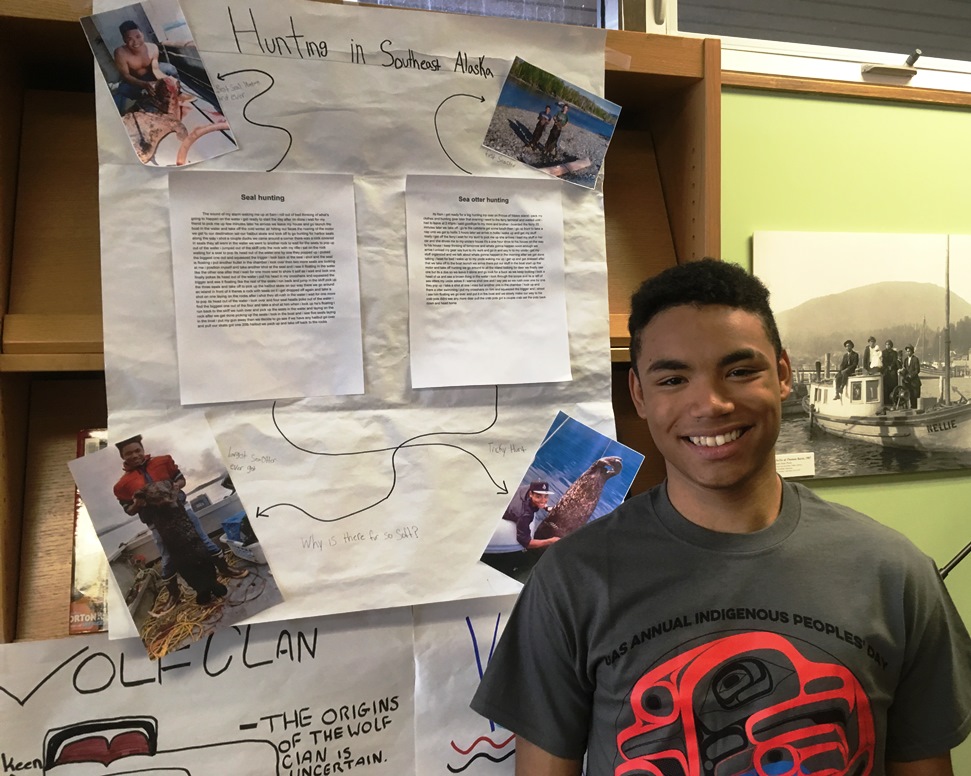 Monday marks the second year for Alaskans to commemorate Indigenous Peoples Day rather than the federal Columbus Day holiday. In Ketchikan, the local UAS Campus Library hosted a celebration of indigenous culture.

A table is filled with food made from traditional ingredients: smoked salmon, beach-asparagus dip, berry jams and scones. High school students from the Tribal Scholars program are gathered, filling their plates.

Those students, all Alaska Native or Native American, made posters that are hanging on the walls of the UAS Ketchikan Campus Library. Each poster represents Native culture, in any way the student chose.

But, teacher Barbara Morgan said, it had to follow the theme of “Sense of Place,” and she made the assignment specific to science because that’s her area of specialty.

“So I also had them use their senses to make an observation that would tie into the scientific process that starts with an observation,” she said. “They did a good job.” 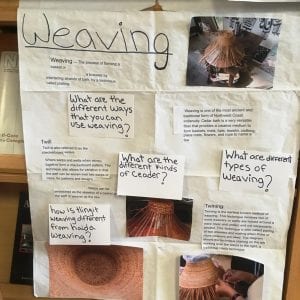 Students in the local Tribal Scholars program made posters for Indigenous People’s Day, celebrating an aspect of their Alaska Native culture. (KRBD photo by Leila Kheiry)

Ronny Robert Pungowiyi is Siberian Yupik, and his poster is about seal and sea otter hunting.

“It’s one of those things I grew up on, (that) my father taught me how to do,” he said. “Hunting and fishing. Seal and sea otter is my most favorite things to hunt.”

Pungowiyi said he learned the traditional hunting methods, and has been hunting since he was 2 years old.

He said Indigenous Peoples Day to him means learning where he came from.

Brooke Edenshaw said the day helps Alaska Natives be proud of who they are. Her poster focuses on the Kuspuk, a traditional Yupik garment worn by women.

“They were initially to keep fur parkas clean and they were made out of animal gut and skin,” she said. “Now they’re commonly made out of cotton and silk, and designed with rikrak.”

Edenshaw is Yupik, and said she has a couple of Kuspuks at home, but she’s outgrown them.

In addition to the posters, some tables in the library display traditional items made by Alaska Native residents. Merle Hawkins makes all kinds of products from devil’s club. She said the formidable plant hides important traditional medicine under all those thorns.

“I brought a fresh piece of devil’s club so they could see it, feel it, smell it, touch it,” she said. 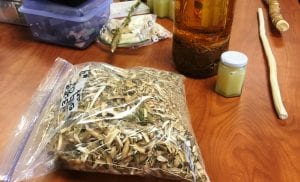 Merle Hawkins harvested and dried devil’s club bark, which can be used for medicinal tea and ointments. It’s a traditional medicine that Alaska Natives in Southeast have used for thousands of years. (KRBD photo by Leila Kheiry)

But, usually you don’t want to touch devil’s club.

“Oh, I softened it up some,” Hawkins said. “I scraped the thorns off right away.”

And how does she harvest it without hurting herself?

“I use thick leather gloves. I saw it down. First thing I do is scrape the thorns off,” she said. “Then you get, there’s a thin brown layer of bark I scrape that one off next. Then the green layer, that’s the third layer, that’s the bark for the medicine.”

Hawkins said that green layer can be dried and used as a medicinal tea for arthritis or stomach problems. It also can be put in a jar with olive oil. After a while, the devil’s club bark infuses the oil with its medicinal qualities, and the oil can be used to make ointment and other products.

Hawkins is Haida, and said local indigenous people have been using devil’s club bark for thousands of years. They learned about it from watching bears rolling on the thorny plant.

“In the summertime, the needles and everything they slough off because the sap is flowing, and then it’s real moist next to the bark,” she said. “So, good medicine even for the animals.”

Hawkins said to her, Indigenous Peoples Day highlights the challenges Alaska Native have overcome, and their resiliency in maintaining their culture.

Note: The Tribal Scholars program is a cooperative effort between Ketchikan Indian Community and the Ketchikan School District. It provides an alternative education model with a focus on Alaska Native traditions.