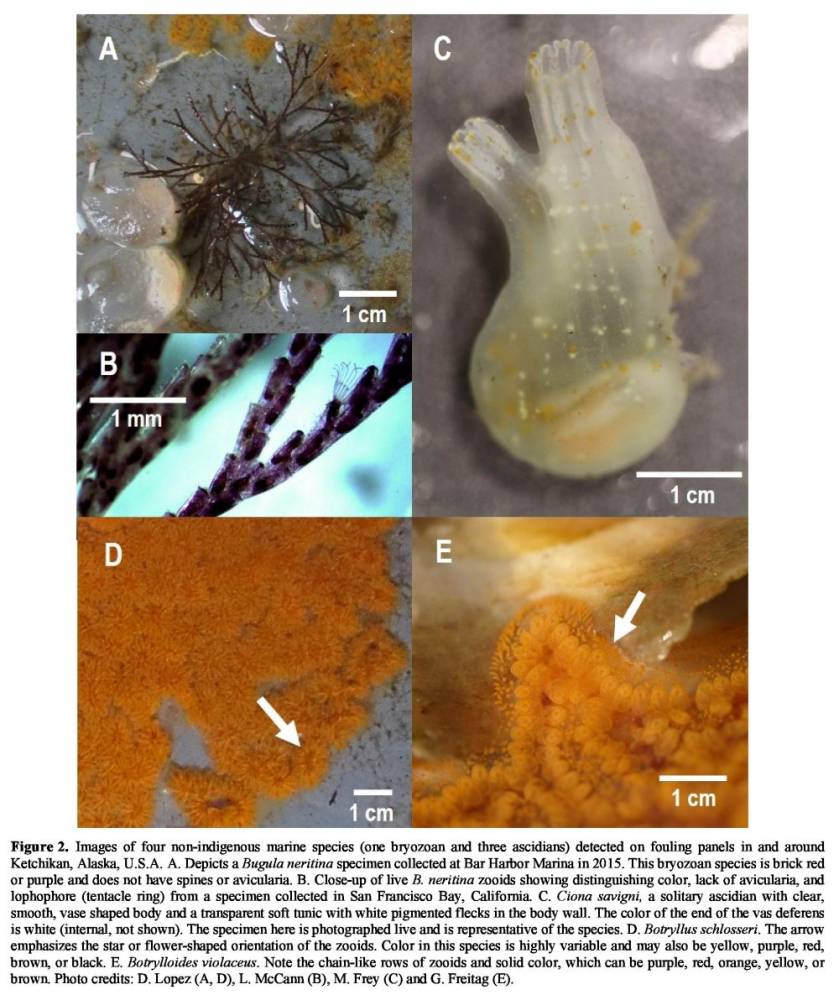 This converted PDF from a paper published in Bioinvasions Records shows organisms found during a study of marine invasive species in the Ketchikan area. The images labeled A and B are of the new species, previously not seen in Ketchikan. (Image used with permission from Gary Freitag)

With the help of area volunteers, a team of researchers has identified a previously unknown invasive marine species in Ketchikan. The bryozoan has never before been seen this far north.

Bugula neritina is a tiny moss-like invertebrate made up of purplish skinny branches. The filter feeder was among many creatures found growing on several hundred special panels that had been submerged in harbors around Ketchikan.

Unlike the other organisms found, though, Bugula neritina had not been seen before in Southeast Alaska. The bryozoan became the subject of a peer-reviewed article published recently in the academic journal, Bioinvasions Records.

Invasive species are always a concern and something to keep an eye on. But Freitag said, for the moment, the newly identified species, and other invasive marine species are not a huge problem in the Ketchikan area.

They could become a problem later.

“Invasive species have a habit of lying dormant for long periods of time once they’re introduced to an area,” he said. “But when the conditions get perfect, they can expand very rapidly. It’s very common for them to do that.”

And a changing climate could prompt such an expansion.

The new marine invasive species now joins others that were already known to be in Southeast Alaska. Those are all tunicates, or sea squirts.

A different kind of invasive species Freitag has been watching for is the European Green Crab.

“We still have not found one here. We hopefully will never find them,” he said. “That’s another species we don’t think can propagate here because the temperature is just a little bit too cool. But one degree might be enough to cause an issue.”

“Things are used to eating certain things and go after those. When they see something new that’s not from this area, they tend to ignore it,” he said.

Invasive marine species often are brought in by boats traveling up and down the coast. Freitag said cleaning a boat’s hull and all the nooks and crannies creatures can hide in will help stop, or at least slow, the spread of invasive organisms.

It’s important to know what’s out there, which makes the scientific study so valuable. Freitag said the research team was in Ketchikan as part of a larger study of marine organisms.

“And they were looking at diversification of organisms, which is what kinds of organisms, how many of the different species, occur at different latitudes,” he said. “This was a National Science Foundation project that spanned over latitude. They went from Panama to Mexico to California to Alaska.”

That team comprised scientists from the Smithsonian Environmental Research Center – which Freitag worked with previously – as well as Temple University and University of Alaska Fairbanks College of Fisheries and Ocean Sciences. Local high school and university students also were involved.

Here’s a link to the published study.