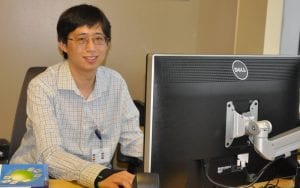 A new psychiatrist has been hired to work at PeaceHealth Medical Group in Ketchikan.

According to PeaceHealth, Victor Chen grew up in a suburb of Los Angeles after his family moved there from Taiwan when he was 5. He went to the University of California at Berkley for his undergraduate degree in biology. After working as an EMT, he went to medical school at the University of Cincinnati. He returned to California for his residency.

According to PeaceHealth, Chen was looking for something different, which led him to Ketchikan. He told PeaceHealth that he got off the plane in July and “it was love at first sight.”

Chen and his wife, Shelly, have two children. He told PeaceHealth that they love hiking and wanted to live by the ocean. He’s eager to try fishing, which he used to enjoy as a child.