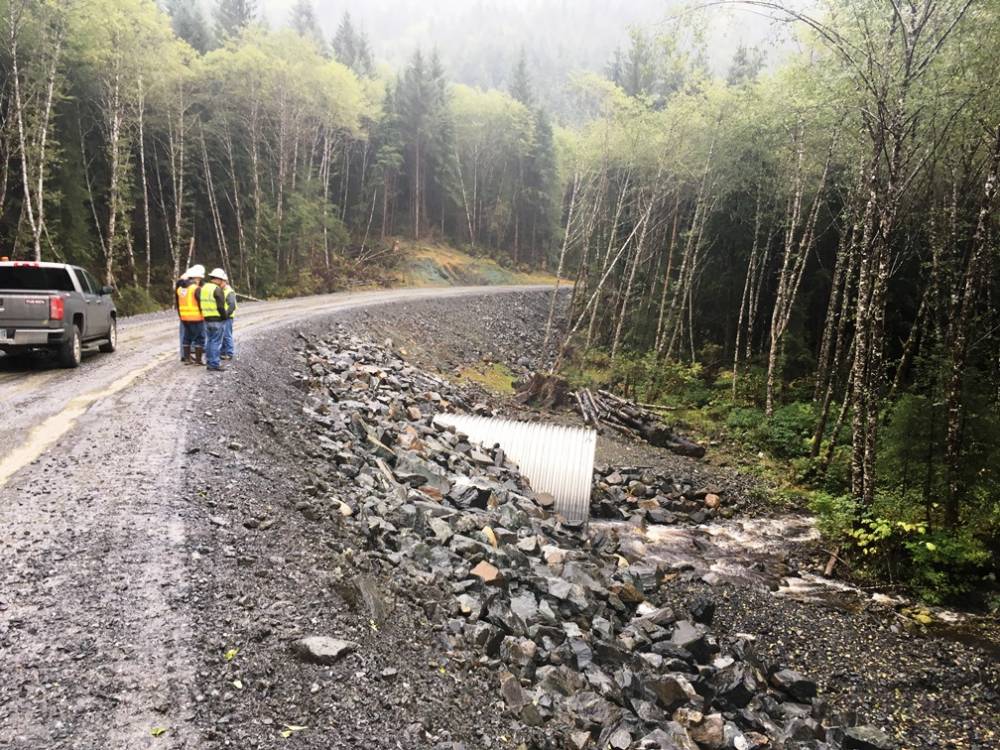 A large culvert allows fish to swim through a stream under Shelter Cove Road, under construction in Ketchikan. (KRBD photo by Leila Kheiry)

Shelter Cove Road in Ketchikan has been talked about for decades. It wasn’t until 2016 that work on the road began. That was after the state secured funding through voter-approved bonds, permits from the Army Corps of Engineers, and easements from various landowners along the route.

The road was supposed to be done by now, but – like many big projects – there have been delays.

The link connecting Revilla Road near Harriet Hunt Lake and a Forest Service Road near George Inlet has been punched through. But there’s still a lot of work left before the public can drive from Ketchikan to Shelter Cove in Carroll Inlet. 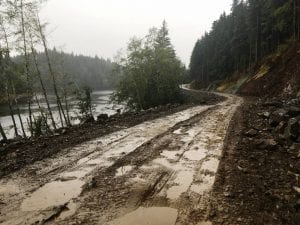 “This is a construction site. I don’t think we have any open trenches at the moment, but there’s a lot of heavy equipment out there. The main safety feature when you’re around heavy equipment is to make sure whoever is operating the equipment sees you,” Vic Winter, DOT’s Southcoast Region construction engineer, gives a safety briefing as we head toward Revilla Road.

Project engineer Greg Cvitash is driving our small group in a four-wheel-drive truck on this rainy October day.

Phase One of the overall project is done. That was relatively easy: Just resurfacing an existing road that leads over land owned by Cape Fox Corp. Phase Two has been challenging, requiring tree removal, filling in muskeg and blasting rock to level out the often steep terrain.

“We still have a fair amount of blasting to do, right?” Winter asks.

“We do, right,” says Cvitash “This year, there’s been several rock cuts that we’ve expanded, opened up, built benches for the road. And we’re currently still widening for the road embankment. We’re blasting into the hillsides.”

When Phase Two is complete in, they hope, mid-January, funding for Shelter Cove Road will be used up. Winter said the project will need another appropriation before Phase Three can go out to bid.

A map on the wall of K&E Alaska’s office shows the Shelter Cove Road route. (KRBD photo by Leila Kheiry)

“Phase Three is a follow-on project to replace some of the log-stringer bridges and some culverts,” he said. “At the completion of Phase Three, the road will be open to the public.”

Until then, the road is off-limits. That restricted access has made some people unhappy. Hunters, especially, had hoped to use the road – finished or not. And some people did access it, by repeatedly ripping the padlock off a gate blocking the road.

“We thought they were cutting the locks off, but we finally figured out what they were doing was tying a chain to our gate and just yanking it with their vehicle,” Winter said. “So, they were also destroying our gates.”

Winter said DOT is obligated to keep the gate closed and locked. If they find it open, they have to close it and put a new padlock on. That has been a problem for people other than the lock-ripper who drive through, and then get stuck on the wrong side of a locked gate.

“People would call the DOT maintenance crew to come out here and let them out,” he said. “And you can see what a long drive it is to get out here. So after a number of times, they took the gate down and laid it on the side.”

That pleased those who want access, but not the landowners. The gate is back up, and Winter said DOT is monitoring it to determine who keeps ripping off the locks.

Once the road is complete and open to the public, a series of gates will be in place to control access to any side roads leading into private land. 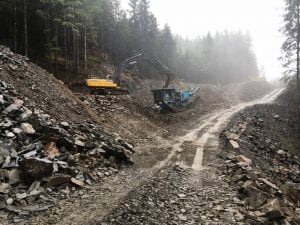 A rock crusher crushes shot rock, which will be used as fill on other sections of Shelter Cove Road. (KRBD photo by Leila Kheiry)

Again, though, that’s going to take a while. The project was supposed to be completed last October. Winter said there were some problems with the first contractor, Wilson Construction. DOT terminated their contract last December, and re-bid Phase Two.

The current contractor is K&E Alaska out of Sitka. They were able to start work this spring, but were a little late for what Winter calls the “fish window.” There are quite a few fish streams along the route, he said, and work is allowed on those streams in June and July. That’s it.

“So out of the whole year, you have 60 days to do these fish pipes,” Winter said.

The pipes are large culverts that allow a stream to flow naturally underneath the road. Four are installed, and they have four more to go. Those four probably will have to wait for Phase Three, though, along with new bridges.

Joe Williams and Scott Kuenzi with K&E Alaska say Phase Two has gone well so far. Ketchikan’s unusually dry weather this past summer helped, although all the blasting was challenging.

Another challenge has been the remote site location. Southeast Alaska residents aren’t used to driving an hour or more one way just to get to work every day.

“Literally an hour and a half by the time you get in and out every day,” Williams said.

And that’s on a one-lane gravel road. Once they get to work, though, the crew works efficiently, using equipment with GPS controls. Kuenzi said that technology lets them go through the route ahead of time and set up a model that’s input into the machines.

Williams said the section they’re excavating now is the most complicated, because of all the required blasting. 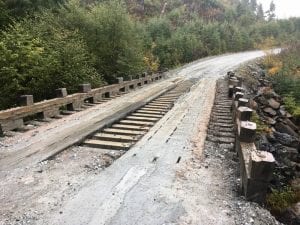 A bridge built by a logging company is one of many that will need to be replaced during Phase Three of the Shelter Cove Road project. (KRBD photo by Leila Kheiry)

“As you go through, it looks like a bit of a mess, but there’s logic to it,” he said.

At the active construction area, there are lots of large, loud machines. All the rock that previously was blasted is loaded into a rock crusher, crushed, and hauled away. The crushed rock later will be used to fill in softer, muskeg portions of the new road.

The road will be gravel the whole way. That’s one piece of good news for the project budget and timeline, because paving in Southeast Alaska can be challenging. Winter said it has to be dry. Really dry, not Ketchikan-dry.

“Sometimes you hear that comment, ‘Oh, we can pave. It’s a dry rain,’” Winter said, laughing. “That must be a Ketchikan thing. But no, you can’t pave in the rain.”

The end of the new road blends into the existing Forest Service road leading toward Shelter Cove. Winter said there aren’t any plans to improve that section of road, but DOT will maintain it once it’s been transferred.

When the whole project is done and open to the public, the road will be 20 miles long, including all the previously existing road. Newly built roadway is about seven miles. The overall cost is estimated between $20 million and $30 million.