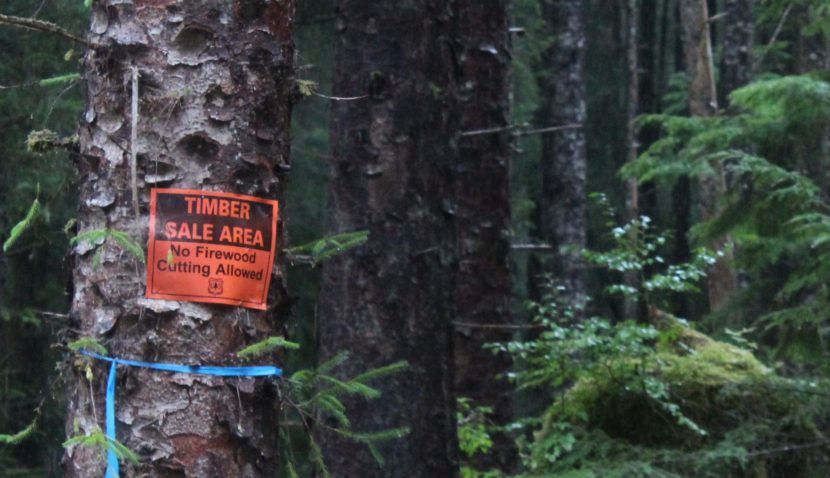 A timber sale sign is posted in the Tongass National Forest on Prince of Wales Island. (KRBD file photo)

Over the summer, Alaska got the go-ahead to propose its own alternative to a federal rule most states have to follow. The Roadless Rule prohibits new roads in wilder parts of national lands.

It’s something the state has been battling for decades. But now, the issue seems to be moving forward. On Tuesday, a citizen advisory committee released new recommendations, which could shape the future of the Tongass National Forest.

The thing to keep in mind about four new options recommended is that they represent a spectrum of ideas about how the Tongass should be managed.

On one end, nothing new really happens. Things stay the same, and road building remains difficult in some parts of the national forest. On the other end, the national Roadless Rule doesn’t apply to Alaska.

“People saw that Southeast rural communities are facing challenges and there are no easy answers,” he said.

Thoms was one of the 12 people appointed by Governor Bill Walker in October to represent various stakeholders around Southeast Alaska. The state has long maintained the region needs better access to logging, energy and mining opportunities, and that would be easier without the Roadless Rule hanging over the Tongass. 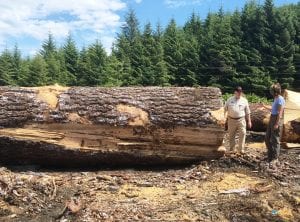 Secretary of Agriculture Sonny Perdue and Alaska Sen. Lisa Murkowski look at some old-growth logs in the yard at Viking Lumber this summer in Klawock on Prince of Wales Island. Perdue announced plans to start an Alaska-specific roadless rule process during that visit. (KRBD file photo by Leila Kheiry)

Thoms said the group agreed they’d like to see a sustainable timber industry kept alive. But where do you strike the balance?

“I think new road building that opens up new areas for logging especially on landscapes like Prince of Wales that’s already been heavily impacted could cause some big problems,” he said.

Two options on the spectrum would scale back some environmental protections.

Right now, the Forest Service can’t build roads through areas with the top salmon producing watersheds, known as the Tongass 77, or Audubon-designated habitat important for wildlife and fish.

And one of the options would do away with both of those protections.

Thoms said the message the committee heard from a lot of the community meetings was to keep things as they are. The Forest Service has received over 140,000 public comments on this. In fact, they’re still combing through them.

But Thoms said they haven’t analyzed the responses yet.

“What we’re hearing from the public …  is that they want to keep the Roadless Rule in place and the public testimony seemed to indicate that people were learning toward a no action alternative,” he said.

At the public meeting in Ketchikan, the community input was more split.

Bert Burkart said that’s not surprising. He’s the President of the Alaska Forest Association, a consultant with Viking Lumber, and part of the citizen advisory committee.

Burkhart prefers option D — the very end of the spectrum. The one that said the Roadless Rule basically doesn’t apply to Alaska. Still, he’d take the closest other outcome.

“But it’s still not what we’re shooting for,” he said.

It’s not what the state is shooting for either.

Chris Maisch, the state forester, said from his perspective: Alaska shouldn’t have to follow the Roadless Rule at all.

“But we think the body of work that was done by the committee it did reflect well what we heard,” he said. “I think everyone that participated could find something about their opinion on this matter.”

Ultimately, it’ll be up to the Forest Service to decide which of the advisory committee’s options will move on for an environmental analysis — with the state acting as a cooperating agency.

It’s expected the public will get another chance to weigh in this summer. A final decision on Alaska’s Roadless Rule is anticipated by 2020.