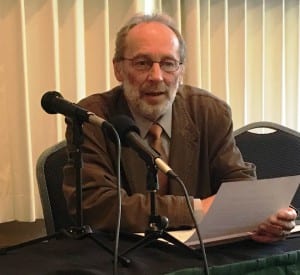 Ketchikan School Board Vice President Kim Hodne resigned from the board on Wednesday, effective immediately.

Hodne said Thursday that he disagreed with the terms of a negotiated tentative teacher-contract agreement. But, he said, resigning was not a decision of the moment.

“It’s not a snap decision, it’s not a decision that’s come by easily by any means,” he said. “There’s been a great deal of thought that’s gone into it for a while.”

The tentative agreement was reached in mid-November. Teachers ratified the agreement last week, and the school board is scheduled to vote on whether to accept it Thursday.

Hodne said he doesn’t believe the three-year agreement is fiscally responsible for the school district. That agreement, and his expectation that it will be approved, added to his reasons to leave the board.

“I looked at the last meeting, I saw there’s a signature line for the vice president on here,” he said. “There’s no way in good conscience that I could sign, put my name on a contract that I’m so much not on board with and will be voting no on as well.”

Hodne said he believes the 2-percent annual raises in teacher salaries and increased health-insurance costs to the district will deplete reserves and leaves nothing for paraprofessionals, who soon will be negotiating a new contract.

“So how do we now take care of the other staff? The other bargaining (groups)?” he said. “It’s just not, in my opinion, well done, well vetted, well thought out.”

Hodne added that throughout the contentious teacher-contract negotiations, the community heard mostly from one side – the Ketchikan Education Association. He said he disagrees with the board’s policy of not countering many of the union’s arguments.

Mostly, though, Hodne said he’s tired. And, he said, he wishes the school board the best of luck.

“I have zero ill-will,” he said. “I’m not angry, I’m truly not frustrated. I honestly am tired. It’s kind of worn me out.”

But, Hodne said, he can continue to add his two-cents when it comes to education policy. He’ll just use a different location – the public comment podium.

Hodne was first elected in 2016, and had one year remaining in his term. The board will have to appoint someone to fill that seat until the next local election.

In an email Thursday, Board President Matt Eisenhower said he’s grateful for Hodne’s two years of service on the board. Eisenhower added that he respects Hodne’s difference of opinion regarding the tentative teacher contract agreement.