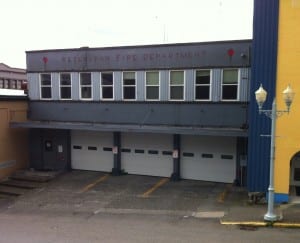 Ketchikan’s Main Street fire station was built in 1943. It’s been vacant and used for storage since 2001, (KRBD file photo by Leila Kheiry)

What to do with the old Main Street fire station is on the Ketchikan City Council’s agenda for Thursday.

The issue came up in early November when local residents hoping to open a distillery in the building gave a presentation to the council. Mark Sivertsen and Travis Robbins told the council that Uncharted Alaska Distillery would offer locally made craft spirits, along with gifts and food.

They told the council that the now vacant 1943-era fire station is ideal in terms of location, size and load-bearing capacity for the equipment. They wanted to either lease or buy the building from the city.

The fire station was vacated about seven years ago when the new downtown station was completed. The old building now is used for storage. Some other parties have expressed interest in the building.

According to a memo from City Attorney Mitch Seaver, if the council wants to sell or rent-out the old fire station, it must vote on whether to surplus the property. An appraisal might be needed to determine fair market value. The council also could consider other criteria, such as proposed uses for the building.

Also Thursday, the council will consider declaring a public emergency so that quick repairs can be made to the sewer line at the city’s Fire Station No. 2 on Tongass Avenue.

According to a memo from Fire Chief Abner Hoage, the problem started on Nov. 23rd when water backed into showers and sinks. Schmolck Mechanical responded and eventually found that a sewer line had collapsed.

The public emergency declaration will allow the city to hire Schmolck to complete repairs without going through the usual lengthy bidding process.

In other matters, the council will consider approving a contract of up to $200,000 with ECG Management Consultants to work on a new lease agreement for the city-owned hospital building. The current lease with PeaceHealth expires in 2023.

Thursday’s meeting starts at 7 p.m. in city council chambers. Public comment will be heard at the start of the meeting.