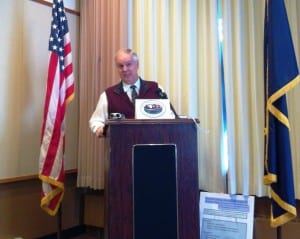 The announcement was made early Monday morning.

Ketchikan School Board President Matt Eisenhower said the board is grateful for Boyle’s service to the district over the past 11 years.

“As many people know, there have been a lot of things that have happened,” he said. “With this resignation, the school board is looking forward to a new leader and CEO of our school district.”

Boyle, too, said on Monday that it’s time for a change.

“There’s a lot of things that have been happening, going on,” he said. “There’s resolution on some of those. We’re moving forward on others.

Two issues, in particular, have loomed over the school district. Teachers had been working on an expired contract and negotiations were not progressing. Shortly after the October local elections, though, a largely new school board was seated and a new contract was successfully negotiated.

The second issue is not yet resolved. That involves a former high school teacher who was charged in the spring with sexual abuse of a minor. Longtime culinary arts teacher Doug Edwards had just retired this spring when he was arrested for alleged sexual assault of a 14-year-old girl at the high school, in his home and in the church where he was a pastor.

A jury trial for Edwards is scheduled for spring of 2019.

Soon after Edwards’ arrest, a personnel complaint was filed with the school board against Boyle, related to the charges against Edwards. Details of the complaint were not made public, but the board hired an independent investigator to look into how the district handled reports about Edwards. That investigation concluded, and a full report was provided to the board in early December.

Last week, the board met in executive session to discuss the report, and came back into open session to announce a plan for improving the district’s response to reports of sexual harassment. Then on Monday, Boyle’s resignation was announced.

Boyle said the decision to submit his resignation was his alone. He said it was prompted by the various controversies.

“A number of things have happened in the district that have been troubling in the last year and a half,” he said. “Those things percolate up to the top and I’m at the top. And so, I’ve got to say there it is and address that issue and offer the road for new beginnings and changes.”

Eisenhower declined to say whether the board asked Boyle to resign. Eisenhower did say that the board was committed to moving the district in the right direction.

“Particularly concerning performance and school safety and creating an environment for well-rounded people,” he said. “We know that with the teachers and staff in place, there’s a great foundation for that. Although we’ve had some bumps recently, we know there are clearer skies ahead.”

The district’s Curriculum Director, Beth Lougee will step in as acting superintendent. Eisenhower said Lougee has a lot of experience and the board has faith in her ability to lead the district while the board decides what steps to take next.

Eisenhower said during its Jan. 9th meeting, the board will vote on whether to accept Boyle’s resignation.

Boyle said he will consider other education-employment opportunities in Alaska and, perhaps, Washington State.

“Superintendent of Schools, Mr. Robert Boyle, has submitted his resignation effective at 4:00 p.m. today. Mr. Boyle has served the District for 11 years and has overseen many transitions and important milestones over the course of his tenure. The District would like to thank Mr. Boyle for his service to our students, staff, and community.

“Mr. Boyle stated in his resignation letter that he believes now is the time for a new superintendent to lead this district into the next phase of excellence.

“Effective at 4:00pm today, Beth Lougee will serve as acting Superintendent until the School Board appoints an interim or permanent Superintendent which matter the Board will take up at its January meeting. Ms. Lougee has over 22 years of service in all levels of education. She holds an Educational Specialist Degree in Superintendency and currently holds an Alaska Administrative Certificate as well as elementary education, special education and K-12 Counseling endorsements. Currently Ms. Lougee is serving as District-wide Curriculum Director and oversees Federal Programs, Assessments and Professional Development. Ms. Lougee is working closely with School Board leadership during this transition and brings a tremendous amount of leadership.”

*This report has been updated throughout.*