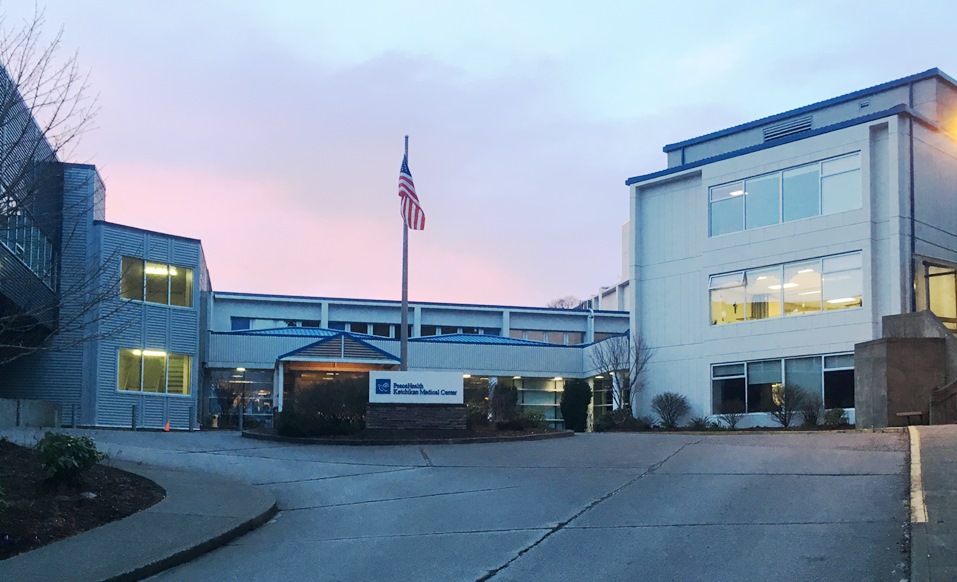 PeaceHealth Ketchikan Medical Center. The hospital building is owned by the city and managed by PeaceHealth. (File photo by Leila Kheiry)

Concerns over possible conflicts of interest prompted the Ketchikan City Council to defer voting Thursday on a contract with ECG Management Consultants.

The consulting firm has negotiated an agreement to help the city with a new lease for the hospital building. PeaceHealth has managed the city-owned hospital since it was built, but there has been talk of inviting other providers to submit proposals. The current lease expires in 2023.

Concerns arose when ECG contracted with PeaceHealth for work outside of Alaska; and when one of the likely Ketchikan team members revealed he was working with Southeast Alaska Regional Health Consortium on another project.

Ketchikan City Manager Karl Amylon told the council that nobody working specifically on the Ketchikan project would also be working with PeaceHealth. Assistant City Manager Lacey Simpson added that if the city decides to seek proposals from alternate providers, there is a plan in place.

“Kevin Kennedy is the lead on the SEARHC project with ECG currently,” he said. “But if the council decides to move forward with exploring alternate providers, SEARHC perhaps being one of those providers, Kevin Kennedy will no longer be part of the Ketchikan project.”

Council Member Julie Isom said that was the first she had heard of Kennedy’s conflict, and that made her even more concerned.

In the council packet published before the meeting, a memo written on Dec. 20 specifically states that Kennedy is working with SEARHC. That conflict also was mentioned during a previous council meeting, which Isom attended.

Isom and Council Member Judy Zenge said they would vote against the contract with ECG. Two other council members – Sam Bergeron and Mark Flora – were absent Thursday. That means the motion would not have had enough votes to pass, even if the majority supported it.

At least four yes votes are required for a motion to pass.

Council Member Dave Kiffer suggested deferring the vote so a full council could make the decision. The council agreed to delay it until the next meeting.

Amylon said if the council does eventually reject the contract and restart the process, it would be a full year before the city will have negotiated a contract with a new consulting firm.

Juneau officials have not yet said publicly whether they plan to appeal the Dec. 6th ruling by Judge H. Russel Holland. In his decision, he says the head tax is OK, but that revenue needs to fund infrastructure that directly supports the cruise ships.

While that ruling was the result of a lawsuit filed by the cruise industry against Juneau’s head-tax spending, the decision likely affects all communities that receive head tax funds.

Also Thursday, following an executive session, the council voted unanimously to support the City and Borough of Juneau if that community chooses to appeal a recent ruling by a federal judge that limits how communities can spend cruise ship head tax funds.

The motion states that the City of Ketchikan will file an amicus brief, also known as a “friend of the court” brief, in support of Juneau’s potential appeal; and will help finance that appeal, with an initial amount of up to $100,000.

Council Member Janalee Gage was the only one to comment on the motion.

“We as Southeast communities need to start working together, to be more supportive of each other so that we’re in control of our communities and our tourism industry and not being controlled by out(side) sources,” she said.

In other matters, the council voted unanimously in first reading to increase wastewater rates by 6 percent, electric rates by 3.5 percent, and most water rates by 5.5 percent. Water rates for seafood processors are due to increase 35 percent. All of those increases must come back for a second vote before they are official.

The next council meeting is Jan. 17.