Chamber recognizes Meck as Citizen of the Year 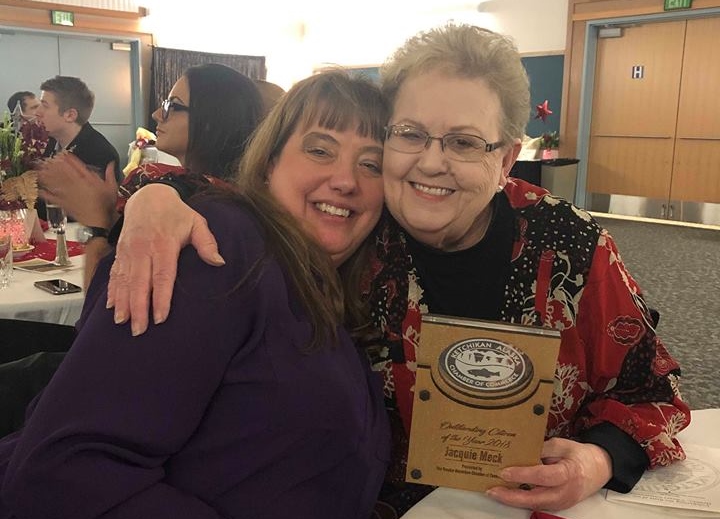 Jacquie Meck (right) with Kelly Jenks at the 2019 Celebration of the Stars Gala (photo courtesy of Kelly Jenks and Terry Smith).

On Saturday, the Greater Ketchikan Chamber of Commerce held its annual gala and awards ceremony. This year’s theme was “Celebrating the stars of our healthy, vibrant community.”

The Emerging Leader Award is given to a person who sets themselves apart through their hard work and dedication to their job and community. The recorded announcement was given by Alexandra Vrabec, social media, public relations and video production manager for Ketchikan Public Utilities.

“Through her work and her community activities, she absolutely exemplifies what it is to be an emerging leader. She is also unable to be at the Celebration of the Star’s Gala evening so we’ve asked her to read a nomination, that she didn’t know was hers, on camera so that we can tell her right now, congratulations to myself, for being our emerging leader of 2018.”

Vrabec gave a small smile when she realized she was the winner.

“I love you Ketchikan. And thank you.”

Jacquie Meck was named Citizen of the Year. Terry Smith and Kelly Jenks made the announcement.

“A lot is unknown about what has been done by this person…because they work behind the scenes a lot, give lots of time and help with Crime Stoppers, with the hospital foundation, with the Chamber of Commerce, with Ketchikan Gateway Borough Planning Department, and March of Dimes in the past.  And then it goes on and on and on all the way back to the 80s.”

Smith and Jenks acknowledged Meck’s volunteerism and commitment to fundraising for many organizations.

Several other awards were presented Saturday night. Carolyn Wilsie was named Outstanding Volunteer, primarily for her work with the Ketchikan General Hospital Auxiliary; Jaimie Palmer, owner of the Captain’s Lady, was named Entrepreneur of the Year; and Bay Company was recognized as Business of the Year.

Two Vocational Services Awards were given. Ken Horn was honored for his work with youth and welding programs, and nurses Bethany Chartier, Sherity Kelly and Rachel Welk were also recognized.