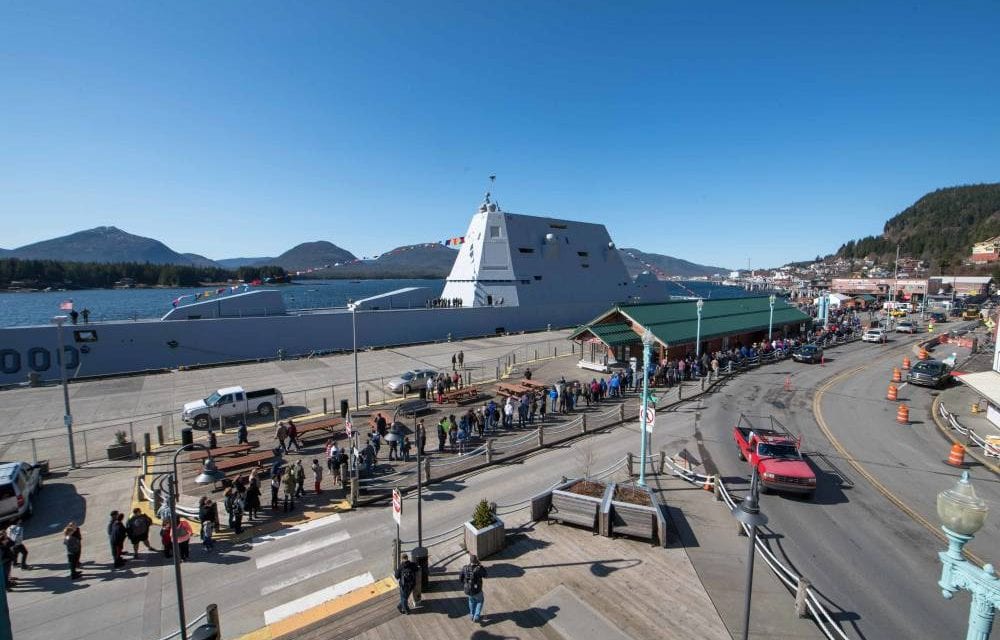 A next-generation, multi-mission Navy destroyer made a stop in Ketchikan last weekend.  The visit drew curious crowds, and brought about 150 crew members to port.

With its steep angles, blocky gray exterior, minimal windows and mostly hidden gun turrets, the USS Zumwalt looks somewhat like a battle cruiser from a Star Wars movie. That was the common sentiment heard from bystanders as the Navy destroyer approached the dock in downtown Ketchikan. The visit provided an opportunity to resupply, meet local dignitaries and offer tours to the public.

The Zumwalt is the namesake of the first ship in its class. She’s 610 feet long, more than 80 feet wide, and has a speed of more than 30 knots. Captain Andrew Carlson says because of the angles of the ship, design and materials used, the Zumwalt appears smaller on radar.

“We look more like a fishing boat. The irony about what we do in the maritime world is that most ships are really interested in making sure they know where all the other ships are. Warships on the other hand tend to not want to do that all the time, and so that complicates our business of being safe navigators.”

But, he says, the ship’s small signature on the water is taken into consideration.

“We incorporate that in how we maneuver around to make sure that we recognize that people may see us on radar, but we may not actually be on radar as big as we are. So when they finally get within visual range, they’re looking at something that doesn’t exactly match what they thought they were going to see.”

Carlson says the Zumwalt is able to operate as a destroyer both near shore and in the open sea. He says the vessel has cutting-edge technologies in all its systems – weapons, combat and engineering.

“It is similar though to our other ships despite its being advanced in technology. It still provides the same sort of missions that our Navy does as far as critical maritime missions and deterrents, power projection, freedom of navigation and opening the sea lines of communication for free global trade around the world.”

Carlson says the ship was commissioned in 2016, underwent initial testing and was overhauled and upgraded with new equipment in 2017.

“And then we’ve been operating towards the latter end of ’18, and then into ’19 will be a lot of operational test evaluation, and (we’ll) continue to activate the combat systems which was the secondary part of the ship that was installed.”

“I don’t have to have a gender cap, which really opens up talent that other ships might not be able to get. Because once you make a berthing classified as a male berthing, even if it has empty racks, you can’t accept female sailors, even if you’re short-handed. For us, as long as it’s divisible by four, we can do that. So we’ve moved our threshold up to 50 percent, so it’s 50-50.

The Zumwalt-class is named after Admiral Elmo Russell Zumwalt, Jr. According the U.S. Navy website, he was a highly-decorated war veteran who was noted for his “Z-grams,” communications aimed at improving the moral of sailors and reducing racism and sexism in the Navy. Along with the namesake ship, two more Zumwalt-class ships have been commissioned, the Michael Monsoor and the Lyndon B. Johnson.

The Zumwalt is home ported in San Diego, California. She left Southern California on March 8, spent a week in British Columbia, and then headed to Ketchikan for tests at the Back Island Acoustic Measurement Facility in Western Behm Canal. Her next stop?  That information was not available to the public.

Details about the Zumwalt-class and other destroyers: https://www.public.navy.mil/surfor/Pages/Destroyer.aspx