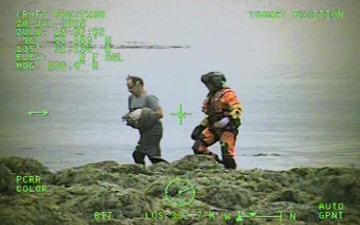 On Saturday, a Coast Guard aircrew and a good Samaritan vessel medevaced the captain of a fish processing vessel after he was injured onboard. The vessel was located northeast of Biorka Island near Sitka when the accident occurred.

At about 10:15 Saturday morning, the Coast Guard received a report that the captain of the vessel Northwind potentially severed several fingers. At the time, an MH-60 Jayhawk helicopter crew from Air Station Sitka was conducting a training flight in the area and heard the call for help. According to a Coast Guard press release, the crew arrived in about two minutes.

Crew on the charter fishing boat North River took the captain from the Northwind onto their vessel and transported him to shore where he was transferred to the helicopter and taken to Sitka.

He was transferred to the Sitka Fire Department emergency medical services for additional care.