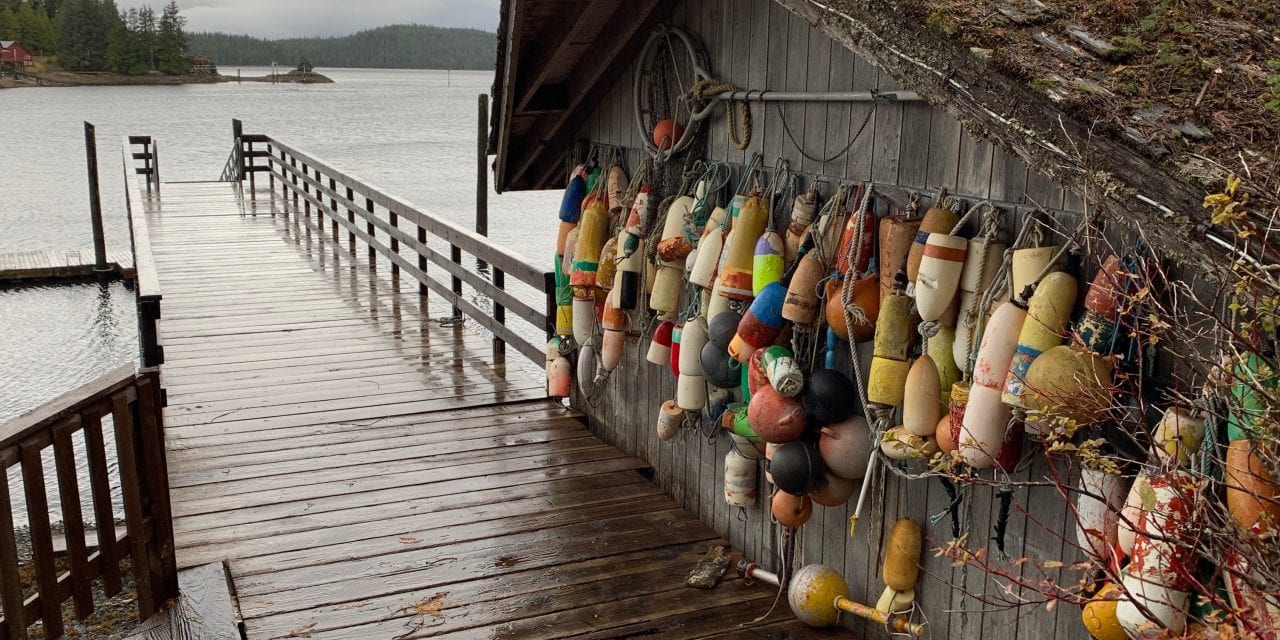 Knudson Cove neighbors delivered more than an hour of testimony at Monday’s borough assembly over a proposed rezone of a residential lot. KRBD paid a visit to the property to find out why a 2-acre parcel is causing so much controversy.

When you pull up to 25 Potter Road, it looks like a pretty normal house 2-story house. There’s a white Subaru parked out front.

But then you go out back, and there’s a magnificent view of Knudson Cove. You can see are kayaks, commercial ship traffic, and fishing boats mingling with whale watching boats. There’s a zip line next door that’s popular with summer visitors.

The property is sandwiched between a cluster of single-family homes and a guiding company offering outdoor tours. Across the water, there’s a commercial marina and a number of commercial docks.

“The marina’s busy, we have commercial — a private float, Christopher Marina right over there,” Nadra Angerman said. She and her husband, Jeff Wedekind, own the place.

“Well, when we moved into this home, it served two of our needs one it was a home and the other is that it had commercial potential,” Angerman said.

Angerman and Wedekind want to get into the action. Their plan is to turn this six-bedroom house into a base for tours. There’s room, they say, for a salmon bake in what’s now the boathouse.

There’s one big hiccup: this property is zoned as low-density residential. In plain English, that means they can’t run a business here. They’re asking the borough assembly to rezone it so they can.

In planner’s language, that would be: general commercial. That covers everything from a mom-and-pop lodge to light manufacturing.

That gave the borough officials pause. The borough assembly heard from neighbors. Neighbors like Lloydine Nordvedt.

“In the 40 years since building our home here, the residential areas are being dwarfed and surrounded by commercialization,” Nordvedt said.

Larry Jackson lives three doors down. He says allowing a business there would be a slippery slope.

“And you now have the perfect example of zoning creep,” he said.

Those arguments were enough to convince the planning commission back in September. It agreed with neighbors that there shouldn’t be a business there and voted against the rezone.

But that’s not the end of the story. The borough’s planning staff had recommended the commission approve the rezoning application for one simple reason: Ketchikan’s land use plan marks this area for future development, says Jonathan Lappin of the borough’s planning department.

“It’s consistent with the future land use map is located at the entrance to the to a neighborhood with a heavily commercialized waterfront area, primarily, and therefore planning staff continues to support it,” Lappin said.

Now the rezone is in the lap of the borough assembly, which is moving the application through the public hearing process.

Concerned parties had a chance to weigh in on Monday, and more than a half-dozen did. All expressed reservations except for one neighbor who gave his support.

The borough assembly added one caveat: it would limit the allowed uses to the kinds of things being proposed.

Taking a lap around the property, Angerman says there’s plenty of space for boat rentals, wildlife tours and events.

“I believe that what we’re trying to accomplish here is not going to negatively impact the neighborhood,” Angerman said. “The waterfront area of the cove is designated to become commercial. And that’s what we’re talking about.”

A second public hearing is slated for October 21 before the borough assembly is expected to make a final decision.