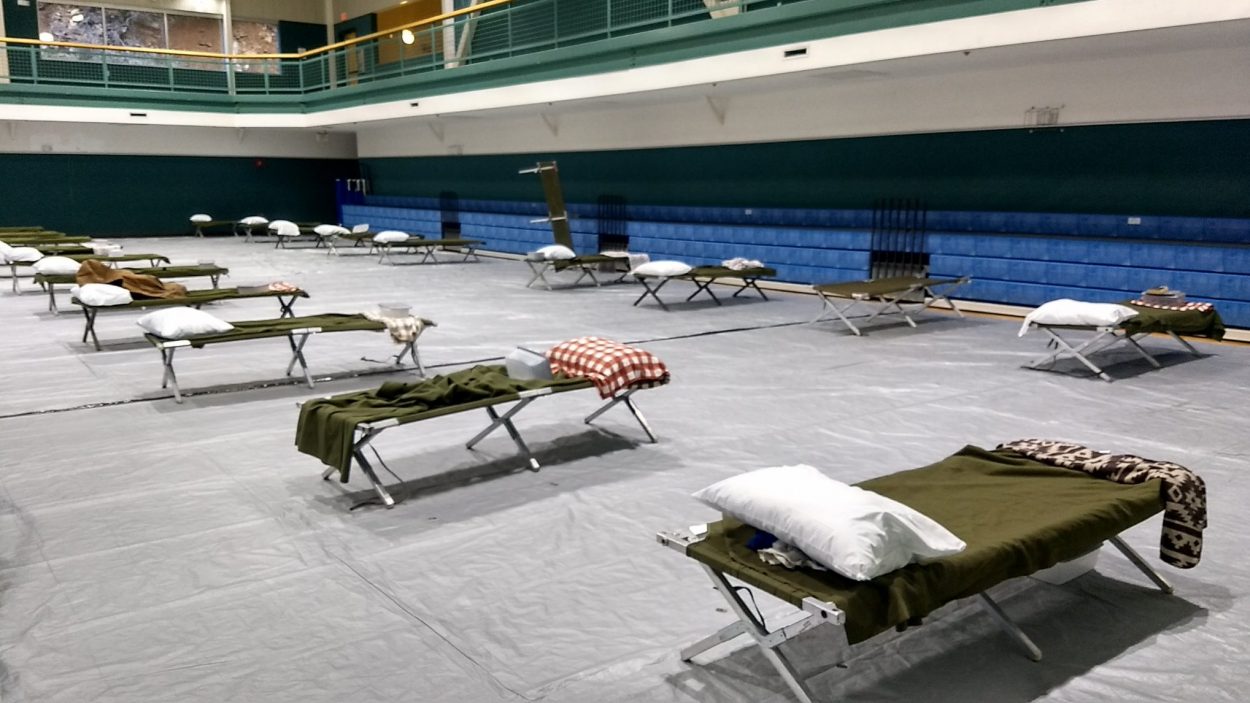 Ketchikan doesn’t usually have a 24-hour homeless shelter. Both downtown facilities are ordinarily closed for large parts of the day.

But that changed earlier this month — at least temporarily — because of the COVID-19 pandemic. Ketchikan’s shuttered rec center is now a shelter that allows some of the community’s most vulnerable people to practice social distancing.

Ketchikan’s borough recreation center is usually a place for people to work on their physical fitness. But as part of the effort to slow the spread of the coronavirus, it’s been closed to the public since mid-March

“This is the most awesome thing that you can imagine up here: perfect, beautiful cots to lie on, army blankets, all the staff — even the girls that are packing guns are nice,” emergency shelter resident Paul Goble told KRBD in a video call Thursday evening. He said he’s spent many nights at First City Homeless Services’ Overnight Warming Center in a downtown Ketchikan church basement. He said people usually get along, but it can be cramped.

“Sometimes you’re playing footsies with somebody,” he said.

At the much larger rec center, Goble said he has room to spread out. Some 30 cots — appropriately spaced, of course — now occupy the basketball court.

But Goble says the biggest benefit is that unlike the downtown shelter, the emergency shelter at the rec center is open 24 hours a day.

“It’s comforting. That’s the best way I can put it,” he said. “It’s comforting not having to worry about packing your bags up every morning and finding a place to stash them and stuff like that.”

But to keep the rec center running around the clock, the staff had to expand considerably.

That’s good news for new hire Randy Rees. Ordinarily, he’d be working at one of Ketchikan’s many restaurants. But with dine-in service restricted and many restaurants closed for the foreseeable future, Rees said he jumped at the opportunity.

“It’s definitely been nice — before this, it was just, like, weeks of just sitting at home,” he said.

He’s getting a lot more than a paycheck out of his new job supervising the shelter’s participants, he said.

“It’s also really nice, like very purposeful work,” he said. “And helping the community and stuff — taking it really seriously but we’re also having a good time, trying to keep everybody really mellow and low energy — but happy.”

“It’s definitely a learning curve for all of us,” she said. “Nothing on this scale has ever been tried in Ketchikan.”

One new challenge is making sure everyone at the rec center is healthy. She says staff use a non-contact thermometer to monitor for fevers. If anyone’s temperature is too high, they’re put in isolation in one of the rec center’s racquetball courts.

And that plan has already been put to use — one participant showed a normal temperature when he first entered the shelter, but started showing symptoms during a regular screening.

“Later on when we did another random, going around doing temperature scans, he scanned a little high,” O’Dell said. “So we were able to contact public health and the EOC and get the ball rolling. So he was tested the next morning for COVID-19.”

As of Friday, she said that test is still pending, and the participant remained isolated in the racquetball court. O’Dell said a nurse is monitoring his condition, and he’ll stay in isolation until he’s cleared by health officials.

But he — and dozens of others without a home — now have a place to stay until at least May 15.

The emergency shelter at the rec center accepts new participants between 7 a.m. and 10 p.m. It’s located at 601 Schoenbar Road and can be accessed on the Green Line bus.

The Park Avenue Temporary Home, or PATH, is also now open 24 hours a day and taking new participants between 5 and 8 p.m. But PATH staff ask those with a recent travel history or respiratory symptoms like a fever or cough to use the rec center instead.