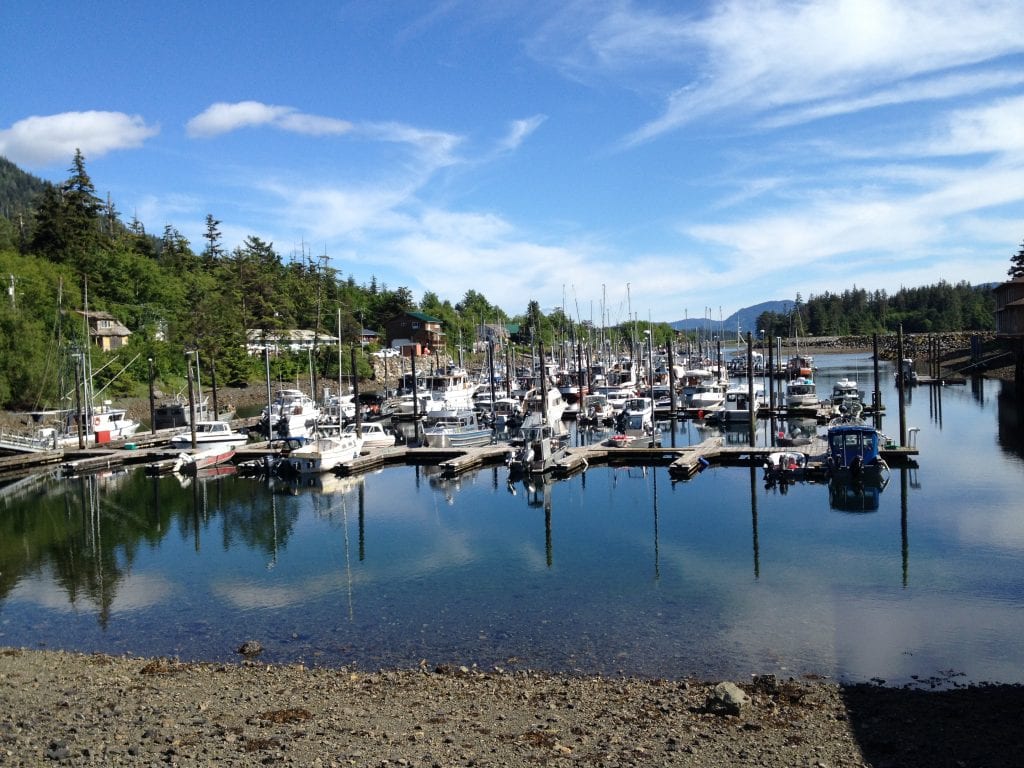 One of Craig’s harbors. The city on Prince of Wales Island is small enough that the state has allowed it to write and enforce its own quarantine restrictions.  (KRBD staff photo).

As the fishing season ramps up, mid-sized coastal towns are finding they have little say over who shows up to work in the industry.

A rule updated last week clarifies that only the smallest, most isolated towns and villages can restrict travel or require a mandatory quarantine period for workers in industries the state deems critical.

One town that’s done this is Craig on Prince of Wales Island. The city of 1,100 people has had two confirmed COVID-19 cases recently.

“And we’ve been told that we have two ventilators on the island on the entire island (of about 6,000 people),” said Craig’s harbormaster Hans Hjort.

In Craig, an emergency order states anyone arriving from anywhere must quarantine for 14 days. That’s keeping out-of-town fishermen from coming ashore. Stores are delivering groceries right on the dock and Hjort says it’s working out fine.

“Nobody’s blatantly come in here and said, ‘I’m doing what what I want to do.’ So most people have been respectful of it,” he said.

But up in the larger fishing town of Petersburg, officials say they’re barred from imposing similar restrictions on the fishing fleet.

Emergency coordinator Karl Hagerman says because Petersburg has a small hospital — and a population slightly over 3,000 people — the state says it can’t impose its own rules when out-of-town fishermen and processor workers arrive.

“We would really like the opportunity to essentially say, ‘No, you’re quarantine — if you’re going to be in Petersburg, you need to be on your boat or you need to be in a certain area,'” he said. “You need to stay put so you don’t potentially spread this virus in our community.”

The city of Wrangell ran into a similar roadblock this month. Wrangell Medical Center, which has just three ventilators, made the island town ineligible to add its own restrictions, state officials ruled.

Meanwhile, authorities in Southeast Alaska’s health care sector are concerned about the influx of plant workers and fishing crew.

“All of the businesses in in Southeast have been complying with the governor’s mandate. And we’re — and we’ve been taking a big economic hit,” Dr. Elliot Bruhl, chief medical officer for Southeast Alaska Regional Health Consortium (SEARHC), which runs more than two dozen hospitals and clinics in the region. “And so, for another industry to come in and sort of say we want to conduct business as usual — it’s really irresponsible.”

He made his remarks during a Tuesday appearance on Talk of Alaska. He says the state’s willingness to allow hundreds of seasonal workers into relatively remote communities is risky.

“If you look at what’s going on right now in the meat industry down down south, you know, they’re having to, they’re having to close lots of meat processing plants,” he said. “And and those people aren’t even living in bunk houses — they’re living in the community.”

For industries to be allowed to move its workforce through communities, they have to file mitigation plans with state authorities outlining how they’ll prevent the spread of COVID-19. That’s created a back log of hundreds of individual plans for the state to review.

The Alaska Municipal League says cities and boroughs have only been able to get copies only when industries share them voluntarily.

“I’m not aware of an instance of the state sharing the critical infrastructure mitigation plan with a local government,” the municipal league’s Nils Andreassen said.

A records request filed by CoastAlaska for copies of the mitigation plans was denied while state officials say they review the approximately 700 plans.

Fishing industry representatives are working with the Dunleavy administration to craft a single, specific mandate for the fishing fleet that would streamline the process and protect communities, says United Fishermen of Alaska Executive Director Frances Leach. She added the fishing industry supports stronger rules than what’s currently required of skippers and crew.

“Quarantine is absolutely necessary and it’s going to be required for any fisherman coming into the state or moving through several communities,” she told KSTK recently in describing an industry proposal to the Governor’s Office.

Back in Petersburg, Hagerman says fishing communities should be able to write and enforce their own rules.

“We don’t want to shut down our economy,” he said. “We want our fishing fleet to operate as best they can. But under the state mandates, we feel that there are loopholes that are just putting our community at risk.”

Gov. Mike Dunleavy has been getting questions daily during evening COVID-19 briefings about how the state plans to manage the fishing season.

Over the past week the governor’s rationale for preventing communities from adding restrictions has varied. He’s argued that towns with hospitals and airports need to stay open as hubs. He’s also said mandatory quarantines could prevent skilled technicians from repairing critical infrastructure.

But local restrictions crafted by coastal villages like Kake and Hoonah — as well as Craig — have carved out exemptions for technicians doing urgent work. And mid-sized towns like Cordova, Petersburg and Wrangell never proposed closing their hospitals.

“Fisheries is huge in the state of Alaska as we know,” Dunleavy said. “What we want to try and do is see if there is a way that we can conduct fisheries in a manner that will still protect the communities and the workers and the people who live in those communities. And so there’s conversations occurring constantly and how we could do that in the various communities.”

He added he would elaborate at a future press conference.

With additional reporting from June Leffler in Wrangell.