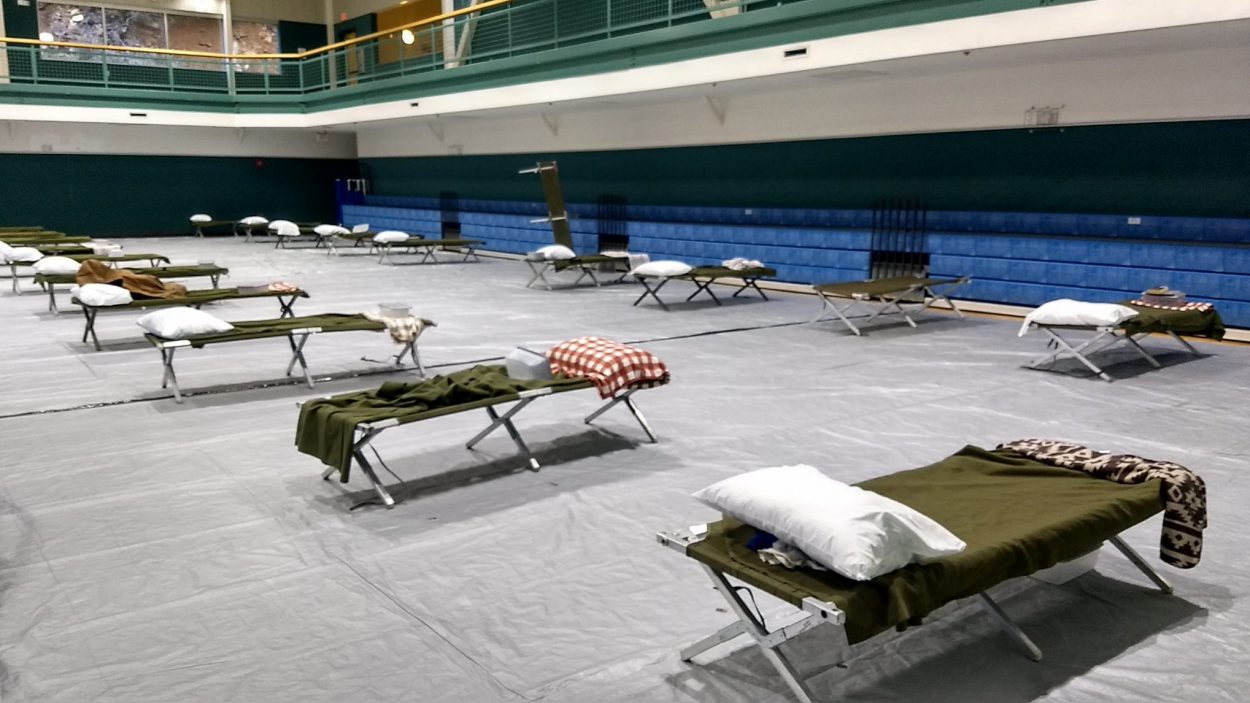 A temporary 24-hour homeless shelter that was set up at Ketchikan’s rec center is slated to close nearly two weeks ahead of schedule. The move is drawing criticism from homeless advocates.

Since early April, Ketchikan’s rec center has provided a temporary homeless shelter that allows space for social distancing. Some 30 cots are spread throughout the basketball court.

Initially, the plan was to keep the emergency shelter open until at least May 15, or until Ketchikan’s borough lifted its emergency declaration.

But Ketchikan’s emergency operations center announced Thursday that the shelter would close May 3 despite the ongoing emergency.

Borough Mayor Rodney Dial says he’d like the borough-owned Gateway Recreation Center to be ready to reopen as soon as possible.

“The rec center serves a vital purpose for our island,” Dial said in a phone interview Friday. “It provides positive benefits for physical health, mental health, summer camps for children and other programs that we’re hoping to transition into. And we do feel with the governor’s mandates that we’re going to be able to do some of those things in the future.”

Ketchikan emergency operations center staff echoed that sentiment in a question-and-answer session on social media Friday evening. After moving cots, floor coverings and other equipment out and cleaning the facility, officials hope to reopen the rec center by Memorial Day. For now, indoor gyms throughout Alaska remain closed in accordance with state health mandates.

Dial says local governments will continue to provide housing for Ketchikan’s homeless population during the pandemic through the joint emergency operations center.

“We will still continue to provide shelter, but we just no longer need the recreational facility for that,” he said.

He pointed to First City Homeless Services’ Overnight Warming Center as an alternative. The center, which generally runs throughout the winter, closed to the public earlier this month as staff moved to the rec center.

Though funding for the Overnight Warming Center generally runs out on April 15 each year — it’s a cold weather shelter — Dial says federal relief money could pay for it to reopen.

She says officials didn’t discuss the move with her organization before announcing the closure.

“I mean, we’re pretty concerned about what this is going to mean for our population — you know, the folks that have been using the shelter up there,” O’Dell said in a phone interview Friday.

She says the rec center generally serves between 30 and 50 people during the day. As many as 40 of those spend the night.

O’Dell says her organization’s downtown warming center can’t accommodate nearly as many people. She anticipates she would have to turn at least a dozen people away — something she says the warming center has never had to do before.

“Space is pretty limited,” she said. “Our hope is that we can get 15 in there and feel comfortable with the distancing that that allows.”

And that’s during the day. She estimates no more than 10 would be able to spend the night given the downtown shelter’s limited space.

And whether the warming center could reopen for overnight stays is still up in the air. O’Dell says officials already determined that the basement at 400 Main Street couldn’t safely accommodate a 24-hour shelter during a public health emergency. That’s why the rec center shelter opened in the first place, she says.

In a text message, O’Dell says it would be “irresponsible to consider placing staff or participants in an unsafe environment.” She says she doubts that the First City Homeless Services board would sign off on what she calls a “band-aid solution to the borough backing out of their agreement.”

“Now, if we, as we go through this process, find that it’s not working or that, let’s say, members of this population start getting an increase in COVID cases,” he said, “we can always reassess and go back.

He says officials could consider opening the Ted Ferry Civic Center or National Guard armory to replace the rec center.

But he says the rec center serves a valuable purpose to everyone in Ketchikan.

“We’re not looking to put anyone on the street, we’re just making the transition,” he said. “And by making this transition, what we can do is hopefully, also help with the physical and mental health of the citizens on the island — including the homeless population that will here in the future be able to use the rec center again.”

But O’Dell says it would be time-consuming and expensive to re-staff another temporary shelter once current employees are laid off. And an early April statement from Ketchikan’s emergency operations center points to issues with those and other possible shelter locations. The civic center would need to add showers to function as a shelter, for example.

Dial also suggested the Park Avenue Temporary Home may be able to absorb some residents currently in the temporary shelter at the rec center. PATH staff say they’re working with the emergency operations center on their plans for the future.