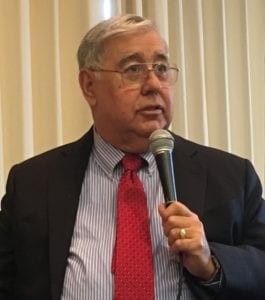 In a memo to the assembly, borough manager Ruben Duran and finance director Cynna Gubatayo paint a grim picture of anticipated revenues. Cruise ship tourism is a major economic driver for Ketchikan, and with the COVID-19 pandemic continuing to upend life around the world, the two officials write that “a calendar year 2020 cruise ship season seems unlikely.”

For that reason, officials assume sales taxes for the next fiscal year — which runs from this July through June of 2021 — will drop by 20 percent, about $1.2 million. And cruise ship head taxes, which are calculated on a calendar year basis, are zeroed out in the budget — another $2.4 million loss of revenue.

And though the borough was allotted more than $10 million in federal coronavirus relief, the Treasury Department says that relief money can’t be used to fill revenue gaps. As such, Duran and Gubatayo say they haven’t factored that into next year’s budget.

Given the uncertainty on the revenue side of the equation, Gubatayo and Duran recommend a number of measures to reduce expenses — postponing capital projects, maintaining a borough-wide hiring freeze, and nixing nearly all borough-sponsored travel, among others.

But Duran and Gubatayo aren’t recommending major service or program cuts at this point. Instead, they recommend a draw of nearly $2.4 million from the borough’s reserves to cover the shortfall.

But the two borough officials say they expect to review the budget again in the fall once the economic impacts of the pandemic become clearer.

The borough assembly will discuss the budget at Monday’s assembly meeting.

In other business, the assembly will hear a presentation from borough staff regarding the Gateway Recreation Center’s use as a temporary homeless shelter. Ketchikan’s joint emergency operations center announced earlier this month that the emergency shelter would close nearly two weeks ahead of schedule as the state slowly reopens.

Ketchikan’s borough assembly meets at 5:30 p.m. Monday by teleconference. It’ll be broadcast on local cable channels and streamed on the borough’s website and via WebEx — meeting number 290 595 259, password: #SocialDistance6.

To offer live testimony, residents can call the borough clerk’s office at 228-6616 prior to 4 p.m. Monday. Comments can also be emailed to boroclerk@kgbak.us.