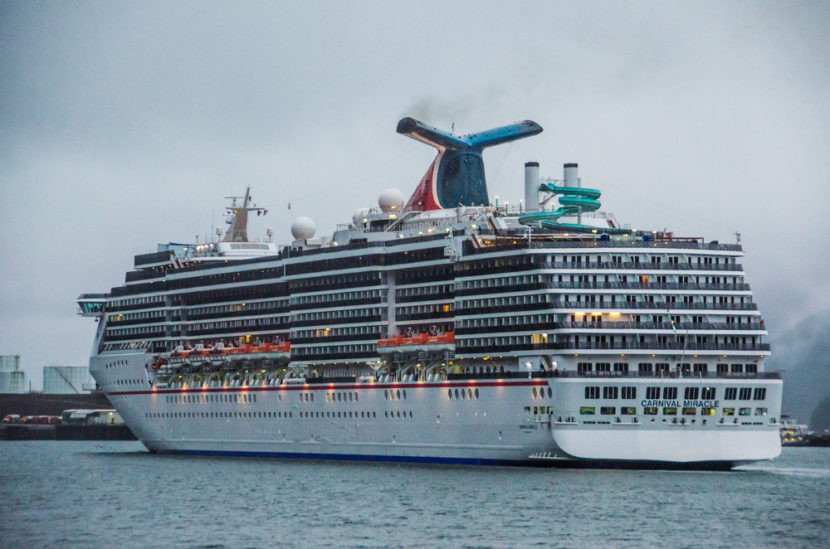 The Carnival Miracle arriving in Juneau in 2013. (Photo by Heather Bryant/KTOO)

Carnival Cruise Line said Monday that it had cancelled sailings to Alaska for its brand of ships. The announcement does not include its sister brands, including Holland America and Princess Cruises.

The 2,124-passenger Carnival Spirit was scheduled to make 22 trips to Alaska this summer.

Half of the sailings were canceled last month. Monday’s announcement nixes the remaining 11.

The news comes as the Miami-based cruise line announced sailings from ports in Florida and Texas would resume August 1.

Carnival spokesman Vance Gulliksen says the Spirit was the only ship the line planned to regularly sail to Alaska this year. The Carnival Miracle was scheduled to make one trip to Alaska this summer, but that sailing was canceled last month.

It’s unclear whether Holland America- or Princess-branded ships will visit Alaska this season. Each of those lines has 24 Alaska port calls scheduled for 2020 starting in early July.

Cruise Lines International Association Alaska’s Mike Tibbles says in an email that 419 summer 2020 sailings have been canceled so far. That’s 70 percent of this summer’s scheduled cruises — a loss of 825,200 passengers for the state.

A Centers for Disease Control “no-sail” order remains in effect through late July, though federal officials could rescind it sooner or extend it further.

Canada’s ports are closed to ships with more than 250 people through at least July 1. Federal law requires foreign-flagged ships to make at least one international stop if cruising between U.S. ports.