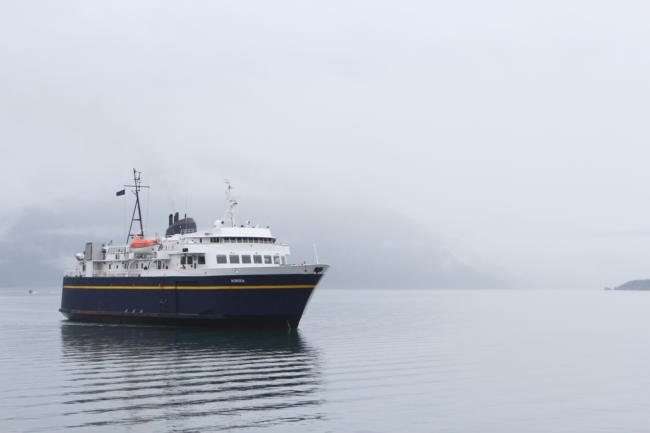 The Aurora, a 235-foot Alaska state ferry, approaches the dock in Whittier in September 2019. It’s been laid up since last fall. State lawmakers have appropriated $4 million for steel work to be completed this year.  (Photo by Nat Herz/Alaska’s Energy Desk)

Gov. Mike Dunleavy’s administration has filed a four-year request for federal support for the state’s transportation needs. But critics say it prioritizes highways and bridges over fixing the state’s aging ferry fleet.

The governor held a press conference earlier this year focused solely on Alaska’s ferry system. The fleet’s last operating mainliner had just broken down causing what would be a nearly six-week shutdown of regional service.

“We are doing everything we can to work on fixing this issue — and like I said — coming together to come up with a sustainable solution that’s gonna go forward for many years,” he told reporters on Feb. 19.

Asked about using federal highway dollars available for maintenance and repairs, the governor deferred to Transportation Commissioner John MacKinnon, who pointed to the agency’s Statewide Transportation Improvement Program, or STIP.

“Look at the STIP and that will show you where we’re putting federal funds into ports and ship repairs,” MacKinnon said.

It’s a four-year plan to leverage nearly $500 million in federal funding to pay for state transportation needs; a wish list of sorts that the state draws up to spend federal money. And under the program, the federal government pays about 90% of each project whether it’s a road, bridge or ferry boat.

As part of the deal, the state gets a pot of federal money that has to be spent on ferries. It works out to about $16.8 million a year for the entire fleet. But the state can also spend other federal funds on the ships too.

Only according to the STIP approved on April 28 — it doesn’t plan to. Critics say that’s a red flag.

“By not asking for enough money to maintain the fleet, it’s an indicator of what their intentions are,” David Kensinger, a Petersburg businessman and member of the steering committee of the Alaska Marine Highway Reform Project.

He told CoastAlaska that the state’s use of federal dollars doesn’t prioritize the aging vessels.

“When you have a fleet where the majority of the vessels are between 45 and 58 years old, if you want to keep them running, you have to have an active maintenance program,” Kensinger said. “You actually have to spend real money on them.”

To be clear, this isn’t a huge change from the way federal funds were spent on the marine highway in previous years.

Data provided by state transportation planners show the ferry system has received — on average — about $21.2 million annually in total federal funding between 2010-19.

But the latest STIP projects the state putting less than that into ferry repair for the next four years at a time when breakdowns and mishaps are becoming more common.

DOT’s Program Development Director Ben White says the drop is due to other critical highway projects across the state.

“We have more needs in the state for infrastructure than we have available federal funding so we’re having to stretch the federal dollar further and further,” he told CoastAlaska. “But there isn’t a policy that’s roads first.”

He says the STIP is often amended — meaning the state can redirect federal funds to specific needs.  His agency is working on an amendment now, he said, but details won’t be out until summer.

Some of the long-range planning decision hinge on the recommendations of the governor’s Alaska Marine Highway Reshaping Work Group, state officials say, which is meeting through the end of summer to advise the administration on the future of the fleet.

“And so that’s part of the other issue that we’ve tried to program a STIP for the next four years worth of funding and we’re also waiting for the reshaping working group to come out with with their initial findings and their priorities,” White added.

Transportation Commissioner John MacKinnon has cited another key reason why more federal dollars aren’t being leveraged for ferries. It has strings attached: federally funded projects have to be put out to a nationwide competitive bid.

“Annual overhauls are done at the Ketchikan shipyard, they’re done with state funds,” he told reporters in February. “If they were to be done with federal funds, we’d have to write up a much bigger design and contract put it out to bid and the work very possibly would go to Seattle or Portland — so probably not in our best interests.”

“But when you have a ship that needs massive amounts of work, there comes a time when you need to take a look at the fiscal efficiency and using the federal highway funds,” Sen. Jesse Kiehl (D-Juneau) said in an interview. “And sometimes that means opening up that competitive bid without an Alaska bidders preference.” 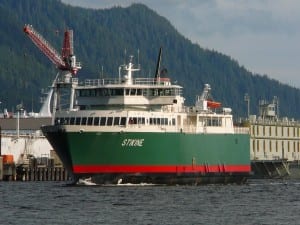 And there’s another wrinkle: Alaska has two public ferry systems: the marine highway and the Inter-Island Ferry (IFA) that runs between Ketchikan and Prince of Wales Island.

This year, the IFA was left out of the four-year STIP. That’s led to warnings it’ll need a commitment of about $6.2 million to keep its two ships running.

“It makes me a little uneasy that we’re not in the STIP, of course,” IFA chief Ronald Curtis said.

But he says he’s received assurance that the IFA will get the money it needs.

It may be from the pot of ferry boat money. And that could mean even less for repairs and upkeep for the Alaska Marine Highway System’s fleet.

Or it might not. It all depends on how the agency amends its transportation plan later this summer.