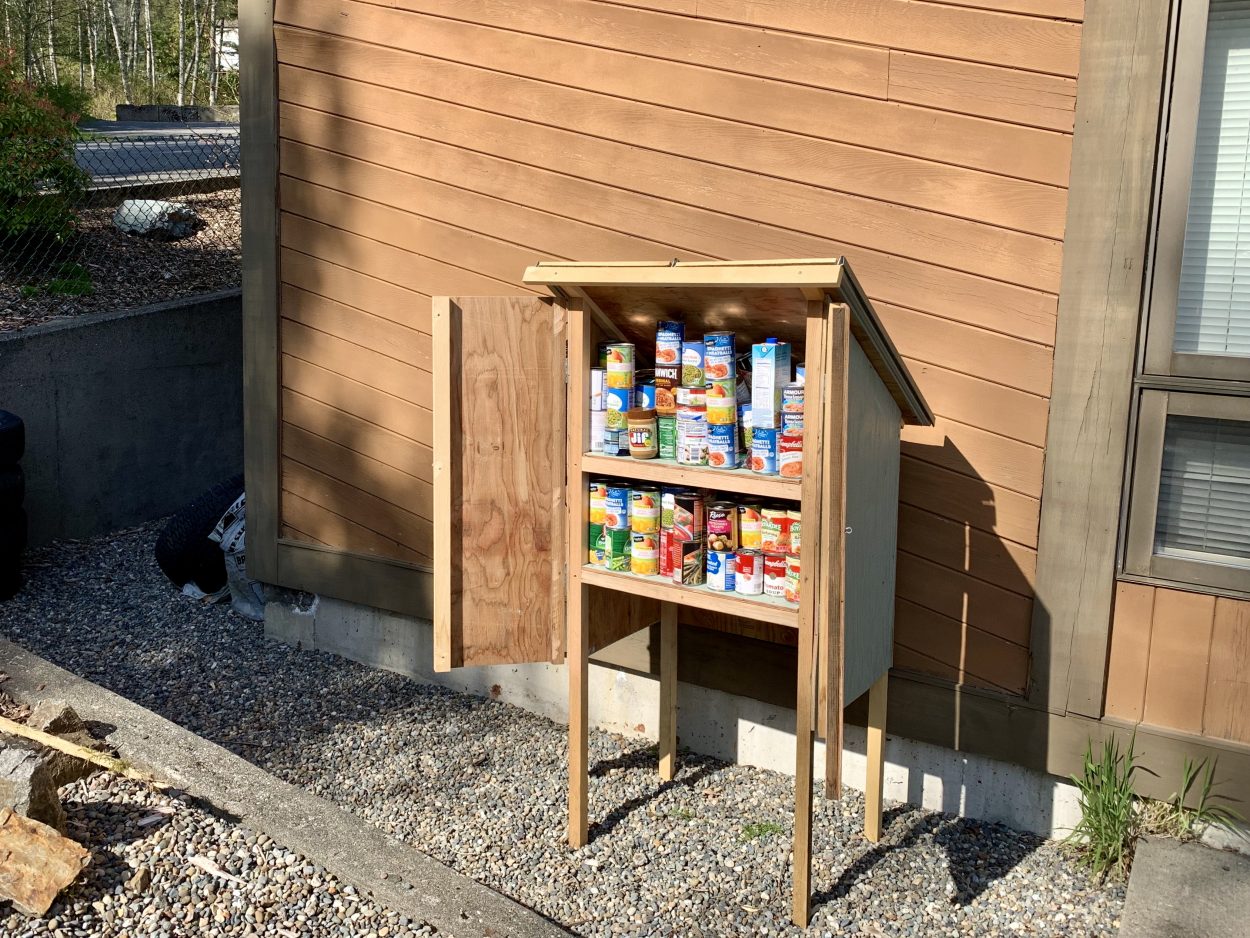 Those in need of nonperishable food can find the Little Free Pantry behind Holy Name Catholic Church in Ketchikan. (Eric Stone/KRBD)

A Ketchikan woman’s cross-country cycling trip inspired her to find a novel way to get food to the community’s needy. The novel distribution method requires limited contact — making it perfect in a pandemic.

Back in 1999, pediatrician Elisa Rosier rode her bike from Seattle to Washington, D.C. As she pedaled from coast to coast, crossing Washington State and making her way into Montana, she came across a box full of free food.

“It was just a spot in town that everyone knew that this exchange could be done,” Rosier said in a phone interview.

She said she noticed more as she made her way through Wyoming and South Dakota, and it got her thinking.

“Going across the country, I just thought that was a really cool idea,” she said.

Rosier kicked the idea around for a while, but 20 years later, the idea has some new urgency.

“Recently with the pandemic, I was just thinking about being able to exchange food in a non-contact way,” she said.

So Rosier thought back to the boxes she’d seen on her trip. She found a national organization — the Little Free Pantry movement — that shows more than 1,000 boxes full of free food all over the country. It’s based on the similar Little Free Library program, in which people host boxes full of reading material for anyone to borrow.

But there weren’t any shown in Alaska. So Rosier decided to get Ketchikan on the map.

“So I reached out to Holy Name [Catholic Church], where I’m a parishioner, and asked them if they would be interested in housing a Little Free Pantry there,” she said. She said the church agreed.

One problem: Rosier is a doctor, not a carpenter. But the church’s secretary put her in touch with parishioner Larry Jackson.

“So I said, yeah, that’d be great,” Jackson recounted in a phone interview. “It’d be a great project for me and the kids to do together.”

Jackson said he took some spare wood, made a few cuts and drilled a few holes. He said he was able to teach his kids a little about carpentry — and a little about life.

“It’s kind of trying to teach them that there’s a social giving back component to life,” Jackson said.

Rosier said she initially stocked the box with some surplus food stocks at the church. She’s planning to check on it weekly. She encourages anyone with a few extra nonperishables — or anyone in need — to stop by the pantry.

Ketchikan’s Little Free Pantry is located outside Holy Name Catholic Church. Coming from Jackson Street, it’s on the back side of the building.