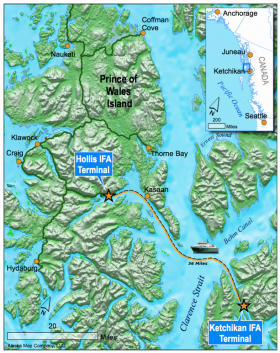 Prince of Wales Island’s ferry link with Ketchikan has been severed after the only serviceable ship in the Inter-Island Ferry Authority’s fleet broke down last Friday.

A statement Monday describes a “catastrophic propulsion system failure” on the port side of the M/V Prince of Wales.

“We realize that this is a major inconvenience to our customers and supply chain partners,” IFA’s General Manager Ronald Curtis wrote in a statement. “We are working diligently on trying to identify solutions for our customers in this difficult time.”

Repairs to its sister ship M/V Stikine have been delayed “due to the inability of technicians to travel from the Lower 48,” Curtis said. “We are working to get technicians scheduled and M/V Stikine back into service.”

In the meantime, both ferries are unable to make the 72-mile round trip journey between Ketchikan and Hollis.

The IFA carries passengers, vehicles and freight and is key to supplying Southeast Alaska communities on Prince of Wales Island.

The M/V Stikine is projected to be back in service on June 11 and will sail five-days-a-week, Curtis said. Her sister ship Prince of Wales will be repaired once parts and technicians are available, he added.