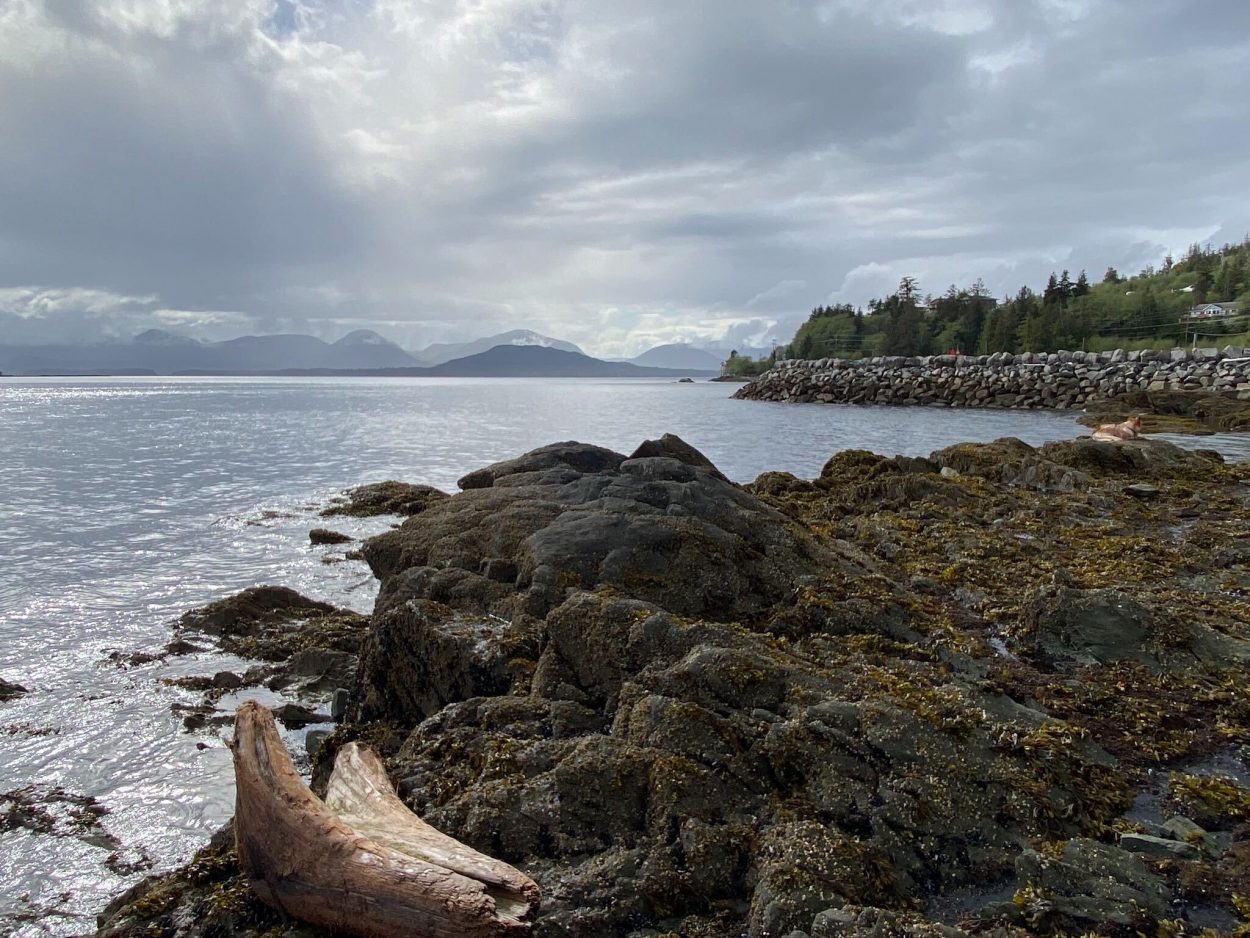 Two sites near Mountain Point, shown here on a gray May day, are among those monitored for elevated levels of fecal coliform and enterococci bacteria. (Eric Stone/Alaska’s Energy Desk)

A state and federal program that monitors bacteria levels at Ketchikan-area beaches is back for another year. And researchers with the EPA-funded BEACH program say they have an unique opportunity this summer.

It’s an exciting time to be a water scientist in Southeast Alaska. For the past three summers, researchers have measured bacteria levels at Ketchikan-area beaches in an effort to prevent waterborne illness. And this summer, just as in years past, technicians will wade into the water looking for fecal bacteria.

But this year, they’ll have a chance to see what levels look like without cruise ships.

“So, for the marine water quality monitoring piece of the project, and other projects throughout the state the data collection without the cruise ships present will be a unique opportunity for the spring and summer,” she said in a phone interview earlier this month.

Data from this summer could help researchers determine what — if any — effect cruise ships have on bacteria levels.

The BEACH program looks for two main types of bacteria: enterococci and fecal coliform. Those particular microbes don’t necessarily cause illness themselves, but they serve as indicators. If levels are too high, that means possible fecal contamination.

“Along the Ketchikan coastline, there are several potential sources,” Augat said. “Those include boats and harbors and launch areas, small cruise ships, private watercraft and ferries, individual septic tanks.”

She was quick to point out that this summer won’t be a perfect comparison to years with cruise ships — factors like ambient temperature and rainfall can greatly influence bacteria levels. Warm weather allows bacteria to multiply faster, and heavy rain can wash bacteria trapped on the ground downhill towards the sea. And no two years have the same weather.

But Augat said a lack of cruise ships isn’t the only exciting thing about the BEACH program this year. Augat says technicians with Ketchikan’s federally-recognized tribe will record some new data this year: they’ll be looking at turbidity — essentially, how cloudy the water is — along with wave height and direction. But what for?

“That’s to develop a beach model that we’re hoping to use in the 2021 recreational season. It’s an EPA model,” she said. “It’s called Virtual Beach.”

It’s predictive model — a complicated series of statistical calculations that allow researchers to estimate bacteria levels without measuring them directly.

“So we will do less sampling, not weekly sampling, as the years go on,” she said, “and be able to use this predictive model to help us let you know if there’s an advisory at any of the beaches.”

For this summer and the next, though, technicians will continue to wade into the water at 13 sites up and down the coast of Ketchikan every week.

More information about the BEACH program, including maps showing bacteria levels at Ketchikan- and Kenai-area beaches, can be found at the Department of Environmental Conservation’s website.