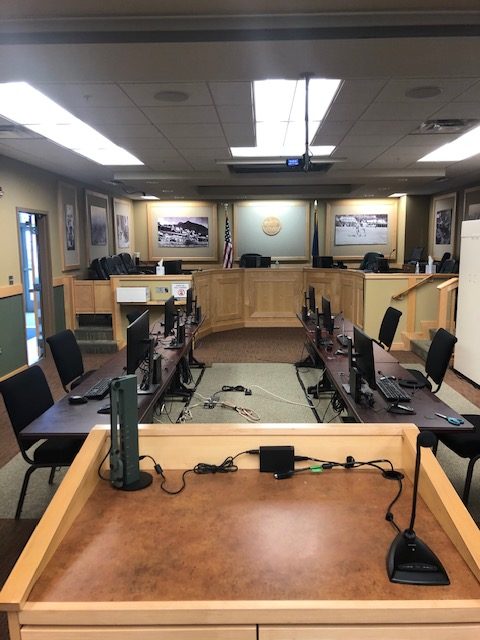 Ketchikan’s Borough Assembly will meet in person Monday, June 1 — with a modified setup in the assembly chambers. (Courtesy of Ketchikan Gateway Borough)

Ketchikan’s borough assembly will return to in-person meetings on Monday. It’ll be time the body has physically met since March 17, when Ketchikan had its first confirmed coronavirus case.

But things will look a little different at the White Cliff Building.

The Borough Assembly’s usual dais will be extended on either side to ensure adequate spacing between assembly members, she said.

“So it’ll just look like an elongated horseshoe, if you will,” she said. “Then at the end of that horseshoe, or the elongated dais, will be the podium”

That’s where residents will offer testimony. Paxton says there’s room for a dozen members of the public to sit in the actual assembly chambers. There will also be overflow seating and a monitor in the hallway outside the chambers. 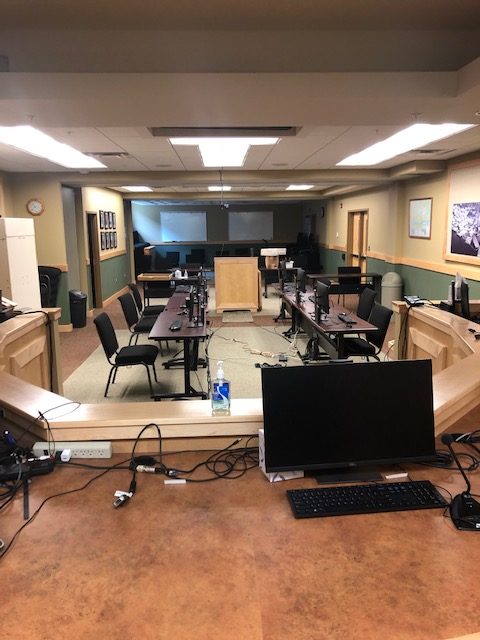 The view from behind the dais. (Courtesy of Ketchikan Gateway Borough)

Monday’s agenda is relatively light — the assembly will first consider roughly $360,000 in repairs to Ketchikan High School’s heating system. School officials warn that two of the building’s three boilers have failed, and if the third fails before one is replaced, it could mean serious damage to the high school.

Also up for debate Monday is a measure that would allow the school district to roll over unspent money from this school year into next. District staff say that’s necessary to allow the district to utilize federal coronavirus relief funds during the 2020-2021 school year.

In other business, the assembly is scheduled to take up a $280,000 grant request from the Ketchikan Visitors Bureau. That tourism marketing and support organization gets much of its revenue from city and borough grants. This year’s request is up from last year’s by more than $15,000.

In the Visitors Bureau’s grant application, chief Patti Mackey says the organization needs the extra cash to make up for shortfalls and market Ketchikan as a destination for tourists around the world.“If we don’t have the funds in FY21 to help restart our visitor industry, we will further delay economic recovery,” Mackey wrote in the grant application.

Finally, the assembly will discuss moving up an annual local sales tax holiday to July 11, about a week and a half after this year’s Permanent Fund Dividend will be distributed. But a final decision on that isn’t expected Monday — the Assembly will need to suspend a rule requiring the tax holiday to fall between October and April. They’ll take up the measure again at a special meeting scheduled for June 8.

The Borough Assembly meets at 5:30 p.m. Monday in Ketchikan’s White Cliff building. In keeping with state guidance, masks are recommended, though not required. The meeting will be streamed at the borough’s website and broadcast on local cable channels. Residents who’d like to offer comments remotely can email the clerks’ office at boroclerk@kgbak.us prior to the meeting. Questions about the new in-person meeting setup can be directed to the clerks’ office at 228-6616.