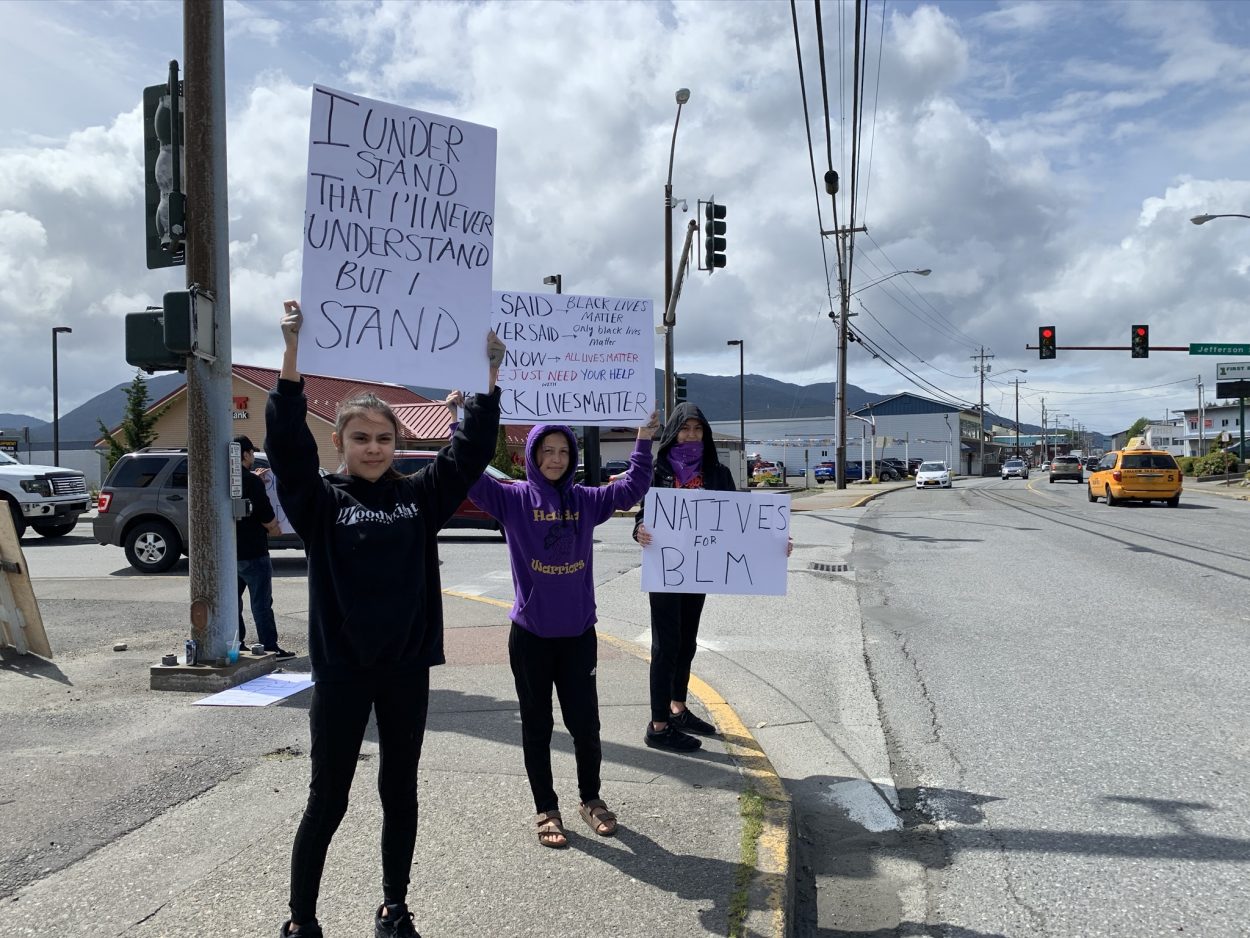 From left to right, Audrey Daniels, Isabel Morris and Rosie Daniels were among a handful of protesters demonstrating at the corner of Tongass Avenue and Jefferson Street Wednesday. (Eric Stone/KRBD)

Protesters returned to a busy Ketchikan intersection Wednesday, holding signs that read “Black Lives Matter” to protest racism and police brutality. Not everyone was receptive to the vigil by Alaska Native youth.

About a half-dozen people gathered Wednesday at the intersection of Tongass Avenue and Jefferson Street in Ketchikan. It was a sunny day at one of the area’s busiest intersections.

Teenager Rosie Daniels says quite a few motorists were honking in support of their message.

“But most of the time, they shake their heads and put a thumbs-down or flip us off and all that stuff. And cops wave — sometimes they wave, but sometimes they don’t even look at us,” she said.

She says local pushback against the protest is disheartening considering Ketchikan’s Alaska Native community, which she’s a part of.

“It just makes me feel uncomfortable to live in this town, because this is a Native town and we have racist people like that here and it just doesn’t make sense,” Daniels said.

Wednesday’s protest, like similar demonstrations across the country, is in part a response to the death of George Floyd, a black man who died at the hands of Minneapolis police officers.

Video of the death, shot by bystanders, has sparked protests across the nation — and world — with clashes between demonstrators and riot police in cities continuing.

“Stand up for what you believe in,” she said.

She and her friends recounted a close call the day before.

“We were holding up signs and this dude came up, and I got off the sidewalk for two seconds and he swerved and then tried to hit me,” Morris recalled.

Reports of the incident surfaced on social media. Ketchikan Police Sergeant Mike Purcell told KRBD authorities are looking into it.

“I was able to contact somebody that may have been involved in it, and at this point, we have an active investigation happening,” Purcell said.

Back on Tongass Avenue, Morris says the group plans to continue to gather. A larger demonstration is planned for 5 p.m. Saturday.