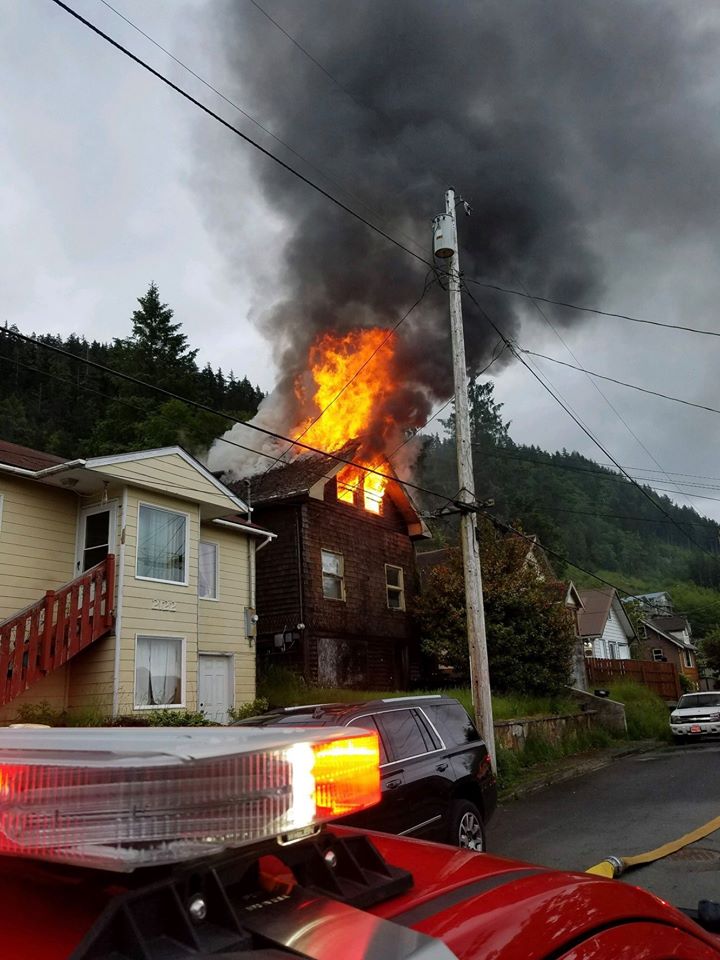 A home on First Avenue is consumed by flames Sunday morning (Photo courtesy of the Ketchikan Fire Department).

The occupants of a house on First Avenue escaped unharmed from a Sunday morning electrical fire thanks to a vigilant house cat.

Ketchikan Fire Marshall Andrea Buchanan says the family was alerted by the feline that apparently knew something was wrong in the house.

“A cat in the structure was restless and getting their attention at which time, in responding to the animal, a fire was discovered on the 2nd floor.”

She says firefighters took the call at about 6:45 a.m.

“Upon arrival, suppression units were presented with a large amount of fire from the second floor of the structure. Immediate suppression efforts took place with knock-down of the fire in approximately 45 minutes.”

Though all four residents and the cat made it out safely, the house was a total loss. Buchanan says there were no injuries, but one resident was transported to the hospital for a non-related medical issue.

Power was shut down in the area due to the fire’s proximity to power lines.  Buchanan says the cause of the fire was an electrical issue in a vacant second story bedroom.  She says it’s important to be mindful of making sure electrical wiring is up to code.

“Whether you’re in a newer home or an older home (it’s important) that we don’t overload our circuits, that we check for frayed or damaged wiring. And if it doesn’t need to be plugged in, we unplug it.”

This story has been updated to indicate the cat survived.