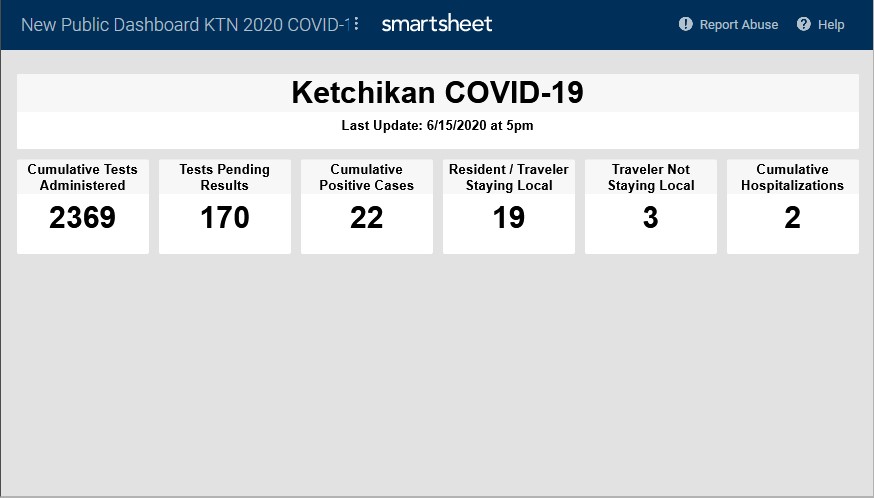 Local Ketchikan authorities uveiled a newly-redesigned COVID-19 dashboard Monday. The new table distinguishes between those remaining in town and those continuing onwards. (Screenshot by Eric Stone/KRBD)

Three recent Ketchikan COVID-19 cases are believed to be on Prince of Wales Island. But state and local officials are at odds as to where the people currently are.

On Saturday, the state health department reported two new cases in the Prince of Wales Island community of Craig. That’s despite a statement from a day before from authorities in Craig saying unequivocally that the cases were not in the city.

Not so, says Ketchikan’s emergency operations center spokesperson, Kacie Paxton. That assessment doesn’t square with the information local officials have. Ketchikan’s emergency operations center still believes those cases to be at an unspecified location on Prince of Wales Island. In an effort to protect patient privacy, authorities generally don’t release place names for communities of fewer than 1,000 people.

So why the confusion? It may have something to do with visitors bound for Prince of Wales Island being screened at Ketchikan’s airport.

The discrepancy could also be due to a difference in the way the entities track cases. A spokesperson for the state Department of Health and Social Services hasn’t responded to questions seeking to clarify its data.

According to Ketchikan’s emergency operations center, a total of 22 people have tested positive for COVID-19 in Ketchikan. 19 of those have remained in Ketchikan and three have continued onward.