‘An emotional roller coaster’: How Ketchikan’s oldest bar is weathering the pandemic 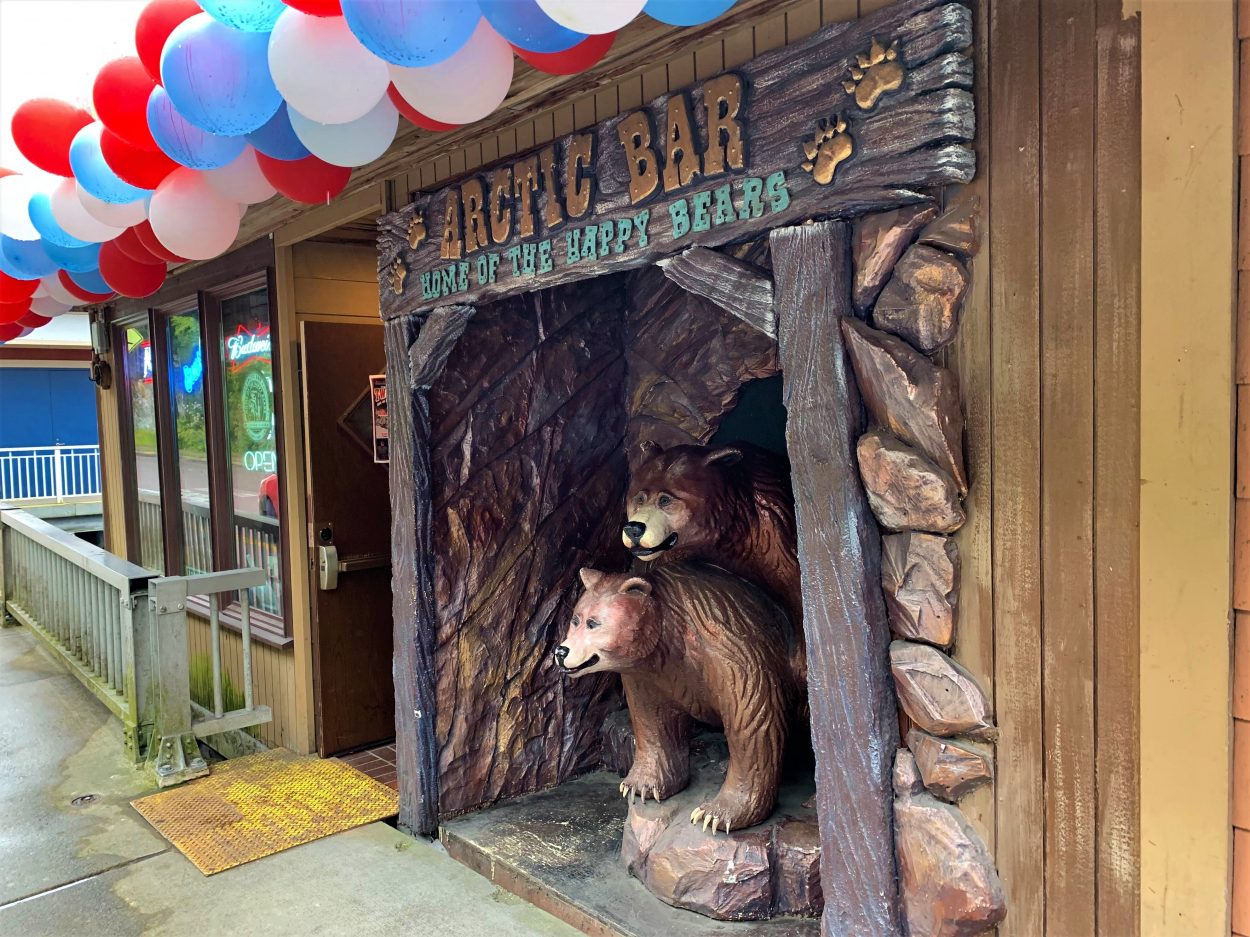 As coronavirus infections climb in the state, bars are again facing scrutiny. The state’s top doctor says bars have been linked to several outbreaks of COVID-19. Dr. Anne Zink said Tuesday that going to bars is a “high-risk activity”.

It’s another blow to an industry hit especially hard by the pandemic — a seven-week shutdown and the crumbling cruise season already have some Southeast Alaska bar owners struggling to make ends meet.

The owners of one Ketchikan’s oldest taverns say they’re struggling to stay open for themselves and the patrons that have become an extended family of sorts.

The Arctic Bar is Ketchikan’s oldest business of its kind. In the 83 years since it swung open its doors, the Home of the Happy Bears, as it calls itself, has seen decades of booms and busts.

For nearly half that time, Paula Weisel has been tending bar. She’s still working behind the counter, but her title is a little grander these days — co-owner.

And to her, the Arctic is more than a business — it’s part of Ketchikan’s community.

“I didn’t buy the bar just for it to be a bar, Kara didn’t come on board for it just to be a bar. We wanted it to be more than that, to give back, a safe haven, almost,” Weisel said.

Kara is Kara Jones. She bought a share of the bar about five years ago.

She says enduring a nearly two-month pandemic-induced shutdown was tough. Shortly after the governor shuttered nonessential businesses across the state, an Alaska hospitality industry group estimated that 14% of bars across the state have closed for good.

“You wake up every day just wondering — are we ever going to reopen? Are going to lose everything. Lots of lots of questions,” she said. “And because we’re in quarantine, we have all the time in the world to think — and sometimes having too much time to think is not good.”

Jones and Weisel talk a lot about family. The bar’s family. They say they see patrons as family, their staff as family.

And that idea of family extends to the wider Ketchikan community — when a nine-year-old girl with a long list of ailments needed a service dog, the Arctic hosted a fundraiser. Some even host memorial services there.

But like many Southeast Alaska businesses, the Arctic relies on summer cruise tourists to make ends meet. Jones says the winter is always a lean time of year.

“Essentially, it costs us money to stay open in the winter. We would financially be better off to shut down. But we would never do that,” she said.

“I mean, by the end of February,” Jones said, “it’s time for a change because everybody’s at each other’s throats and —”

“The locals are cranky,” Weisel said. “To put it in a good way, the locals are a little crankier than normal.”

“And the seasonals and the cruise ships do help, you know, break that up and people are busy again, they’re making money again,” Jones said.

But that’s not happening this year.

Some 1.2 million cruise tourists were supposed to visit Ketchikan this year. But the pandemic led cruise lines to suspend sailings as ports in Washington state and Canada closed. Now, only a few big-ship trips remain on the schedule. Jones says it’s a double whammy.

“As owners, I would say we’ve been on an emotional roller coaster. We were so grateful to be open because you go back to what you feel is normal, and then you get here and you realize it’s not normal — because this isn’t our normal,” Jones said.

At the same time, though, the owners say the Ketchikan community has stepped up to support the Arctic. Tips have been better.

“They rang our bell. Our bell has been rung more times than I’ve seen it in 35 years. I mean, the bell has been ringing, thank God,” Weisel said. “When somebody rings the bell, it’s a round for the house. And they’re doing it on purpose, they know what that bell’s for.”

But Jones says she’s worried about what the future holds — especially when federal unemployment benefits run out later this month.

“This winter is gonna be hard on a lot of people, not just financially, but emotionally,” she said. “I mean, there’s a lot of jobs that are flat-out not here.”

They say they’re doing their best to keep up with the latest advice from state health officials — keeping tables six feet apart, for example. But Jones said there’s only so much they can do.

“That’s why I stress what the governor said about putting this back on the people. And I don’t feel like anybody should be shaming anybody else for their choice,” Jones said.

For now, though, the Arctic’s owners say they’ll do everything they can to make it through to next year to — hopefully — see Ketchikan’s tourist economy recover.