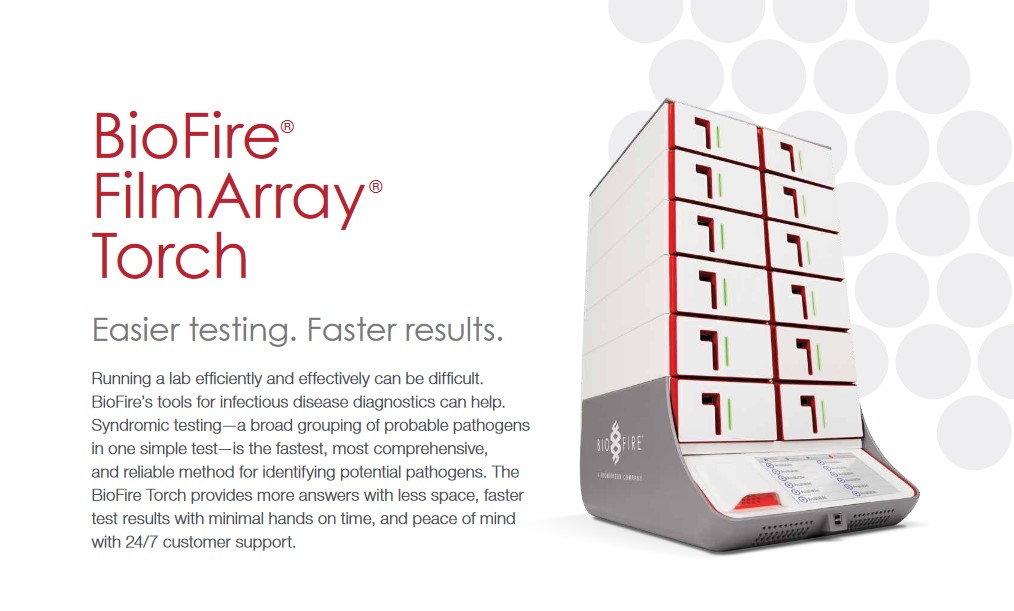 This screengrab from a promotional graphic shows the BioFire FilmArray Torch. The Ketchikan Gateway Borough moved to purchase the COVID-19 testing platform in an effort to shorten test turnaround times. The city of Ketchikan will decide whether to move forward with the purchase. (Screenshot by Eric Stone/KRBD)

Getting COVID-19 test results in Ketchikan could get a whole lot faster. The Ketchikan Gateway Borough took the first steps towards acquiring a large-scale rapid testing machine for the community.

Right now, most testing in Ketchikan requires a swab to be sent to labs in the Lower 48.

Ketchikan emergency manager Abner Hoage told the Borough Assembly on Monday that it currently can take as long as a week to get those results.

But he says the BioFire FilmArray Torch is designed to handle around 350 tests daily — three and a half times the average daily demand in Ketchikan.

“It just gives us the ability to get those tests quicker, to help those businesses to get our community back to work to ensure that we don’t have spread because we can test early, get results quickly,” Hoage said. “And if you only have a day to go around and spread this as opposed to four or five or six days were much better position than we are otherwise.”

The machine, including a two-year warranty, costs $291,900. The assembly voted 5-1 to authorize spending the money. But there are a few things that need to happen before the machine is actually ordered and delivered. First of all, the City of Ketchikan would need to agree to the purchase.

There is some weight behind the borough’s request, though — the borough has offered to pay the cost of the testing machine itself. That’ll likely be paid with federal aid. But it’s not clear whether the borough would have to spend a portion of its $10.4 million in CARES Act funding to purchase the machine. About half of that $10 million has already been allocated for economic relief programs.

But Hoage explained that the testing machine isn’t the most expensive part of the equation. At current demand levels, Hoage estimated a six-month supply of test kits would cost approximately $2.5 million. That’s about half a million more than it would cost to continue to send tests down south at the same rate. But borough officials say the Federal Emergency Management Agency would reimburse the community for the cost of the test kits.

Speaking to the assembly, borough mayor Rodney Dial framed the cost as an investment in Ketchikan’s recovery.

“If this generates economic activity in our community, that will pay tax revenue, and will hopefully lessen the decisions that you have to make in the future on how you’re going to address these budget deficits,” Dial said.

Business owners have testified in recent months that rapid testing would allow some tourists to visit Ketchikan — and of course, spend money. And it’s not a new idea in Ketchikan — a private company once offered to purchase a testing machine on the community’s behalf.

But here’s the thing: there are already at least three separate, incompatible types of testing machines in Ketchikan — platforms made by Abbott Labs, Cepheid and Qiagen. Assembly Member Alan Bailey asked Hoage why a new testing machine, with its own proprietary cartridges, was necessary now.

Hoage replied that getting the testing materials for machines already in town has proven difficult.

BioFire, on the other hand, reportedly told Ketchikan officials that they would supply as much as the town needs.

“But they have told us that they will commit to supplying us up to the 351 per day that the machine can process — enough to be able to maximize the use of the machine,” Hoage said.

There are three labs in Ketchikan that could run the machine, Hoage said.

It’s not clear whether the City Council would need to approve the purchase. Hoage told the assembly that company sales reps had assured him the COVID-19 testing machine could be delivered four to eight weeks after it’s ordered.

Correction: An earlier version of this story incorrectly said the Borough Assembly authorized the purchase by a 6-1 vote. The vote was 5-1 with Assembly Member A.J. Pierce absent.