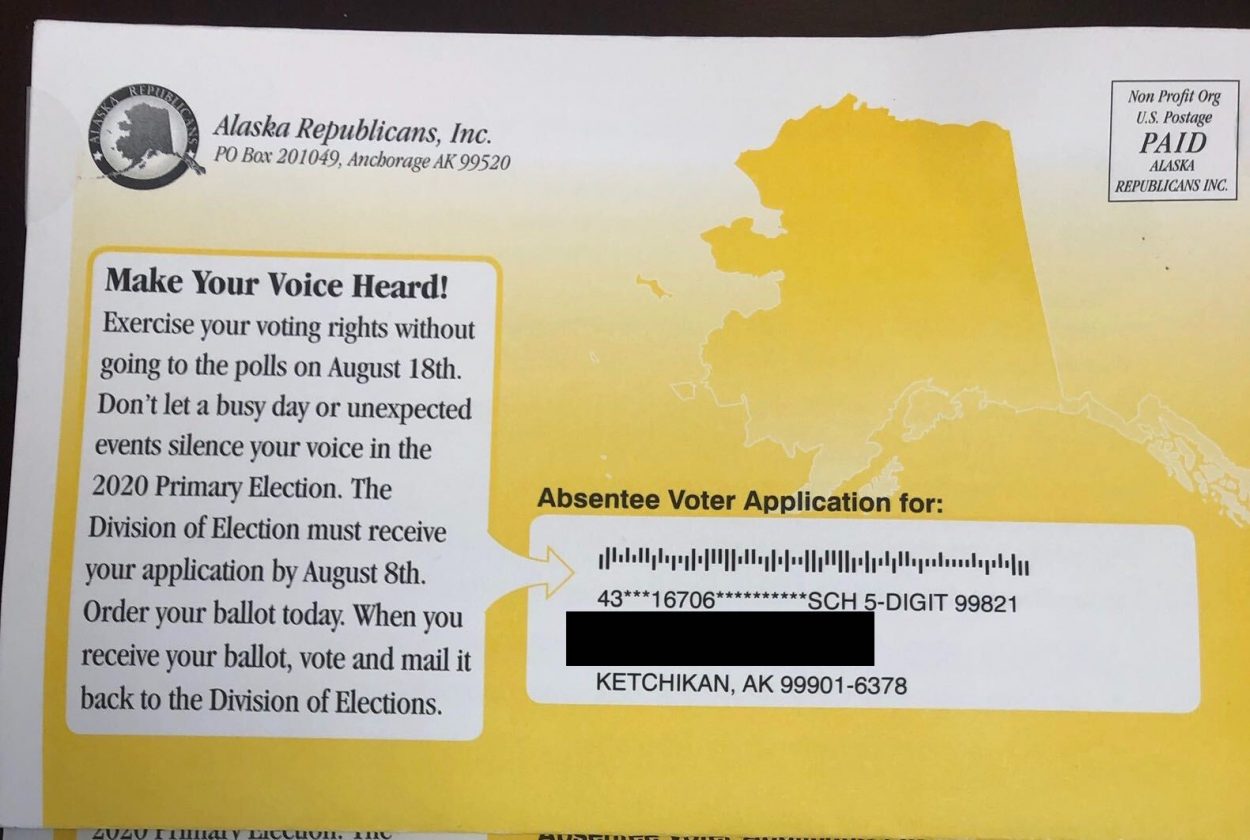 Ketchikan attorney Stephen Bradford provided this photo of a mailer sent to his office this week. The name on the envelope, redacted here, was not Bradford’s. (Photo: Stephen Bradford)

Election season is ramping up in advance of the August 18 state primaries, and that means yard signs, TV ads and mailings advocating for candidates are showing up all over the state. But one campaign mailer has left some residents with concerns about mail-in voting.

Ketchikan attorney Stephen Bradford got three of the strange mailers.

“I received mailings from the Alaska Republican Party that were to the correct address, but were made out to names with which I was unfamiliar,” he told KRBD.

Bradford says they were labeled as absentee voter applications.

“I did a quick Google search on those names, because I did not recognize them, and I don’t believe them to have any connection at all to Ketchikan,” he said. “And I thought that was pretty unusual.”

One of the people to whom the absentee applications was addressed to seems to live in Anchorage. Another appears to be a Sitkan.

And it’s not just happening in Ketchikan — the Fairbanks Daily News-Miner reported that a Fairbanks resident got an application intended for someone who lives in the Mat-Su Borough, 315 miles away.

So why are people all over the state getting mislabeled absentee ballot applications?

“The printer that was hired by our consultants had a malfunction in his computer equipment, and it misaligned the names and the addresses when he was printing and did not get caught before they got mailed out,” Clary said in a phone interview.

But Clary says the party accidentally mailed roughly 3,500 of those to the wrong addresses.

“But that’s being corrected and new ones are being mailed out with the correct names and addresses on them,” he said, adding, “There’s no chance of fraud on these other ones.”

State officials back that up: you need a lot more than just a name to apply for an absentee ballot by mail. Here’s the director of the state Division of Elections, Gail Fenumiai.

But Bradford, the attorney, says he’s not necessarily concerned this particular mailing could lead to fraud.

“My bigger concern is that it simply adds to the concern that a lot of people, myself included, have about going to a primarily mail-in election system,” Bradford said.

But Fenumiai says that concern is misplaced. The Division of Elections maintains the voter database that the Alaska Republican Party accessed to send its mailers. But the error that switched up the names and addresses happened on the party’s end, not the state’s.

“This was nothing that the Division of Elections did. We were not involved with this mailing,” she said. “And if they have concerns about it, they could contact the Republican Party directly.”

“Voters should rest assured that everything that we’re doing here is on the up and up and should not be concerned about fraud on our end at all,” the elections director said.

Fenumiai says residents can still use the mislabeled applications — just cross out the incorrect name — or apply for an absentee ballot online at AbsenteeBallotApplication.Alaska.gov.