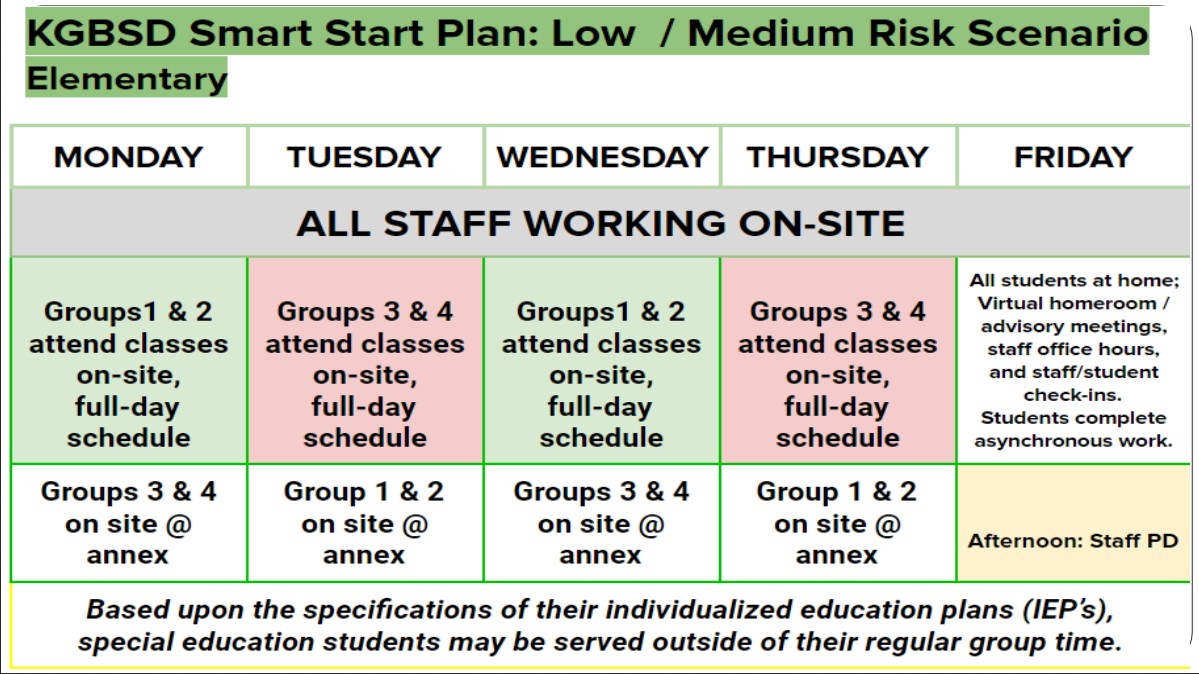 This slide from a presentation sent to Ketchikan school district parents Friday outlines the district’s new plan for elementary-schoolers. Children would attend “annexes” when they’re not scheduled to be in classrooms. It’s not clear yet where those might be located. (Screenshot by Eric Stone/KRBD)

Ketchikan’s school children may have somewhere to go four days a week once classes resume in the fall. The school district has been working for weeks on a reopening plan that would continue educating students while keeping everyone safe.

Ketchikan’s revised “Smart Start” plan shuffles grade levels and teachers between school buildings — sixth-graders who would ordinarily attend elementary schools would instead be enrolled in Schoenbar Middle School. Eighth-graders would move to their own separate wing of Ketchikan High School, though they’ll stay enrolled at the middle school.

Sixth- and eighth-grade teachers would relocate alongside their students, the district told parents. Administrators say it’s part of an effort to make sure as many kids can physically attend school as possible — while still adhering to state and federal health guidelines that recommend spacing kids at least six feet from one another.

The new plan would have Ketchikan’s kids in front of educators two to four days a week, depending on grade level.

Elementary-schoolers would have the most face-to-face time with teachers and aides — four days a week total.

“And when we talk about on-site, that means school building, or the annexes,” said Superintendent Beth Lougee at a virtual town hall meeting Monday.

It’s not clear where those annexes might be physically located. Previously, the district planned to staff local church buildings with teachers’ aides for what it then called “extended learning opportunities.”

The district says elementary-schoolers would be required to “participate” in the annex programs, though not necessarily in person.

“Yes, they are expected and expected to be there, but we will work with you if there are certain needs,” Lougee said.

Sixth- and seventh-graders would spend three days a week in classrooms at Schoenbar. They would spend one day a week working from home or at an annex site.

High-schoolers, including eighth-graders, would have two days a week in physical classrooms and another two working remotely. Like middle-schoolers, they’d have the option to spend their two remote days at an annex, but they wouldn’t be required to physically attend.

Eighth-graders would be kept separate from high-schoolers.

“The plan right now is there should be no interactions, as this will be a secured location within the Kayhi building monitored by eighth grade teachers and administration,” Lougee said.

All students would work from home on Fridays as teachers and staff receive ongoing training.

The district’s two charter schools, Ketchikan Charter School and Tongass School of Arts and Sciences, are not affected by the grade-shuffling. Charter schools have some independence from district administrators and are developing their own back-to-school plans.

Students with special needs would follow an entirely different schedule, which could involve as much as the usual five days a week in school buildings. That’ll be determined between special education teachers and parents.

Masks also play a role in the district’s pandemic mitigation plan: they’ll be required for all students anytime they’re not sitting at their desks, six feet away from classmates. And if there’s an uptick in cases in the Ketchikan area, they could be required at all times.

And if the pandemic really ramps up in Ketchikan, school buildings could close and the district could move to fully remote learning. Ketchikan’s emergency operations center is developing a data-based tool to help school leaders decide when school closures might be necessary.

“We will start school based on a level that is now tied directly to the community-based level,” Lougee said.

Some parents have pushed back vigorously against the district’s back-to-school plan, offering hours of testimony during recent school board meetings. That doesn’t appear likely to change with the recent revisions — a protest was planned Monday afternoon at a busy Ketchikan intersection.

The district is holding town hall meetings Monday about the plan, including online meetings at noon and 3 p.m. and an in-person session at 6 p.m. in the Ketchikan High School auditorium. If necessary, a fourth session will be held in the auditorium at 7:30 p.m.

One very important caveat: the plan has not been approved by Ketchikan’s school board. That body has the final say in how school resumes in the fall. It’s scheduled to take up the plan in a special meeting at 6 p.m. Wednesday.