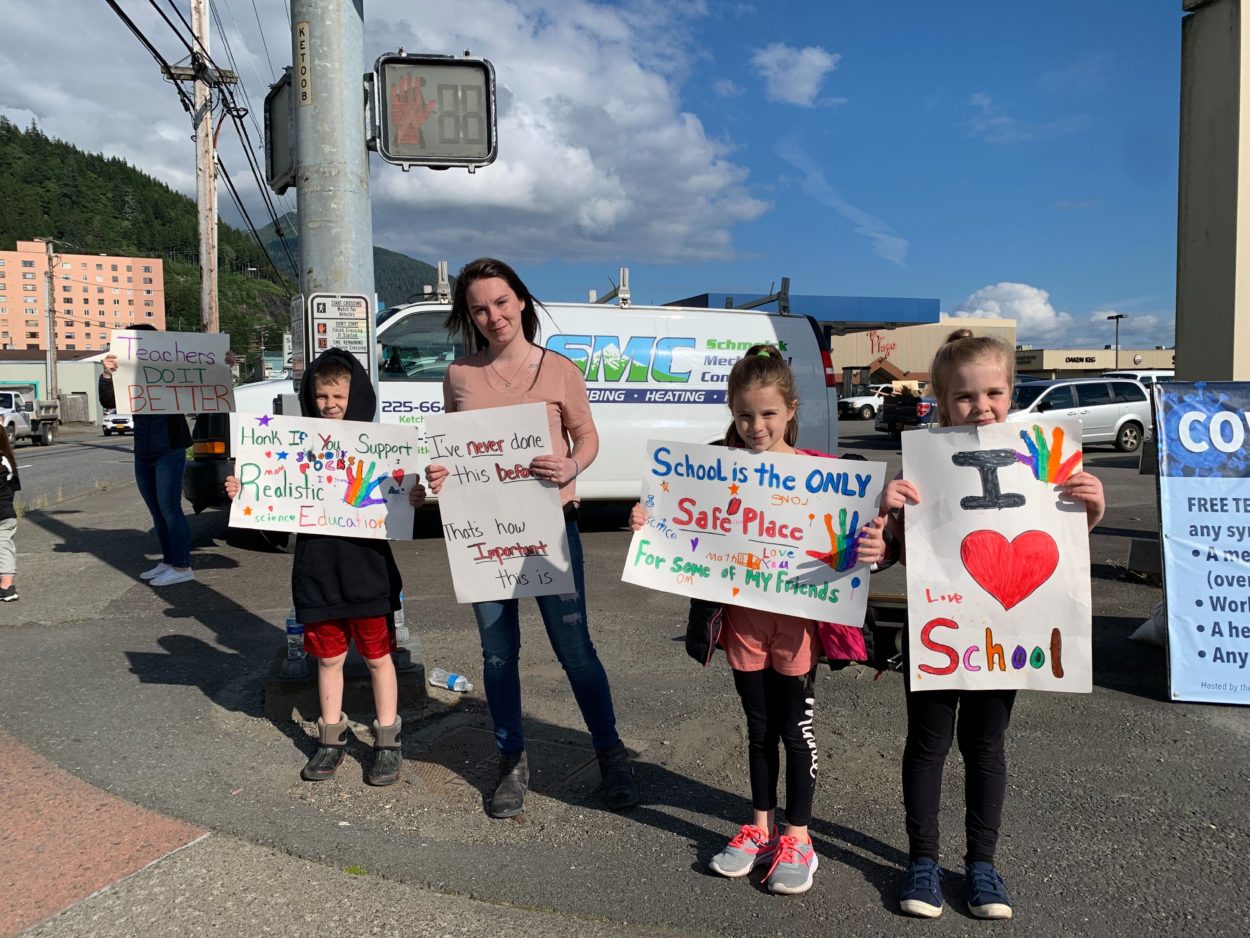 Shelby Reese and her children were among a dozen or so parents and children that turned out to protest the district’s back-to-school plans Monday. She was one of roughly a dozen parents that spoke out against the plan at a town hall meeting later that evening. (Eric Stone/KRBD)

Since Ketchikan’s school district unveiled the first draft of its back-to-school plan this summer, district officials have faced pushback from parents unsatisfied with distance learning. That continued this week as district officials announced new revisions to the plan. Parents also vented their frustrations over a recent restructuring that’s moved administrators  around the district.

Some community members are up in arms over what the district is calling its “Smart Start” plan for the fall. What had been simmering frustration boiled over at an explosive town hall meeting Monday night.

“I can’t even right now. Like, my blood is boiling. That was a joke,” said parent Lauren Munhoven shortly after the town hall meeting wrapped up.

It was a raucous night as roughly a  dozen parents berated district officials in Ketchikan High School’s auditorium. Just a few days prior, the district had come out with its latest revision of the Smart Start plan. Superintendent Beth Lougee explained the changes — more face-to-face time for elementary-schoolers, some grade-level shuffling — and answered some common questions.

Then came the question-and-answer period.

Some parents pushed for a return to normal schooling — five days a week in school buildings. That’s been a common refrain among a group of parents that’s spent hours testifying in front of the school board this summer.

“Based on the CDC recommendation of how much space needs to be between people, our classrooms can only hold so many,” Maxwell said.

“Let’s just say that most of the kids would like to go back to school full-time,” Dale said.

“And a hundred percent of the teachers would like to come back to school,” Maxwell said.

Many parents said they were dissatisfied with distance learning this spring as the pandemic led local and state officials to rapidly close schools. Here’s Rick’s wife, Lisa Dale.

“My daughter was taking AP classes her junior year, and the fourth quarter, she learned nothing. Absolutely nothing. The [online meetings] were about barbecue ribs, and what was going to be on the menu,” she said.

She says she’s worried her daughter will fall behind this year as she applies to colleges.

“And I hope that you guys that are sitting up there make it better, because my daughter wants to go to college and at this point, it’s looking very, very bleak for her,” she said.

Lougee didn’t respond to Lisa Dale personally, but she has said remote schooling in the fall will look very different — and be much more rigorous — than it was this spring, when teachers didn’t assign new work or record grades.

Other parents asked for details administrators couldn’t readily provide — whether pupils will be penalized for skipping required online assignments, what specifically is in store for students with disabilities, how schools will support elementary-schoolers completing classwork at daycares.

“I’m asking you to work with your building principals who are building these plans,” Lougee said in response to one parent’s query.

That was a common response from Lougee — speak with your particular school’s principal. Principals know the parents, kids, the communities they serve. And they’re working out the details. Principals are under contract to return to work August 5, though Schoenbar Middle School principal Sheri Boehlert said many administrators have spent much of their summer thinking about how to adapt programs for the pandemic.

“We’re going to get it figured out,” Boehlert said. “It’s going to look different, but we’re gonna have a really great program for our kids.”

But referring questions to local principals didn’t satisfy some speakers, like Michelle Hall, who has a child at Fawn Mountain Elementary School.

She’s referring to a shakeup of principals, vice principals and other administrators at more than half of the district’s seven schools.

Hall wasn’t the only one who mentioned the personnel shuffle — here’s parent Tiffany Cook.

“I would like for you to justify and explain to us the administration changes that were made on Friday,” Cook said.

We rejoin Tiffany Cook asking about administrators being moved around the district:

“So I would like some explanation of how and why this was done, and why it was done on a Friday night,” Cook asked administrators.

“I totally appreciate —” Mattson said as other parents heckled administrators onstage. “I’m telling you that we’re going to talk about Smart Start tonight. That’s what we’re here to talk about, is the Smart Start.”

“Well, you told us that this was our chance to ask questions and get them answered,” Cook said, “because you made it very clear you can’t do that in the [school] board meeting. And I think that as part of Smart Start we were hoping for consistency and stability for our kids. And that’s not provided by this.”

That point about consistency among administrators? Ketchikan’s teachers’ union agrees.

“It’s kind of like changing the oil in your boat,” said Gara Cesefske, president of the Ketchikan Education Association

She says a pandemic that’s already turning life upside down — especially for teachers — is the wrong time to change school leadership.

“It’s just not the time. You don’t wait to change the oil in your boat when you’re in the middle of Clarence Strait during a gale and you have six-foot waves crashing over your bow,” Cesefske said.

She says that as word spread among teachers late Friday night that some school administrators were being reassigned to other schools, her phone started ringing off the hook. Cesefske says all but a few of the teachers who called her opposed the changes.

Neither Lougee nor school board president Mattson commented on the personnel moves during the town hall meeting.

No members of the public offered support for the district’s back-to-school plan. But as the Q&A session drew to a close, Sheryl Yeisley offered a call to action.

“For those of you who came and spoke tonight, please run for the school board. There’s open seats and we need change. We need parents. We need tribal members. We need people that are going to care about our kids and our community because I’m going to say it: This is unacceptable.”

The filing period for this fall’s municipal elections opens August 3.

District officials may get another earful this week as Ketchikan’s school board takes up the Smart Start plan in a special meeting  at 6 p.m. Wednesday. Public comment will be heard at the beginning and end of the meeting.