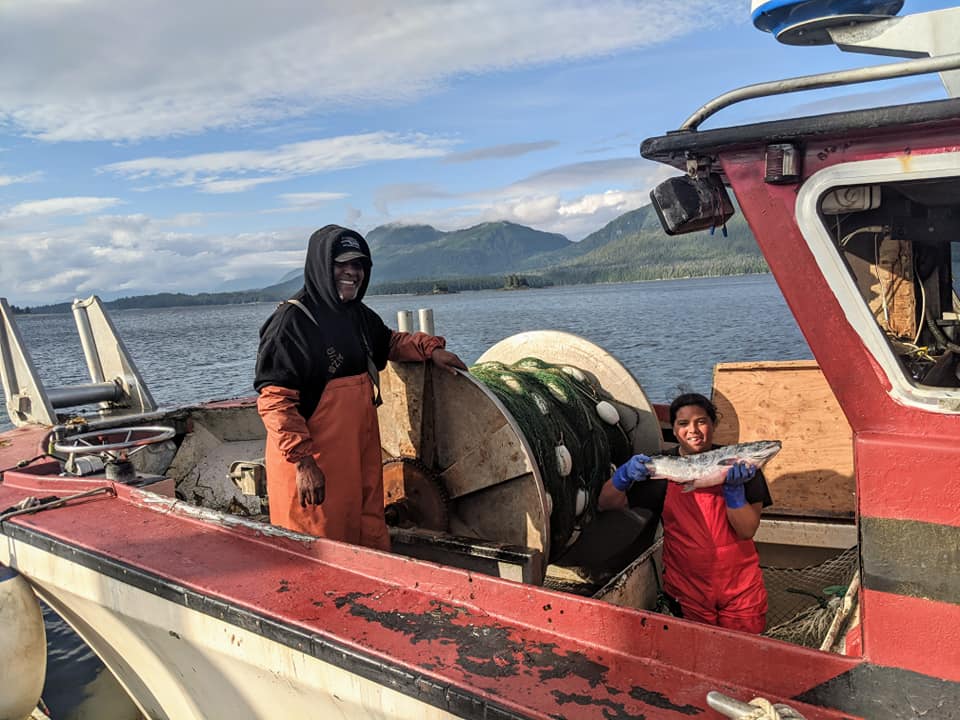 Eldon Atkinson, left, stands on his 32-foot gillnetter, the F/V Deja Vu. Atkinson recently pledged to give away a day’s catch once a week to the people of Metlakatla for the rest of the summer. (Photo: Johon Atkinson via Facebook)

“So I’m going to be doing this over here in Metlakatla for the rest of the summer,” he said. “You know, every week, we’ll bring in one day’s full catch and just distribute it among the people over here.”

His son, Johon Atkinson says he’s coordinating giveaways from his father and his cousin, Cameron Hollywood, through his cultural organization, Liwaayda. It also sponsors a dance group, teaches traditional fishing and gathering methods and serves dinners for elders.

“Liwaayda, in our Sm’algyax language, our traditional Tsimshian language, translates to ‘pull together.’ Because we always want to be able to work together, pull together, take care of one another,” the younger Atkinson said.

The elder Atkinson says that with salmon prices paid to fishermen low, he estimates a day’s catch on his 32-foot gillnetter is worth a couple hundred dollars in cash. But he says to the community it’s a small fortune.

“When I gave away almost 1,000 pounds of salmon, you know, I’d never seen so many smiling people and big smiles on their faces,” he said. “They keep on texting me saying they’re already preparing the salmon for their smokehouse or jarring it and so — just to see the smile on their face, that’s what makes me happy, you know?”

There’s more information about the giveaways at the group’s Facebook page.