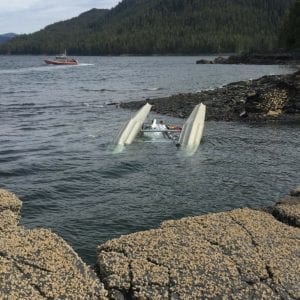 Debris from a deHavilland Beaver is seen following a mid-air collision in George Inlet near Ketchikan on May 13, 2019. Federal investigators recently released over 300 pages of reports on the crash. (U.S. Coast Guard image)

Six people — including five cruise tourists and a local pilot — were killed, and 10 people were injured when a Mountain Air Service and Taquan aircraft collided above George Inlet during a May 13, 2019 flightseeing trip northeast of Ketchikan.

The 300 pages of documents — released on Aug. 6 — say that the pilots likely only had a chance to see each other for a few seconds periodically in the minutes preceding the collision. One plane was not capable of receiving alerts about nearby aircraft, and was not transmitting data about its own altitude to the other plane.

The National Transportation Safety Board documents include passenger interviews, weather studies, a timeline, injury charts and other reports.

Passenger interviews taken following the crash describe a cloudless trip to Misty Fjords National Monument. One passenger recounts a steep descent followed by struggling to get seat belts off as the Taquan plane rapidly filled with water. One of the 11 people on that plane died.

The widow of Randy Sullivan, the Mountain Air Service owner and pilot killed in the collision, reportedly told investigators that her husband had expressed concerns about flying near Misty Fjords. According to the report, she told investigators that Sullivan said he was concerned that many of the pilots flying near the national monument didn’t have much experience flying in the area.

The Mountain Air Service plane broke up following the impact. All five people on board were killed.

The crash occurred during a summer that saw four floatplane crashes in Southeast. Another Taquan Air plane crashed near Metlakatla about a week after the midair collision, killing two people.