What’s in Ketchikan’s historical archives about the 1918 pandemic? 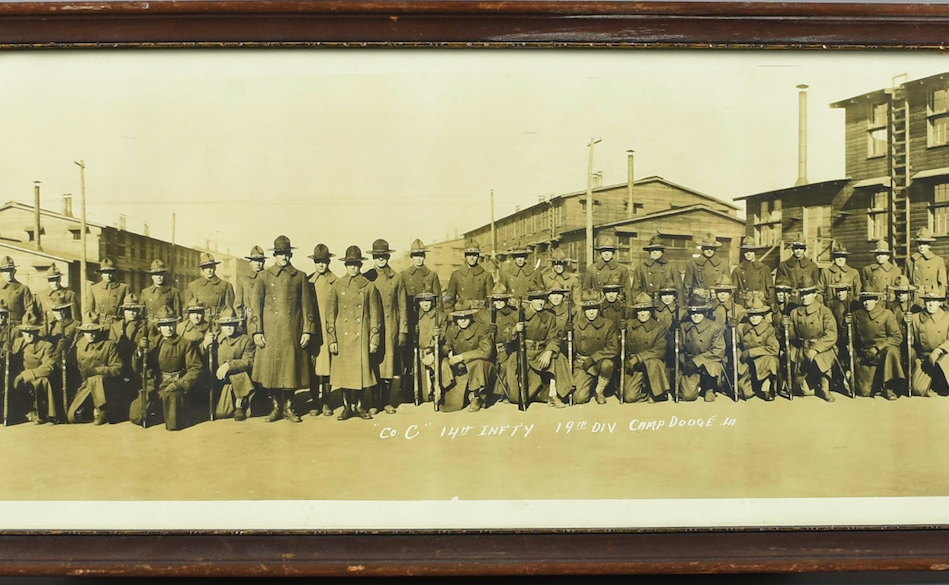 This image of a group of men at Camp Dodge, Iowa, is one of the few artifacts relating to the 1918 pandemic in the Ketchikan Historical Museum. A group of men from Ketchikan traveled to Camp Dodge to prepare to enter World War One, and it was there that the first member of the Ketchikan community died from the 1918 flu. (Courtesy of Ketchikan Museums)

When COVID-19 hit in early spring, the world began looking back more than 100 years ago. It was then that a similar global pandemic hit Alaska. But what’s in Ketchikan’s historical archives about the 1918 Flu?

In a museum dedicated to Ketchikan history, there’s a lot of what one might expect to find: Native art, loggers’ hats and other tributes to Ketchikan’s past.

But Hayley Chambers, the museum’s senior curator of collections, points out something odd.

In the museum’s basement archives, surrounded by artifacts and rows of filing cabinets, there’s a yellowing photograph of young men in military uniform at Camp Dodge, Iowa.

“I’ve moved this piece around a few times while reorganizing our collection storage,” Chambers said. “And I’ve always kind of wondered, why do we have, why do we have this photo from Iowa? What is its importance here?”

She did a little digging. While researching the 1918 flu pandemic, Chambers realized that at least one of the soldiers in the photo was from Ketchikan. Him and others had been shipped to the Midwest as part of the mass mobilization of young American men to fight in World War I.

Chambers says the pandemic hit Camp Dodge hard. She says that the first documented person from the Ketchikan community to die from the virus, a man named Harry Shelton, died there, thousands of miles from home. But the flu came to Alaska soon after.

Alaska was spared the first wave of the Flu of 1918, which killed hundreds of thousands when it hit the U.S. that summer. But the so-called  “Spanish flu” made landfall in Juneau on Oct. 14 and quickly spread throughout Southeast.

The flu particularly devastated Native communities. An Alaska Division of Public Health report says that between 1918 and 1919, Native people accounted for more than 80% of fatalities from the flu.

But while statewide statistics survive, we don’t know much about what the pandemic looked like in Ketchikan. Chambers says other than the photo at Camp Dodge, the rest of the story comes in bits and pieces from old newspaper clippings.

What the newspaper accounts tell us is that Ketchikan suffered its first pandemic death in town about a week after the virus arrived in Juneau. According to a local newspaper, the Daily Progressive Miner, more than 80 people fell ill.

As the pandemic spread across Alaska, another newspaper, the Alaska Pioneer, began publishing lists of public health restrictions implemented in the Lower 48.

“Five, keep your hands clean and keep them out of your mouth. Six. Avoid expectorating in public places and see others do likewise. That’s coughing,” Chambers read from a fall 1918 issue of the Alaska Pioneer.

“Seven, avoid visiting the sick. Eight, eat plain nourishing food and avoid alcoholics. Nine, cover your nose with your handkerchief when you sneeze and your mouth when you cough.”

Sage advice, even a century later.

While the archives give a sense of possible precautions against the flu, there’s a lot that’s not in the Ketchikan’s museum archives. Did local governments debate pandemic precautions? How did they enforce health mandates? Did any local businesses close for good?

One article, though, depicts a scene eerily similar to this summer — the Daily Miner described the town’s devastated hospitality sector.

“Both lobbies of the hotels are empty these days, not a sign of we except a lonely cleric or two behind the counter,” the Daily Miner read. “All the lounge chairs have been removed and signs conspicuously posted in the doors reading, ‘No loitering allowed by order of the health officer.’ The pool tables are covered and the popular hotels look as if they were all decked out to attend their own funerals.”

As businesses reopened and the pandemic faded, most of the artifacts, such as signs announcing closures and public health best practices, vanished with time. Chambers is a bit wistful more wasn’t preserved.

“I think back to, you know how cool it would be if any of those signs still existed. I’m not aware of it. But I think that that kind of, you know, reinforces our collecting nowadays to gather things before they are thrown away.”

In an attempt to preserve the current pandemic, Chambers says the Ketchikan Historical Museum is collecting artifacts from community members about Ketchikan’s experience with COVID-19. She suggests objects like signs about closures, face masks, grocery receipts, unemployment paperwork and more. Questions about artifacts can be directed to the museum.

The museum is also conducting an oral history project open to anyone in the community.

Who knows? COVID-19 memorabilia could be illuminating for Ketchikan’s residents…  a hundred years from now.

An earlier version of this story incorrectly referred to Camp Dodge as Fort Dodge.