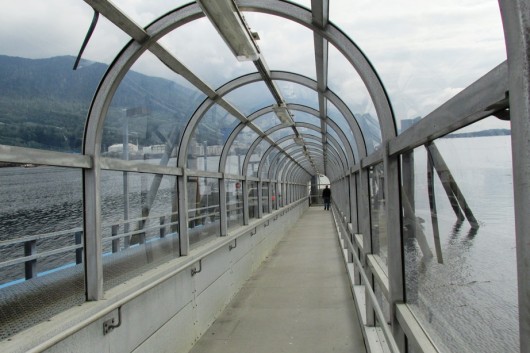 Crews will soon break ground on roughly $106 million worth of federally-funded projects aimed at improving access to Ketchikan’s island airport.

The project includes new ferry berths, along with expanded parking lots and an indoor ferry waiting area on the ferry berth on the Ketchikan side. Other improvements include courtesy vans for travelers and luggage from the ferry terminal to the airport and kiosks that would automate ferry fare collection.

It uses federal funds left over from the canceled bridge project that would have provided a bridge spanning the Tongass Narrows to the airport on Gravina Island.

State Sen. Bert Stedman says that in the years since Congress’s original 2005 appropriation, much of the money has been spent elsewhere in the state.

“So this is the residual funds left over from the bridge project, and we’re using a good portion of it to enhance the transportation corridor across the straits,” Stedman said in a phone interview.

That bridge was famously supported by Sarah Palin when she ran for governor in 2006. But Gov. Palin canceled the bridge project. She later derided the so-called “bridge to nowhere” as an example of wasteful federal government spending during her 2008 campaign for the vice presidency.

Improving access to Gravina has long been a priority for local officials in Ketchikan. Stedman says improving the link across the Tongass Narrows could spur development and help expand the local tax base.

“Well, Gravina Island has a lot of opportunities and a lot of flat land, which — almost all of our communities in Southeast are restricted by lack of flat land,” Stedman said.

The Sitka Republican says the timing of the projects is fortuitous — with state capital budgets sure to be stretched thin in years to come, Stedman says he’s happy to see $100 million in projects getting underway in Ketchikan. Work on the projects is expected to get started this fall and wrap up by 2023.