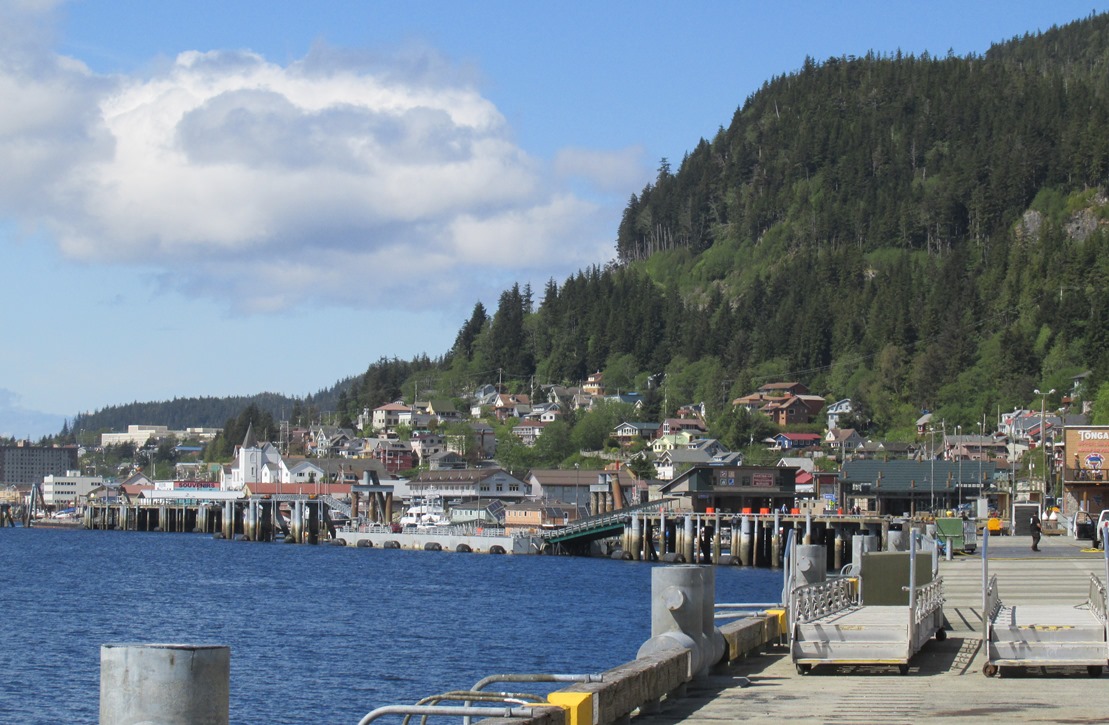 The public can now read competing proposals from private entities vying to run Ketchikan’s cruise ports for decades to come.

A bid from Ketchikan-based Survey Point Holdings doesn’t promise tens of millions upfront. Rather, the city would continue to collect $7 per cruise ship passenger while being freed from the liabilities of paying for the downtown berths.

Survey Point’s bid is radically different from that of the other competing proposer, Ketchikan Port Solutions. That’s the official name of a partnership between international port operator Global Ports Holding and Anchorage-based ConRAC Solutions.

Here’s one key difference: Survey Point would allow the city of Ketchikan to continue charging its $7 head tax. In exchange, the company would add an additional $10 per passenger to cruise lines calling on Ketchikan — raising around $12 million a year for the company using the 2019 season’s figures.

For the city, assuming the same number of visitors, the $7 head tax would bring in $8.4 million annually. That’s a stark contrast from competitor Ketchikan Port Solutions’ proposal, which would be to keep the vast majority of the city’s head tax but pay at least $40 million to the city up front over the next seven years.

Another important difference is in the upfront fee. The city asked a prospective port operator to offer at least $35 million in unrestricted funds in exchange for the right to operate the port. Ketchikan Port Solutions offered between $40 and $45 million spread over seven years.

City Council members have said one of the city’s goals in seeking a private operator is to free up funds currently tied to the port. Federal law requires any fees charged to passengers and ships to directly benefit vessels. It’s not clear whether an upfront payment would be subject to the same restrictions. A legal opinion commissioned by the city remains under wraps, though the City Council could vote to release it.

Survey Point, for its part, indicated that upfront fees likely would be restricted to the port, since the fee would likely be in effect paid by cruise ship passengers visiting Ketchikan.

So Survey Point isn’t offering cash up front. Instead, it’s offering to assume around $30 million of the city’s bond debt used to build the port. Ketchikan Port Solutions would also take over payments as well as offer $40-45 million cash.

Survey Point also proposes to free the city from an estimated roughly $62 million in lease payments for Berth IV. Ketchikan Port Solutions is offering the same.

But Survey Point is proposing a $500,000 per year lease payment that would be backed by fees charged to vendors, vehicles and other port users. The company says that means the half-million a year would be essentially unrestricted. It would also rise with inflation. The company says that would pencil out to about $18 million over the 30-year life of the deal. Ketchikan Port Solutions does not offer a similar lease payment. It instead replaces the city’s $7 head tax with a $0.50 to $1.25 per passenger fee. 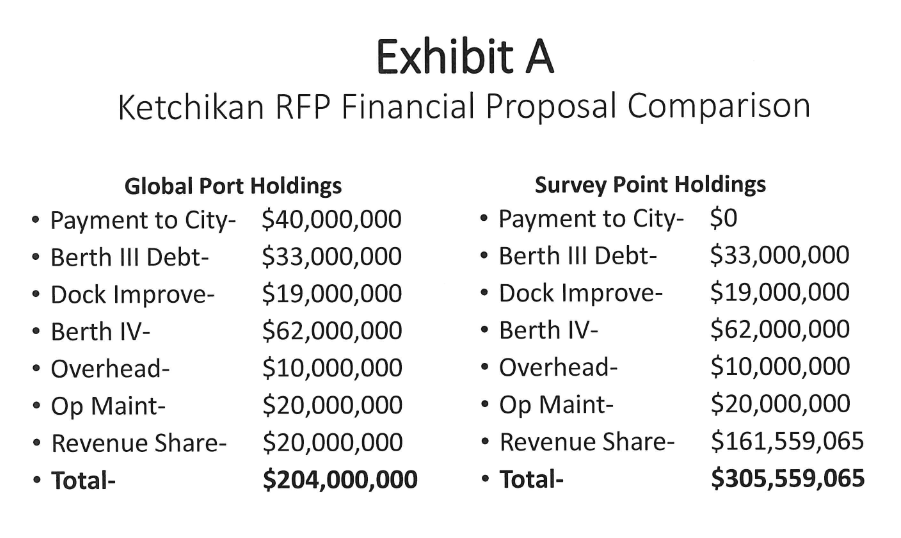 A financial analysis commissioned by the city doesn’t recommend one proposal over another, but says Survey Point’s arrangement could be more profitable than Ketchikan Port Solutions’ bid — or even keeping the port city-run.

A financial comparison of the three options — including the do-nothing option — seems to indicate that Survey Point’s proposal would be the most profitable to the city in terms of net present value (Piper Sandler Companies graphic, click or tap to enlarge or read the full analysis here)

But that may not be not the full picture. Ketchikan City Manager Karl Amylon said in a phone interview Thursday that the analysis only compares the dollar amounts the city would take in under each proposal, not potential restrictions on how that money could be spent.

Survey Point’s Ethan Berto wouldn’t go on tape, but he said Thursday that he acknowledges that the city would be restricted on how it spent much of the revenue from Survey Point’s proposal due to federal law. But he suggested that the cruise industry would be willing to negotiate with the city over some of the finer points.

Amylon said he anticipates a full presentation of the financial analysis of the port proposals will be scheduled for a future City Council meeting.