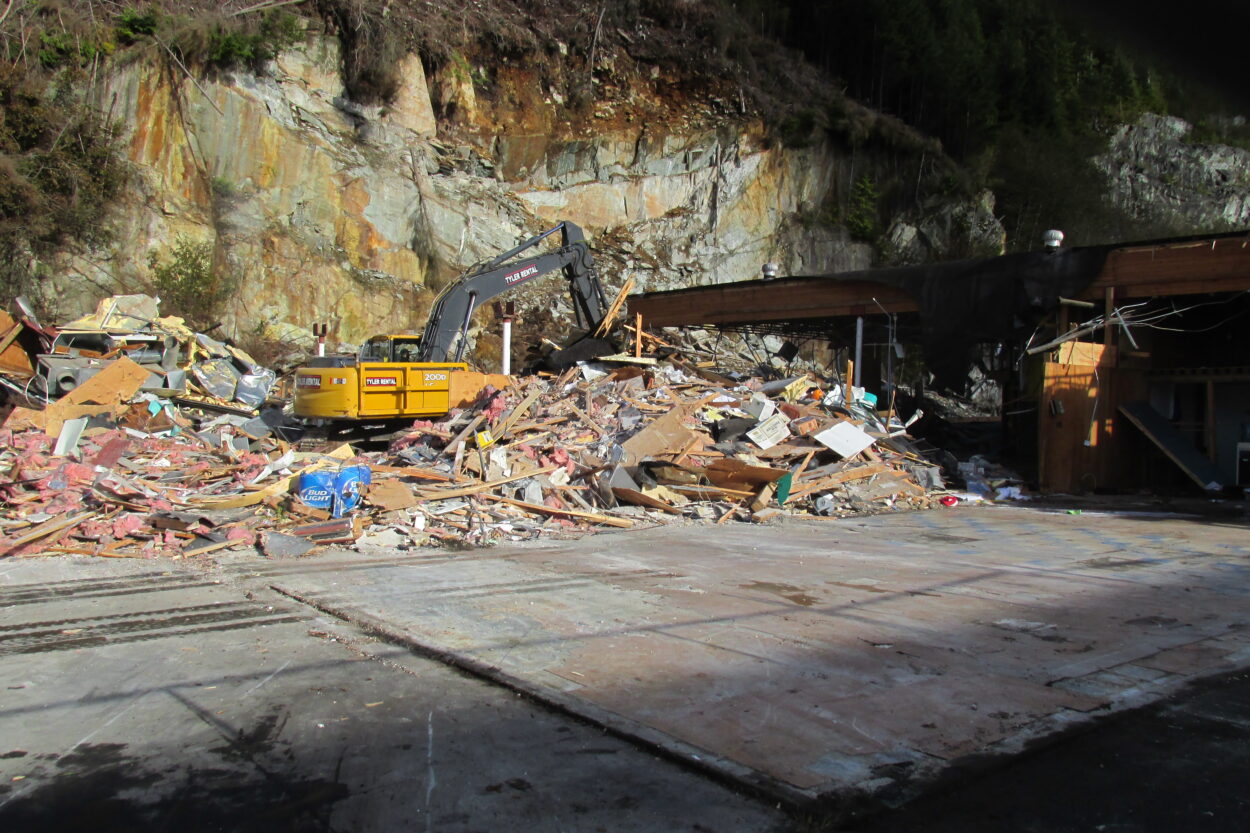 A century-old family business in Ketchikan was hit by a natural calamity earlier this year. A landslide sent uprooted trees, rock and debris onto Tatsuda’s IGA supermarket leaving the structure beyond repair. KRBD visited the site as the former grocery store building was razed.

In celebration of Tatsuda IGA’s 100th anniversary, a complete remodel was completed and the store rededicated in 2016. But, four years later, in the early morning hours of February 27, a rockslide significantly damaged the downtown Ketchikan grocery store and adjacent liquor store.

“Just by the grace of a much higher power, nobody was in the store when it happened.”

That’s Katherine Tatsuda, CEO of the family grocery business.  She takes me on a tour of the building as crews do final prep work before demolition. As we walk toward the back of the building, Tatsuda is remarkably upbeat.

The building is now a shell with almost all the fixtures removed from the interior. Full and empty food packages, broken equipment, and unidentifiable merchandise stick out from a large rock and debris pile on the uphill side of the store. Buried beneath are the bakery and meat departments.

“We had our big meat walk-in cooler that was stocked to the brim because we were having a meat sale that was scheduled for March 1st, so just a couple of days after the landslide happened.”

Ken Holmes is with Marble Construction. He speaks with Tatsuda about plans for the day. Items are being salvaged including electrical panels, light fixtures and automated doors. Asked if this project is a challenge…

“It is, but most of the work is going to be done by that big machine out there. We have some little work to prep for when he starts taking everything out.  But when he starts munching and crunching, we’ll be away from the building.” 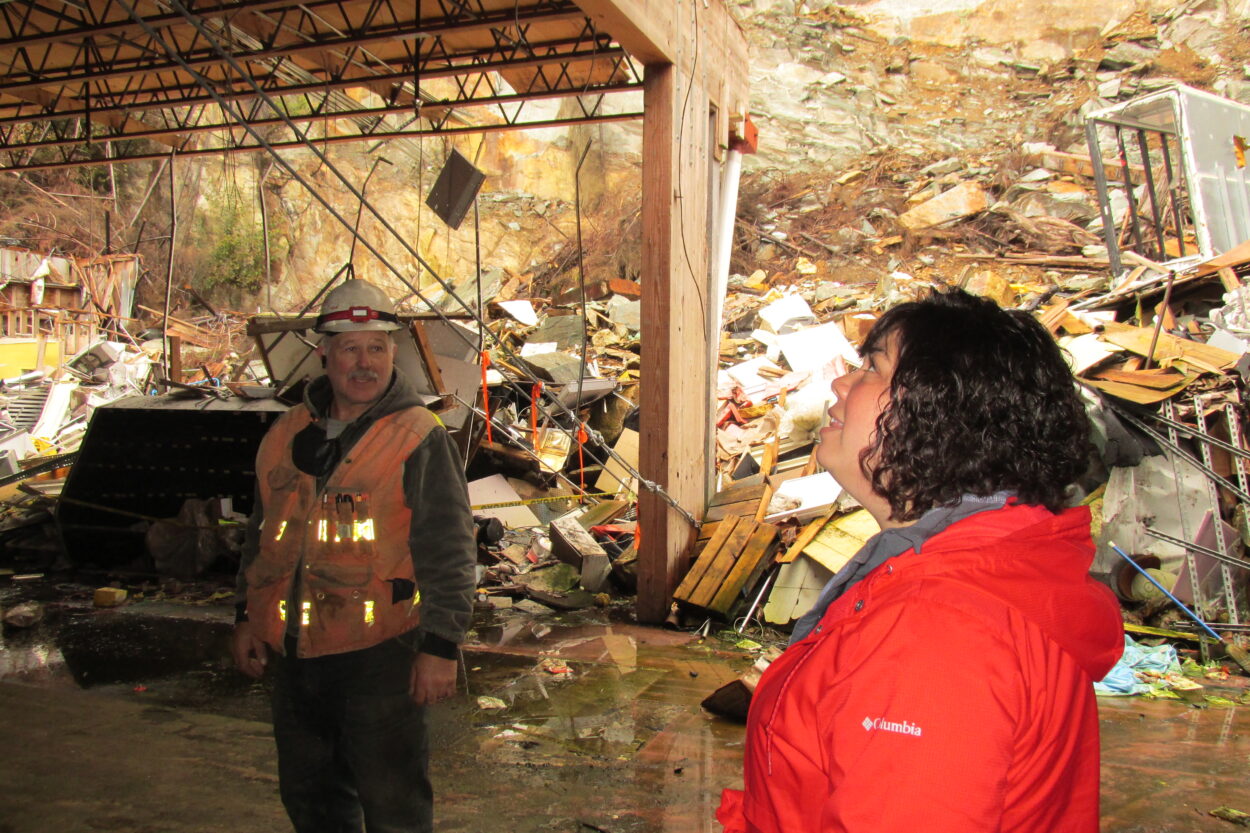 Holmes says most of the debris will be taken to Marble Construction’s rock pit and burned. Anything that can’t be burned will be taken to the city landfill.  He and Tatsuda say eagles, cats, rats and other birds have been scavenging through the pile and may continue as more food items are unearthed. It’s estimated that it will take about a month to completely clear the lot.

Though it might have been considered an “act of God,” Tatsuda says the insurance company conducted a five-month analysis and determined it did not fall under that exemption.

“Based upon the information they had, they determined that they could not uphold the landslide exemption. I think they thought there was some possible cause outside of natural disaster.”

She says a fair settlement is still being worked out.

“Alaska National has been a wonderful company to work with. Very professional. Very fair. For it being a terrible experience, it’s been a good experience working with them.

“I’m in the really early planning of what’s next. So the Tatsuda’s, what that was, will not be coming back, but there will be something that will be coming in the future.”

While continuing to determine the future of the corporation, Tatsuda is working as interim manager at Ketchikan Radio Center and has her own leadership consulting service. She says Tatsuda’s Gas at Last gas station will remain open, and, if you see a lot of boats on the property, that’s because they are leasing storage space to the Bay Company, a marine sales and service center, located across the street. 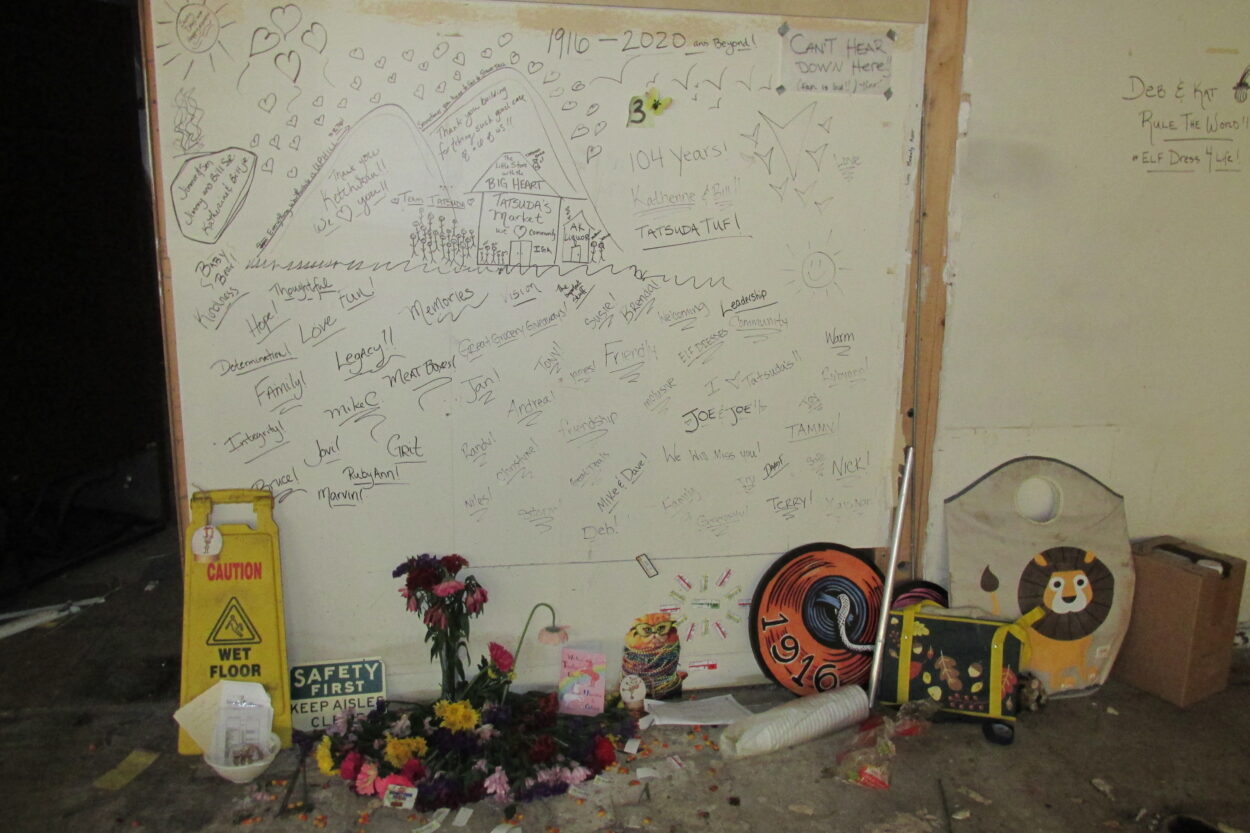 A memorial inside Tatsuda’s IGA created by management and staff displays some of the items found in the rubble and includes memories and inspiring messages (KRBD staff photo by Maria Dudzak).