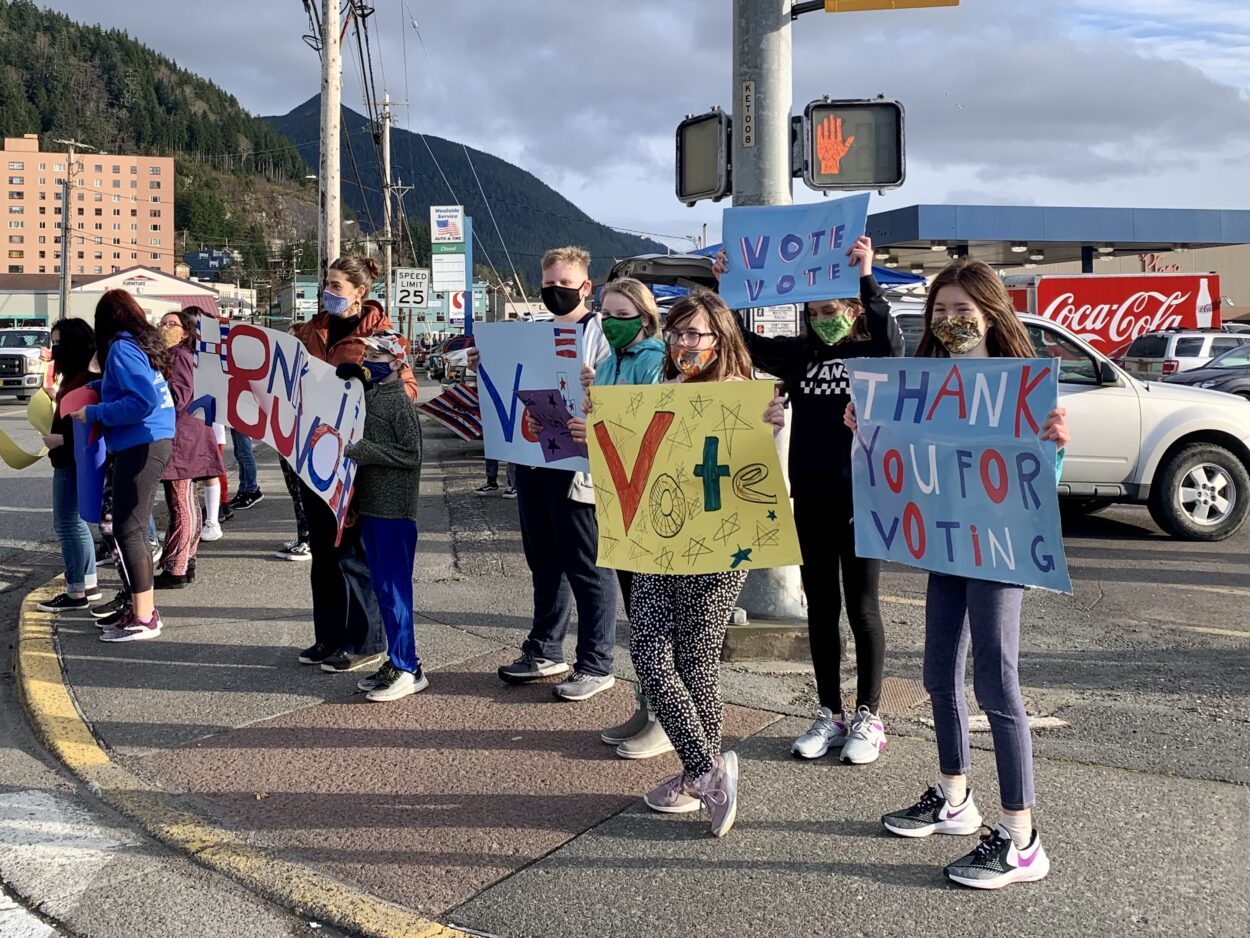 By all appearances, Ketchikan’s polling places were crowded but running smoothly on Election Day. KRBD’s spoke with voters and officials in southern Southeast to get a sense of how things are going as final ballots are cast.

At a busy Ketchikan intersection, sixth-graders from Ketchikan’s Houghtaling Elementary are too young to vote. So they hold signs encouraging adults to cast their ballots.

“Well, we’re here so that people will try and get to vote and so they will speak up and speak for their rights,” said Brianna Gilson.

It’s a break from what has been a deluge of mailers, radio ads and sign-waving — in fact, both candidates for state House District 36 were campaigning at that same intersection just hours earlier.

Borough Clerk Kacie Paxton helps run Ketchikan’s elections. And as of 4 p.m. Tuesday, she said things are humming along

“Voting is going very well,” she said. “Precincts are up and running with a higher voter turnout.”

She couldn’t give specific numbers but estimated that 2020’s turnout is already higher than four years ago. That’s in part, she said, because of higher-than-usual early and absentee voting.

At a polling place inside Ketchikan’s Plaza Mall, Some voters said they felt anxious. Stephanie Harding said she’s casting a ballot for her children’s future

“You know, I have four daughters. I just want what’s best for them in a free country, where they have choices, instead of being told what to do,” Harding said.

“I think I’m just as anxious and nervous as everybody else is,” she said. “There’s been a lot of talk about voter fraud and, and how this election, like a lot of elections will take a little bit longer to count all the ballots, especially all those that mailed in.”

Vrabec was standing in line to vote around 1 p.m. In her hand is her completed absentee ballot. She said she never found the time to buy postage.

“I personally actually requested an absentee ballot because I did get sick, and I wasn’t quite sure if I was going to need it or not. So I brought that here with me today, just because I wasn’t 100% sure how that would work,” she said.

“I feel excited. I’m not worried. I just hope that there’s a lot of peace. And there ain’t a bunch of rioting because there’s no sense, right? Everybody has a right to their first and second amendment rights,” Boling said.

He wasn’t alone with concerns of post-election chaos.

Turnout has also been reported as healthy in the region. In Metlakatla, around 2 p.m. Mayor Reginald Atkinson reported voters have been out in force on the Annette Island Reserve.

It’s too early to project winners and losers; polls in Alaska remain open until 8 p.m. People under quarantine can still vote on Election Day, said Paxton — but they’ll need help.

Clarity over the outcome could take a week or more to come in. That’s because the state won’t start counting absentee ballots until a week from today. More than 2,800 absentee ballots in House District 36 have been returned so far, and some 800 or so more could still trickle in before the state’s deadline as long as they’re mailed today.

Anyone experiencing a problem with casting a ballot, can call the state Division of Elections office in Juneau. That number is: (907) 465-3021.