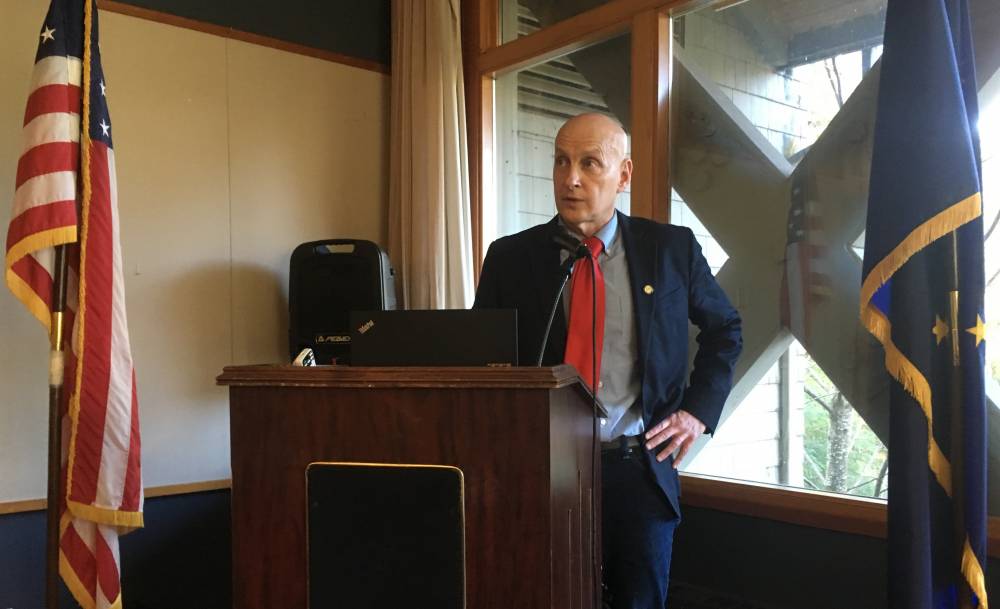 Voters re-elected Ketchikan’s Rep. Dan Ortiz by a wide margin, returning the independent for another two years representing House District 36. KRBD looked at why the former school teacher might have performed so well in a Republican-leaning district that supported President Trump by 14 points.

A sizable majority of voters cast their ballots for Republicans at the top of the ticket. President Donald Trump, Sen. Dan Sullivan and Congressman Don Young each racked up double-digit margins in the district that stretches from Metlakatla to Ketchikan to Wrangell and parts of Prince of Wales Island.

Theresa Darlene Heitman said she was one of those Republicans. She says she’s religious, conservative on social issues and generally fits the profile of the mainstream GOP.

“When I look at the issues, I’m all against abortion, and I’ve been Republican all my life, so I’m just kind of like going to probably do my Republican thing,” Heitman said.

She spoke to KRBD on Election Day at the polling place where she cast her ballot in person. But there was one race where she broke from her party: her local house race.

“I did vote one independent because he’s my buddy, and I know him very well. And he’s good, and the mudslinging did not change my mind at all,” she said.

“Dan Ortiz. Yeah, I really like him,” she said when prompted.

State Republicans didn’t hold their fire in this race. Leslie Becker, the conservative Republican challenger, launched attack ads — in mailers and on the radio — calling Ortiz a liberal ally of Democrats.

But those attacks didn’t seem to land with voters like Heitman. She says she’s a former Alaska Marine Highway System worker, and she sees Ortiz as an ally of the ferry.

“Because Southeast Alaska, you know, the economy is already starting — getting ready to die. And the ferry helps us a lot — all the transportation and the things that go on the ferries — people do not realize how important it is and how much it benefits Southeast Alaska,” she said.

There was another factor in play. Becker polled poorly in communities with large Alaska Native populations. And that helped Ortiz score a 21-point victory.

“I mean, I’d be naive to say that his opponent’s comments weren’t a factor,” Boxley said in a phone interview Monday.

Becker rejected any notion that her writings were racist.

But the Tsimshian artist says Alaska Natives didn’t just not like Becker; many looked favorably on Ortiz’s three-term track record.

Neither candidate was born in Alaska. Becker moved here four years ago and recently completed a term on Ketchikan’s school board. Ortiz came to Ketchikan in 1969 as a child and has been a fixture in public life. He often addresses Ketchikan’s City Council. He knocks on doors. And he says his 21-point win — his largest margin ever in six years — speaks to the power of being close to his constituents.

“District 36 voters know who I am. I’ve been here a long time. They know Dan Ortiz. And, evidently, from what they’ve seen so far, that they’re relatively pleased with the service I provided,” Ortiz said Monday via phone.

And as a corollary, Ortiz says his choice to run as a nonpartisan independent makes it easier to reach voters on both sides of the political aisle.

In the House, Ortiz wielded influence as a vice chair of the powerful Finance Committee.

He says he’s hoping to return to that role. But it’s unclear whether Republicans will have enough members for a caucus or there will be a return to the bipartisan coalition that Ortiz has been a member of.

“I’m pretty confident that I’ll be part of a majority. But confident is different than actually seeing it happen. So we’ve got to wait and see what those two results are,” Ortiz said. Those results are expected Tuesday.

So what’s in store for House District 36’s Republican Party? It’s too early to say. Neither the local GOP chair nor Becker would comment from this story. But like most of Alaska, the Republicans continue to wield more influence than any other party: they remain the second largest voting bloc after undeclared and nonpartisan independents.