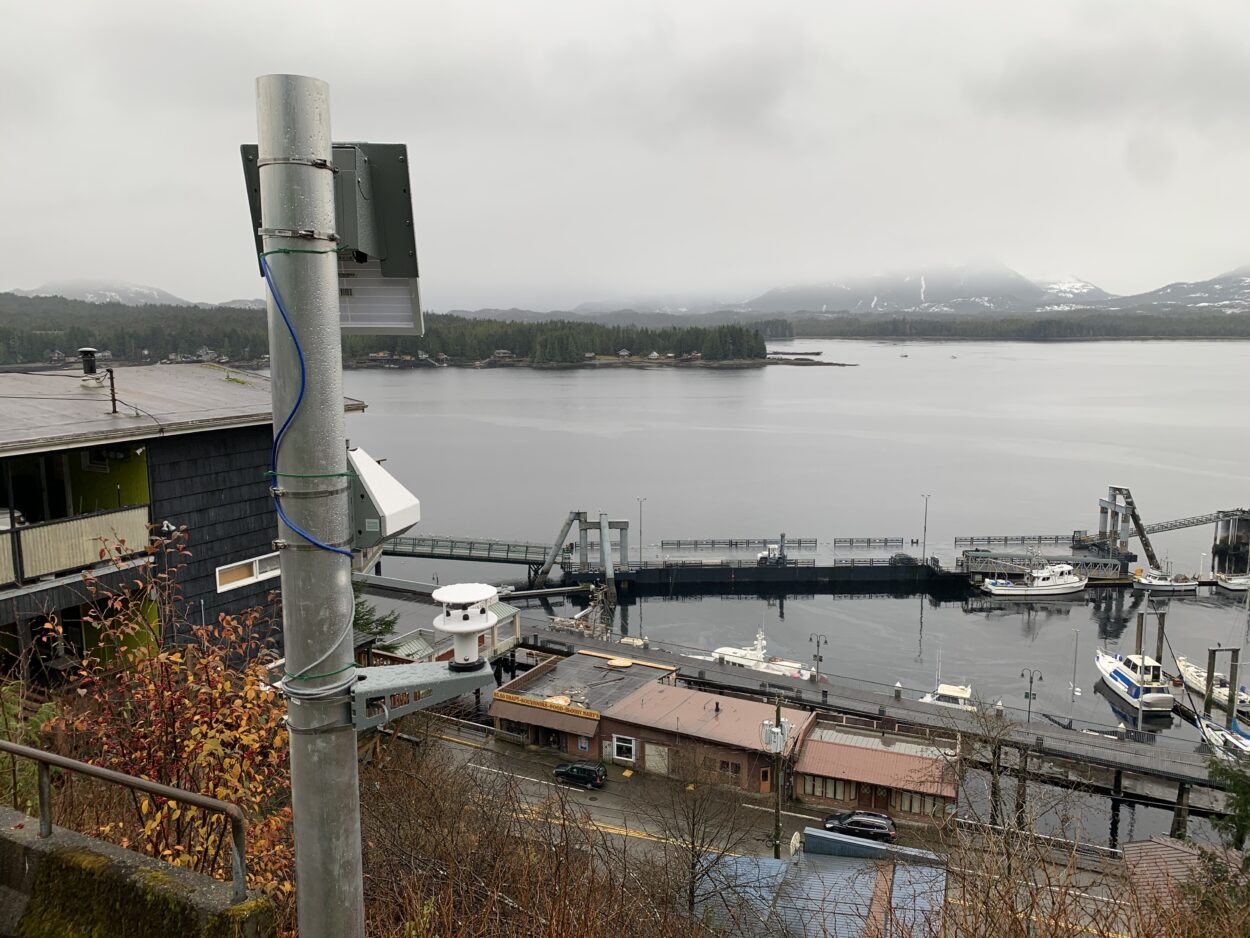 A new air quality monitor overlooks Ketchikan’s waterfront at the corner of Front and Cedar streets on Friday. (Eric Stone/KRBD)

Hundreds of people have complained to the state’s environmental watchdog about air pollution from cruise ships. Scientists hope new air monitors in Southeast port communities will provide some hard data to quantify the impact of cruise ships.

It takes a lot of energy to move a ship the size of an office building. As deckhands cast off lines, giant engines spin up, water rushes from propellers and thrusters, and a bluish white plume of smoke and steam erupts from funnels atop the ship.

That’s led some to worry about the impact these behemoths have on small-town Southeast Alaska’s air quality. Since 2018, the Alaska Department of Environmental Conservation has gotten more than 200 calls complaining about poor air quality in Southeast Alaska cruise ports.

“So last summer, spring and summer, we did a study in downtown Juneau — a pilot study to look at impacts from cruise ships to the Juneau downtown area,” said Barbara Trost. She manages the Alaska Department of Environmental Conservation’s air monitoring and quality assurance program.

“We are trying to collect data that we know we can compare to some known health impacts,” she said.

That pilot study used $250 monitors that measured how many fine dust particles — what scientists call PM2.5, for particulate matter smaller than 2.5 micrometers — lingered in the air. Other unpowered sensors measured sulfur dioxide — that’s a component of diesel exhaust harmful to human health.

Trost says those monitors picked up some data — air quality was generally good, though it dipped as wildfire smoke from British Columbia settled in for a few days. And sometimes, when cruise ships were maneuvering in and out of port, there were upticks in fine dust in the air that lasted a few hours.

“Basically what we could see is the rise of particulate matter that would coincide with sort of a diesel plume from a cruise ship, but we couldn’t really see a whole lot more than that,” Trost said.

So Trost and other state scientists upgraded their gear for round two. New $13,000 sensors are now being deployed around Southeast Alaska, including three in Juneau. The new monitors provide a bevy of measurements — four different sizes of fine dust, concentrations of harmful gases like sulfur dioxide, nitrogen dioxide and carbon monoxide — not to mention meteorological data like wind and air pressure. Trost says it’s the first time they’ve monitored sulfur dioxide and nitrogen dioxide in Juneau since 2001. 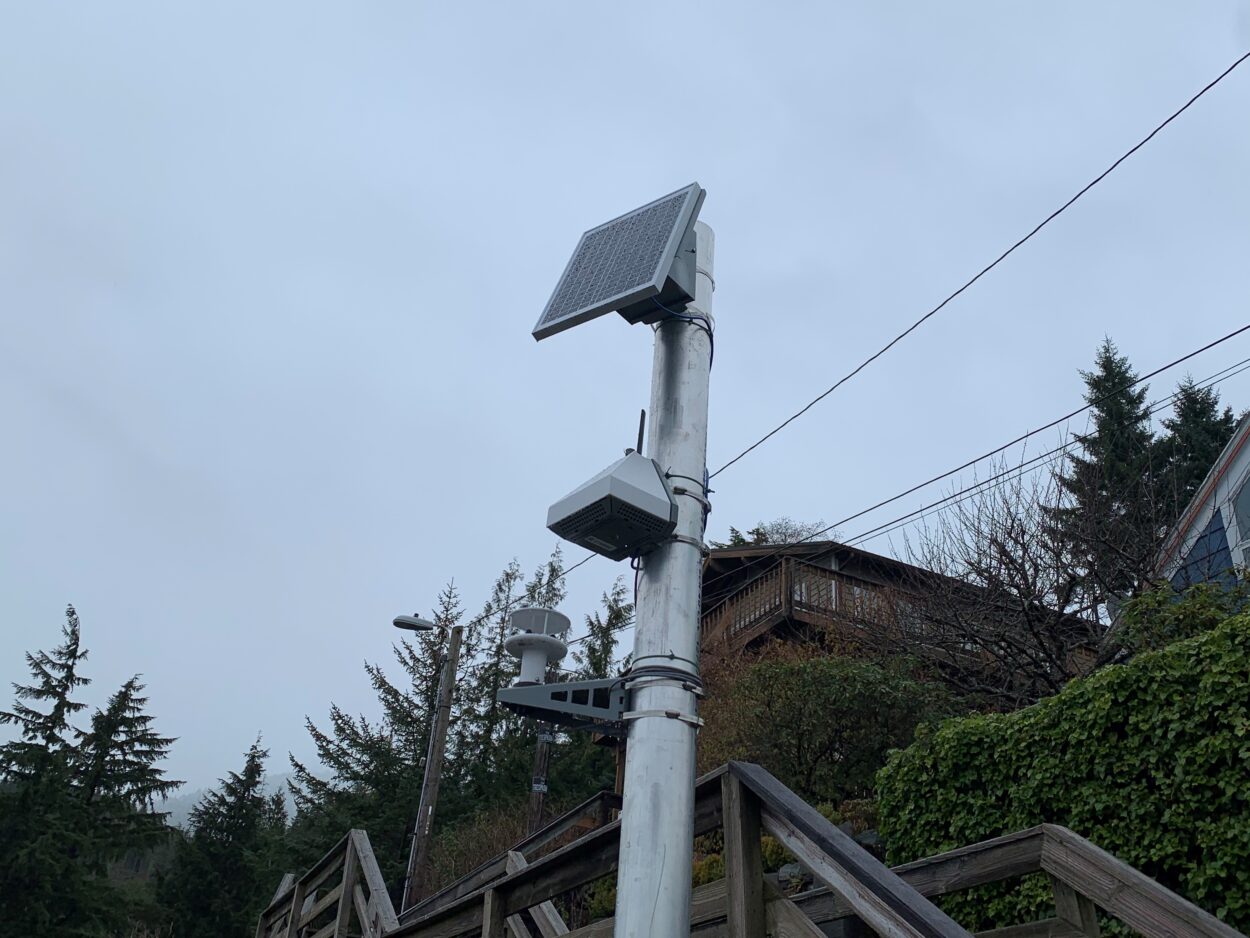 Two of those are earmarked for Ketchikan, thanks to a partnership between the state and the local federally-recognized tribe. Walter Robles is working with Ketchikan Indian Community on the project through Americorps, a federal service program. He says KIC placed one of the sensors above a downtown tunnel near Ketchikan’s cruise ship docks.

“So the one above the tunnel will be good to kind of see, okay, what’s the local effect,” Robles said in a phone interview.

That is, what air quality looks like closest to the ships themselves. He says he’s hoping to place another one at Houghtaling Elementary in a residential area about a mile and a half away.

“Kids tend to be more of a sensitive population, so it’s actually a very good site to have the other one at because we can kind of see, well, is there any — what lingering effects are there, pollutants getting more inland,” Robles said.

Tony Gallegos heads up KIC’s cultural resources department, which houses a variety of environmental monitoring programs. He says that since the monitors are intended to work year-round, they could also provide important information about pollution during the offseason.

“It’s kind of nice to know what’s going on through the winter. You know, if we’re burning wood, wood burning can cause sometimes a lot of harmful pollutants in the air locally that sometimes can stick around,” he told KRBD.

So the new monitors will help answer some existing questions about cruise ship exhaust — and could raise some new questions, too.

State scientist Trost says there three more monitors are waiting to be placed in other Southeast port communities. She says Skagway has expressed interest, but she’s not sure where the last two will end up.

Air quality data for Juneau and Ketchikan is now available online at the Department of Environmental Conservation’s website.