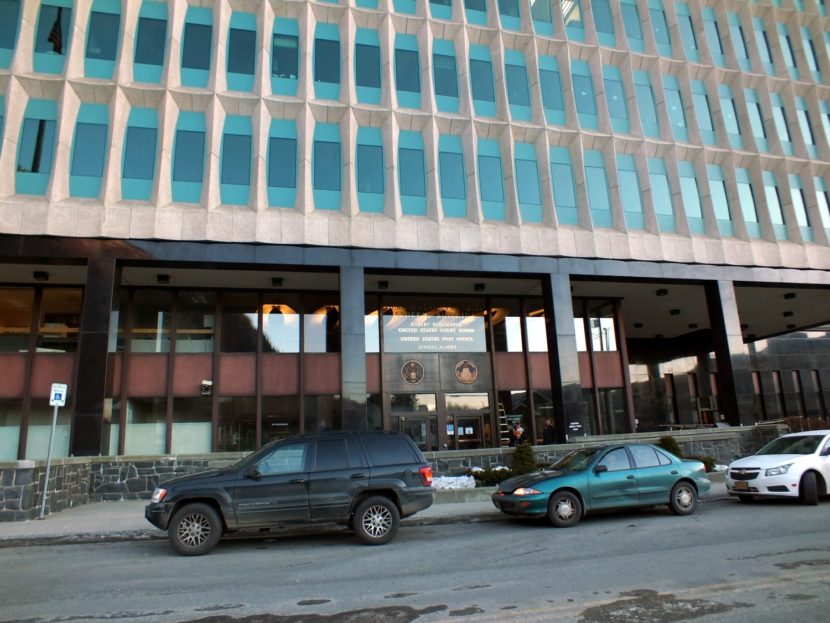 The Robert Boochever U.S. Courthouse is located on the ninth floor of the Hurff Ackerman Saunders Federal Building in Juneau. (Photo by Matt Miller/KTOO)

A 27-year-old Ketchikan man arrested in January with an arsenal of firearms and supplies for homemade explosives in his home has been sentenced to four-and-a-half years in federal prison.

Herman Brown III, who had an earlier drug-related conviction, pleaded guilty to federal charges possessing firearms and ammunition as a felon. The 54-month sentence handed down by U.S. District Court Chief Judge Timothy Burgess is half of what prosecutors had sought. It’ll be followed by three years of probation.

The criminal investigation began in January when Ketchikan’s postmaster tipped off police about Brown receiving firearm parts in the mail. Police followed up with a search of his home, which uncovered a 9-millimeter pistol, AR-15 rifle, 12-gauge shotgun and thousands of rounds of ammunition.

Investigators also reportedly found a variety of materials used to produce pipe bombs and other explosives, though police say the devices weren’t assembled. Ketchikan police then called in agents with the federal Bureau of Alcohol, Tobacco, Firearms and Explosives to help identify the bomb-making supplies.

Officers also uncovered a mask depicting Guy Fawkes, the 17th-century English rebel who plotted to blow up the Houses of Parliament. The masks have become a symbol adopted by anti-establishment activists.

Court filings say Brown was allegedly found in possession of more than a half pound of marijuana and a large cache of hallucinogenic drugs. State charges for the controlled substances are pending.

In 2015, Brown was arrested and charged with threatening Alaska State Troopers with what he claimed was a homemade bomb. He was convicted for evading arrest.