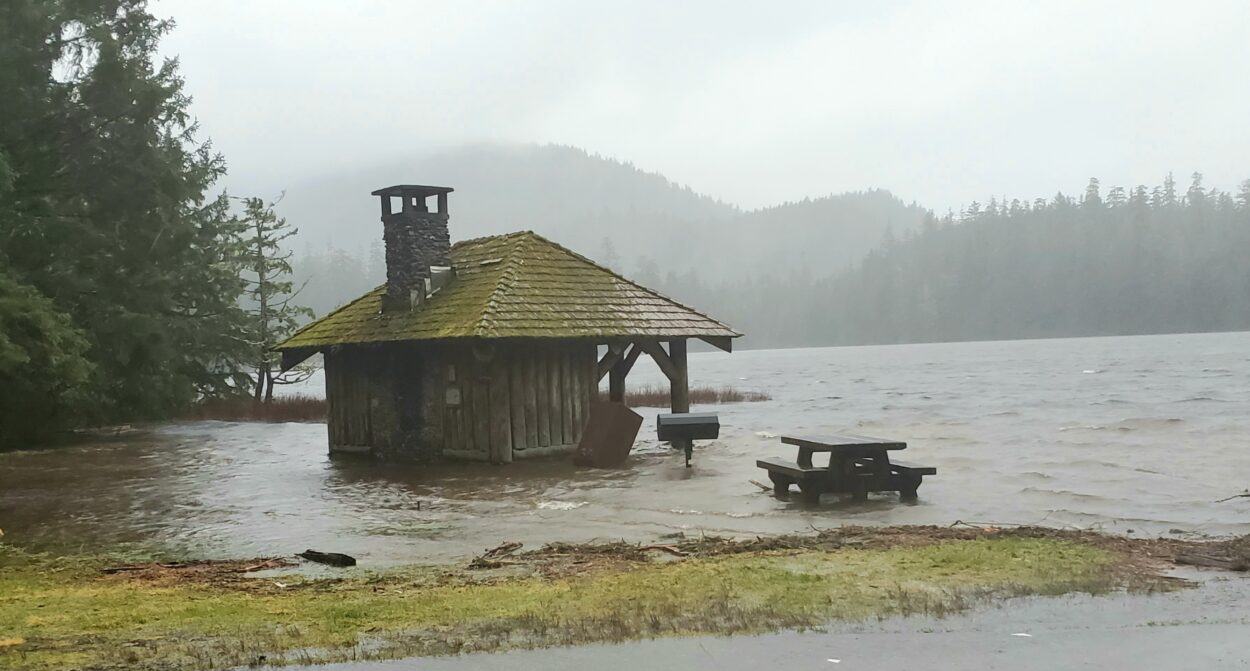 Shelters near Ward Lake — seen here around noon Sunday — were flooded over the weekend. The area frequently floods. (Photo courtesy of Barbara Morgan)

Southeast Alaska is taking a beating from a series of storms bringing high winds and heavy rain. Ketchikan was soaked with about 9.5 inches of rain over the Thanksgiving weekend, according to federal meteorologists. The downpour inundated low-lying areas around nearby Ward Lake, and 50-mile-per-hour gusts knocked out power north of town early Tuesday morning.

National Weather Service meteorologist Caleb Cravens says it’s all part of a series of storms fueled by moisture from the Gulf of Alaska. 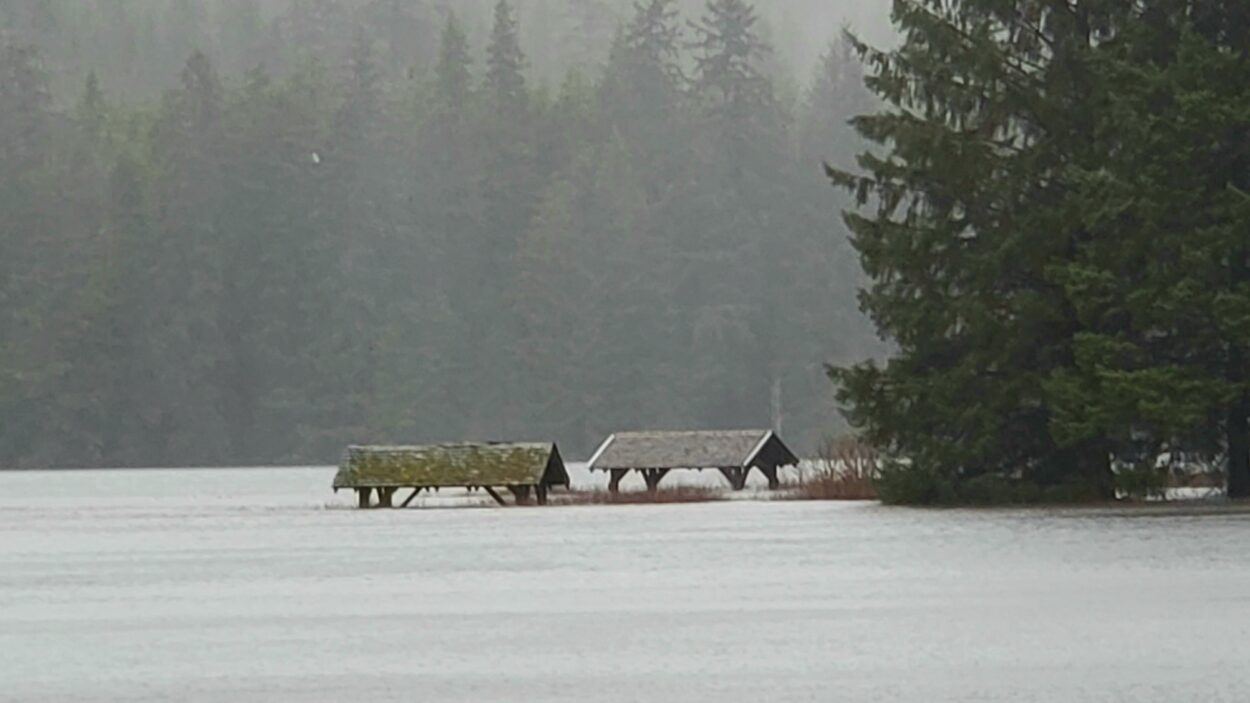 Shelters at Grassy Point, on the shore of Ward Lake, were also inundated. (Photo courtesy of Barbara Morgan)

“It’s not unusual, actually. This type of setup with these atmospheric rivers impact the panhandle quite often. But …  what makes this one stand out is the rainfall rates that we are getting,” Cravens told KRBD.

He says as of Tuesday afternoon, Ketchikan’s airport had received a fraction of an inch in the past 12 hours. But a weather station north of town at Shelter Cove, had recorded 2.96 inches in that same time.

While parts of the northern panhandle are expecting as much as 10 inches this week, the southern half, including Ketchikan, is expected to escape the heaviest rainfall.  It’s capping off a wetter-than-usual November for Ketchikan.

“At the airport, we had 30.05 inches of precipitation for the entire month, and the normal value for the month is 16.63 inches, so definitely well above normal,” Cravens said.

It’s not near a record for Ketchikan, though — one November saw more than 53 inches. But that was more than a century ago in 1917.

Heavy rain, high winds and saturated soil bring the potential for landslides, and that’s a particular concern for city officials in the Prince of Wales Island community of Craig. Its Port St. Nicholas Road has seen at least four slides since late October — including one on Saturday, Nov. 28 that was cleared the following day. 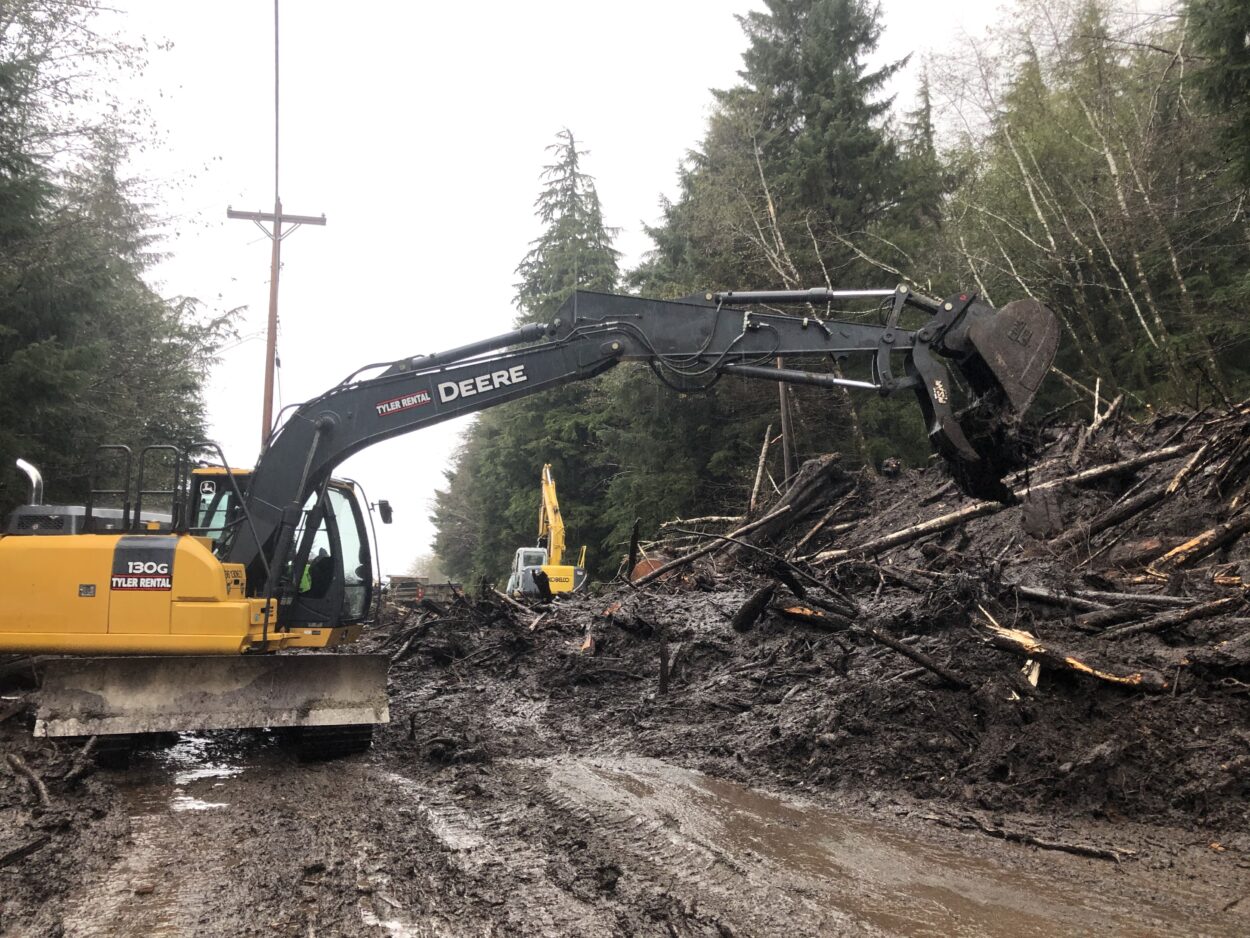 “So we are asking folks who live out there that have to travel out along the Port St. Nicholas Road between now and Sunday to use extreme caution — to avoid travel when they can and to be very cautious if there are any slides or any public works crews out there working,” Templin said via phone.

Correction: This post has been updated to correct the caption on the second photo.