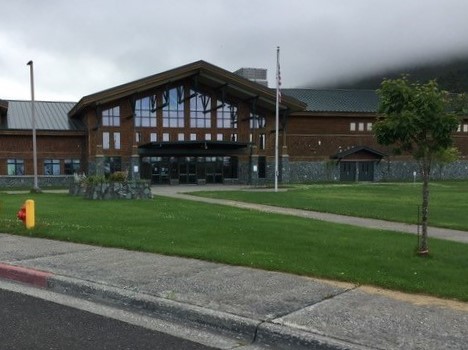 The school board for the community of Craig dramatically raised the number of COVID-19 cases it would take to trigger a move to distance learning on Wednesday.

Some teachers in the rural Prince of Wales Island community say the decision is arbitrary and unnecessarily puts them at risk.

Craig’s school board got an earful at its most recent meeting. Residents told the board they weren’t happy with the district’s move to all-distance education as COVID-19 cases spiked on the island.

“We need to be looking about how we get our kids back in school and how we keep our kids in school,” said local attorney Kristi Kuhnert.

She was one of about 10 residents who called on the five-member board to get students back in physical classrooms.

Craig schools were running under a plan they set over the summer — if there were more than six cases of COVID-19 on Prince of Wales Island in a two-week period, schools would close, and students would move to remote learning. Otherwise, students would attend classes in person.

Craig City School District superintendent Chris Reitan says that for a while, that worked.

“Once the plan was developed and implemented, it’s run fairly smooth,” he said in a phone interview Friday.

But cases climbed in late November, and students were sent home Nov. 30.

“The parents are holding teachers in high esteem, because they’re realizing, ‘Oh my gosh, how do you do this? How do you keep their attention? How do you help them to get their work done? Because I can’t,'” she said.

The near-unanimous chorus of commenters asked the board to raise the number of COVID-19 cases that would trigger a move to distance education.

The board agreed: six cases in two weeks was too low of a threshold. They eventually settled on a new figure  — 25 cases in a two-week span.

“My number was completely random,” school board president Scott Brookshire said in the last few minutes of Wednesday’s meeting.

Public health nurses told the board that each case comes with a different level of risk — for instance, six cases in a single household would be much less worrisome than six cases spread throughout town.

Brookshire said the new plan is more flexible. If there’s an outbreak in city limits, the superintendent has the discretion to move the district to distance learning.

“And we have a backstop in the sense that if the number, if the positives, create more risk, the superintendent can put the brakes on the plan,” Brookshire said.

Now, some teachers are pushing back. Like Craig High School math and science teacher Deanna Claus.

“I am shocked and dismayed that they quadrupled the acceptable rates for in person instruction,” Claus told KRBD by phone Friday.

Claus says she does all she can to avoid contracting COVID-19. She says she wears a mask “all the time.” She says doesn’t see her friends or family.

“I have MS [muscular sclerosis] and am immunocompromised, and this puts me in a high risk category, should I become infected,” she said.

But now, she says it seems like the district is throwing caution to the wind — especially given that there’s not a hospital on the island. She calls the decision “reckless and irresponsible.”

She’s not the only teacher who is upset. The head of Craig’s primary teachers’ union, Courtney Wood, says she would have liked to see the new plan developed with more input from health experts.

Wood is also a teacher at Craig Middle School.

Reitan, says he’s in touch with the two public health nurses assigned to Prince of Wales Island on a regular basis.

“If Public Health is saying, ‘Hey, we have a couple cases of community spread in Craig, and we don’t know what’s going on,’ we would move to higher risk until we knew what was going on,” Reitan said. “Because that’s just what we, in my mind, we would have to do to not only protect our students, but our staff and this community.”

He says the district has a variety of safety measures — temperature checks, health screenings, and portable air filters in each classroom. Masks are mandatory when students can’t be six feet apart, but teachers say that functionally means that students are maskless for large parts of the day.

As of Friday afternoon, the future for Craig’s students and teachers is unclear. Students were set to return to classrooms on Monday. But local pandemic response officials announced a new case of community spread in Craig Friday afternoon.

Reitan told KRBD he’s in contact with health officials as he determines whether to bring students and teachers back for one more week before winter break begins on Dec. 21.