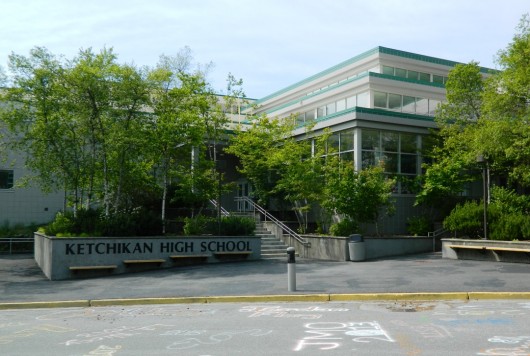 Critics of Ketchikan’s school superintendent say she’s given short-shrift to Alaska Native educators and students. The school board says they are looking into the allegations as they continue to assess her future with the district.

Beth Lougee has been on the job for nearly two years. As the top administrator she’s in charge of Ketchikan’s elementary, middle and high schools.

She’s currently undergoing a routine evaluation as she enters her second full year.

But at a Dec. 10 school board meeting at the High School library, a Ketchikan tribal leader urged the school board to scrutinize the superintendent’s treatment of the district’s Alaska Native staff.

“There has to be a change to the systemic racism that occurs in certain sections of our district,” said Gloria Burns. She’s an elected member of Ketchikan Indian Community’s Tribal Council, but said she wasn’t speaking for the tribe.

“I’m here as an auntie, as a person who is deeply invested in this community,” she said.

She says the school district hired a cultural coordinator but didn’t supply the woman with as much as a desk or chair. A photograph of Teresa Varnell sitting on the floor working on her laptop has circulated widely.

“My auntie, April Churchill, worked in this district as an employee of KIC, and she often went into classrooms with no resources. And when I saw Teresa sitting on the floor, the way my aunt had 20 years ago, I said, the hell with that. There is no excuse,” she said.

She said a KIC-funded art teacher often found herself assigned to rooms without running water. And she said the district had declined cultural training opportunities that would’ve been grant-funded.

So far, Lougee has declined KRBD’s requests for an interview.

Burns wasn’t the only community Native leader to complain about the district’s treatment of its cultural coordinator. Here’s KIC tribal member Sharyl Yeisley, who has children in the district.

“Without offices, proper desks, proper material, and a proper setting to do their jobs, I can’t imagine how they would feel,” Yeisley said.

Yeisley said she’s of Aleut descent and recalled how her people were relocated to a camp in the Ward Cove area during World War II.

“I can imagine in some ways they might feel like my family did, being isolated and separated from other people and watching their peers and their coworkers have things that they don’t have,” she said.

“Have you ever walked in a hallway, stood in the hallway with your — with the top leader, whom you’re serving under, or whom you’re working under, and them walk by you and act like you don’t exist? Because I want you to see this face. And I want you to know that Ms. Lougee has done that to me. And I did not appreciate it. And it was utterly unprofessional,” Johnson said.

A half-dozen people testified at the meeting, including one written comment read aloud by the school board clerk.

Only one came to Lougee’s defense. School district psychologist Derek Meister said it was clear there were some concerns to be addressed. But he said that given the circumstances, he was confident in her leadership.

“I think she does a damn good job. I think she works harder than any other staff in this district,” Meister said. “I think she puts the hours that any of us who put extra hours in — she puts those numbers to shame with how often she’s in trying to make plans and help us through this insane time in our history, this 2020 year.”

And after a more than three-hour closed-door session, Ketchikan’s school board announced they’d need more time. Board president Kim Hodne told KRBD that everyone who spoke up or wrote letters has been heard.

“And those issues are being addressed in a very definite fashion, and I believe all will be pleased with the outcome that we’re working to,” Hodne said.

Hodne said the school board plans to meet again before Christmas and finalize its evaluation of its superintendent early next month.

Beth Lougee was promoted to interim superintendent in 2018 after her predecessor Robert Boyle resigned amidst controversy. Lougee and her husband David both faced formal complaints at a school district in New Mexico in 2017. But she told KRBD earlier this year that the charges were unfounded.