Trump supporters caravan through Ketchikan ahead of Wednesday’s election deadline 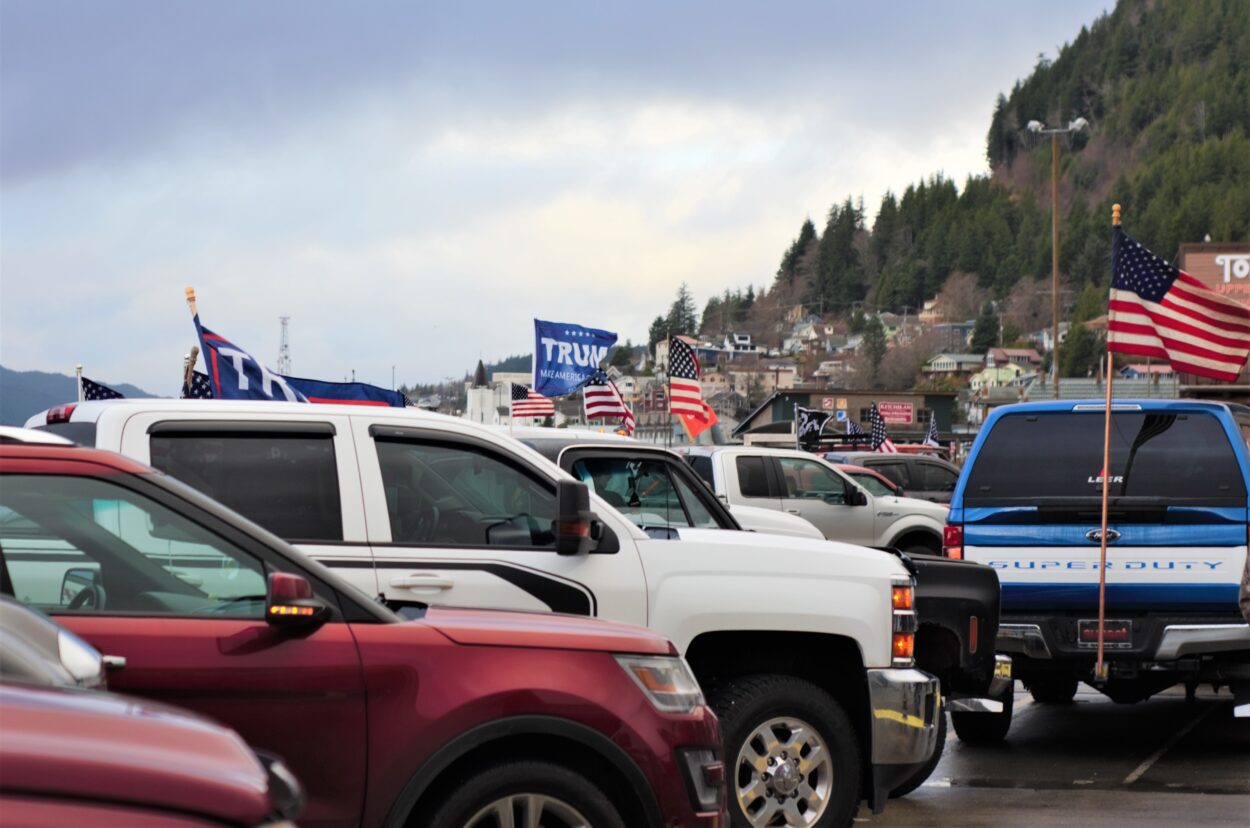 At least 100 vehicles, many waving flags, drove through downtown Ketchikan in what organizers called a “Patriot Parade”. Supporters of President Trump verbally clashed with counter-protesters days before Congress is set to certify the results of the 2020 presidential election.

Cars and trucks flying American and Trump campaign flags honked their horns and flashed their headlights as they drove south on Tongass Highway.

A callout on social media said: “The President of the United States will be chosen on January 6th and it’s important that Ketchikan is aware the Patriots are alive and well here.” 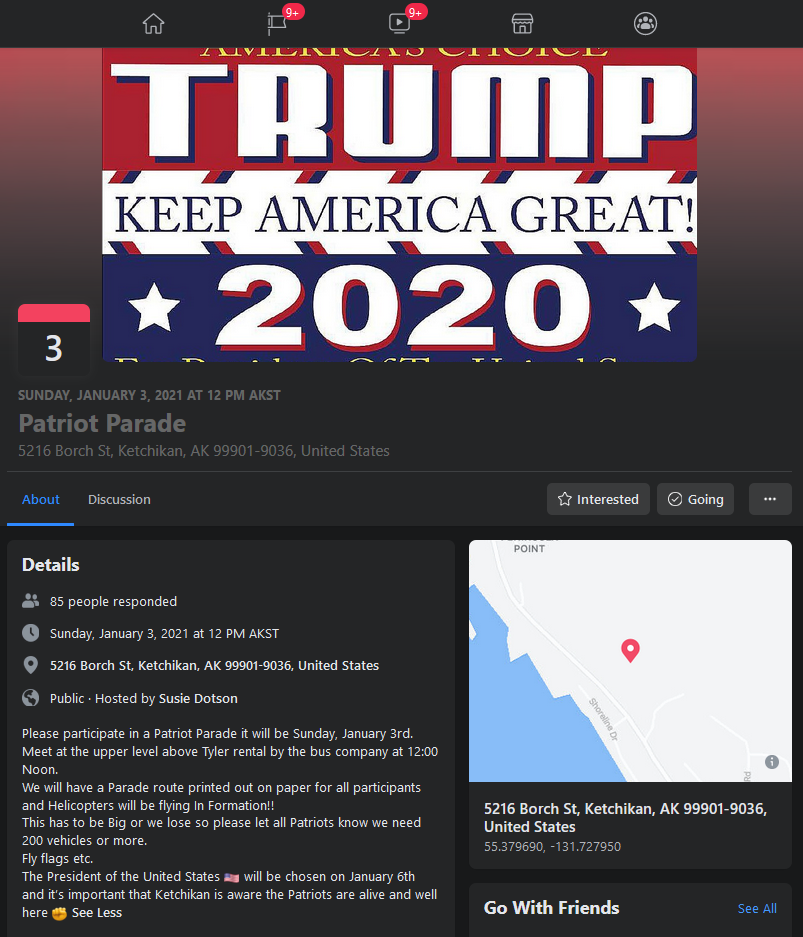 The sixth is when Congress certifies the results of the 2020 presidential election. It’s usually a formality. But so far, President Trump has refused to concede despite losing both the popular vote and electoral college by a significant margin to Joe Biden.

It’s not clear who made the flyer. Holman declined to speak on tape, saying with a grin that he prefers to work from the shadows. 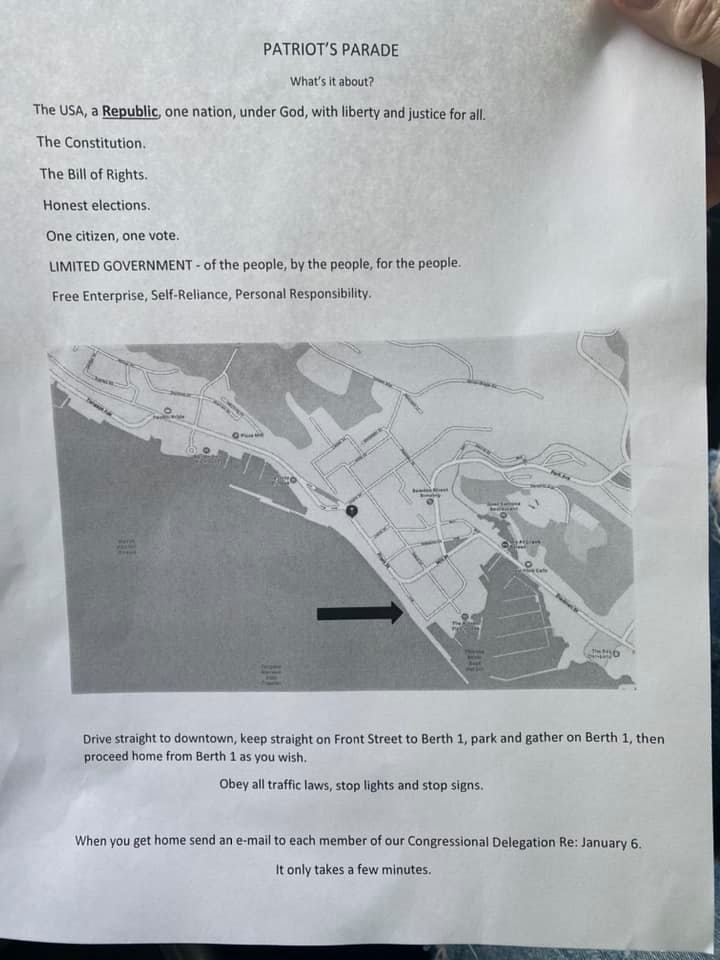 A flyer outlining the purpose of the parade. (Facebook)

But parade participant Corey Brown was in broad daylight and happy to chat. He flew an American flag from his white Ford pickup.

Political tensions continue to simmer. President Trump and his supporters continue to make unsubstantiated claims that the 2020 election results are tainted by fraud. So far, nearly every legal challenge has been dismissed by federal judges all the way to the Supreme Court.

Some Republican lawmakers  have said they’ll seek additional time to investigate the election during the Jan. 6 count.

A bipartisan group of 10 senators, including Alaska Sen. Lisa Murkowski, came out Sunday against the plan to challenge the results.

“The 2020 election is over,” the senators wrote in a statement on Sunday.

Talking to people on Sunday,  parade participants in Ketchikan weren’t focused on any one issue. One said the rally celebrated the 61st anniversary of Alaska’s statehood. Another said he hoped to ensure the next national election was more secure. Some said they accepted the results of the 2020 election, others did not. Brown was among those skeptical from voting machines to the pandemic.

“The proof’s in the pudding. It’s all over. The news on everything — on the Dominion machines, everything. It’s all — it’s all fake. What numbers can we trust? The coronavirus and everything,” Brown said.

A handful of counter-demonstrators, including a parent with kids, held signs saying things like: “New president, who dis?” Ketchikan resident Sean Harrelson posted a clip of himself confronting the small group that showed up to protest.

“How much further do I need to get? You want to protest, we’re protesting, you came, you brought — you brought your kids to the war zone. Who brings their kids to the battlefield?” asked Harrelson.

“Well you’re the one making it a fight. I’m just asking questions. Now all of a sudden I’m attacking your children? I ain’t even said nothing to them,” Harrelson said.

Hartley later told KRBD that she felt threatened. She took her kids home. Ketchikan police say no violence was reported.